The Russian spy story is John Brennan trying to stab Trump in the back. Again 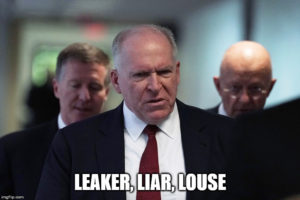 It’s the story of the spy extracted from Russia.

First, Jim Sciutto is told something and he breathlessly and factlessly pumps the story ad nauseum.

A person directly involved in the discussions said that the removal of the Russian was driven, in part, by concerns that President Donald Trump and his administration repeatedly mishandled classified intelligence and could contribute to exposing the covert source as a spy.

The Central Intelligence Agency on Monday evening slammed what it called CNN’s “misguided” and “simply false” reporting, after the cable channel’s chief national security correspondent authored a hole-filled piece claiming that the CIA had pulled a high-level spy out of Russia because President Trump had “repeatedly mishandled classified intelligence and could contribute to exposing the covert source as a spy.”

The CIA spent decades cultivating an informant who became so close to Russian President Vladimir Putin that the individual could photograph documents on his desk and send them back to U.S. intelligence officials, according to a series of shocking reports published by CNN, The New York Times and The Washington Post on Monday.

MOSCOW/LONDON (Reuters) – The Kremlin played down reports of a CIA spy inside Russia’s presidential administration, but said an official identified by Russian media as the likely U.S. mole had worked there although he did not have access to President Vladimir Putin.

Moreover, the Kremlin says the guy did work in the Russian Presidential staff but…

The Kremlin on Tuesday confirmed that an alleged US spy had worked in Russia’s presidential administration.

Kremlin spokesman Dmitry Peskov said that the person did not have direct access to President Vladimir Putin and that he was a low-level official “fired several years ago,” TASS news agency reported.

“His job was not classified as a senior position,” Peskov said, adding that he had no information about whether the person had been working for the US Central Intelligence Agency (CIA).

“All these speculations in US media outlets about urgently extracting him, from whom he was saved and so on — this, you know, is a kind of a ‘Pulp Fiction,'” said Peskov.

The word is that the CIA tried to extract the spy in 2016, but he initially refused and was finally extracted in 2017.

What does this super secret spy do once here?

He buys a house in the DC area under his own name and continues to live there.

This is where it all goes off the rails. Vladimir Putin is known to be vengeful to those who betray him. Yet somehow this guy (OS) has able to live serenely and safely in the DC suburbs for the last two years.

Joe Digenova says it was John Brennan who gave the name and the address of the spy to Sciutto and Dilanian. Brennan has dung on his face for his claim of Trump being a Russian agent and for his collusion predictions. This is was one more effort to discredit and bring down Trump. Dignenova also stated that had the CIA extracted a genuinely valuable asset no one would know about it or where the person was.

Laura Ingraham notes that the leaks have gone to the most gullible- those most willing to spread the lies.

It makes all the sense in the world.

The left has such a hunger for political power that they disregard national security. Following Hillary’s example, they will leak any information they feel supports their march towards socialism.

Scum. Who could support such trash?

John Brennan is a muslin; no caps. Here converted in Saudi Arabia and as such he is permitted to lie to me and you..

They are here to conquer, just ask them.

Here is a man who was a self-described Communist when he joined the CIA in the Reagan Administration, at the height of Cold War against the Soviet Union. A supposed expert in U.S. foreign policy toward the Middle East, as well as a fluent Arabic speaker, Brennan eventually rose to the rank of CIA station chief in Riyadh, Saudi Arabia (where he may or may not have converted to Islam).

While there, Brennan apparently developed a powerful case of “clientitis” (a term for when U.S. foreign policy experts become so involved in their regions of focus that they start substituting U.S. national interests for those of the countries they are observing).

Brennan routinely ignored calls from his colleagues to pressure his Saudi counterparts to hand over more information on bin Laden and the rising al-Qaeda terrorist network in the 1990s (al-Qaeda was, first and foremost, a political and religious movement consisting of and controlled mostly by Saudi nationals).

Things got so bad with Brennan that when the Clinton Administration considered using force either to kill or capture bin Laden in the 1990s, Brennan led the effort to stop it. Had Clinton followed through with his earlier promises of bringing bin Laden to justice, instead of listening to compromised bureaucrats like Brennan, 9/11 might have been avoided. Of course, it did not help that Clinton’s own CIA director, George Tenet, backed Brennan’s opposition to the proposed bin Laden raid.

When George W. Bush took office, inexplicably he chose to keep Tenet on as the director of central intelligence. Tenet, in turn, kept incompetents like Brennan in place (while either marginalizing or forcing out those few intelligence officials who actually took the al-Qaeda threat seriously, such as Richard Clarke and Michael Scheurer, the original head of the CIA’s bin Laden unit).

Sadly, Brennan would go on to enjoy a long career, even after 9/11.