Antifa finds out what happens when they screw with real cops 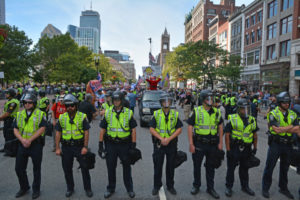 Antifa, the cowardly fascist organization that attacks anyone it deems unworthy, found out the hard way that, unlike the pathetic Portland Police, there are real cops who enforce the law they swore to uphold. The other day Antifa attacked those participating in the Straight Parade in Boston.

The unrest came after the counter-protesters and “Straight Pride” group — considered homophobic extremists by their opponents — staged dueling rallies in Boston.

There was no serious violence during the rallies themselves, which involved groups of several hundred.

But after the “Straight Pride” group had dispersed, the counter-protesters accused police of protecting “Nazis,” chanted “shame on you” and formed a human chain which police tried to get through, an AFP photographer said.

They found out the Boston Police Department was not going to let them wreak anarchy. Here is a video of the Antifa morons resisting police orders

“We’re covered in black so when we attack these guys we can’t be prosecuted,” said Jon Crowley, an Antifa member who told the Herald that he felt violence was the only way to deal with the people marching in the parade, which went from Copley Square to City Hall Plaza. “They are fascists, 100%. How else are you going to get them to shut up?”

Crowley clearly failed Irony 101. He also failed US Constitution 101. It was Antifa who attacked the parade participants. It is Antifa who seeks to silence anyone with whom they disagree.

36 people were arrested- all of the Antifa. To his great credit, the presiding Judge refused to dismiss the charges

A Boston Municipal Court judge on Tuesday refused to drop assault charges against dozens of people arrested at the “Straight Pride Parade” over the weekend, including one counterprotester who claims he did nothing wrong.

Boston police took 36 people into custody during the controversial event on Saturday.

Rod Webber, one of the counterprotesters of the parade, recorded himself getting arrested.

“I’d done nothing wrong so I calmly started to walk away and you can see my video because I turned my selfie stick around and you see that I was targeted,” he said. “I was put in a chokehold and put down and told I was under arrest and they really messed up my leg.”

The Antifa punks caused harm to the police. First they threw dirt and eggs at the Boston police and graduated to hurling bottles of chemicals and urine at them. Four cops were injured.

U.S. Reps. Ayanna Pressley and Alexandria Ocasio-Cortez, members of the so-called “squad” of new left-wing congresswomen, are backing the anti-Straight Pride protesters accused of assaulting cops and the marchers, and touting a fund for their defense.

An online fundraiser initiated by the Lucy Parsons Center, a Jamaica Plain anarchist bookstore, has raised more than $24,000 for the legal costs of the 36 people arrested at the Straight Pride Parade, including nine charged with assaulting cops.

Pressley, who represents much of Boston, Cambridge and Somerville, retweeted a link to the fund and told reporters in Boston Monday, “I don’t think they should have been arrested, and that’s why I’ve been promoting a bail fund to support them. … They were protesting a racist, fascist, demonstration.”

Ocasio-Cortez, of New York City, tweeted a link and wrote, “One way to support the local LGBTQ community impacted by Boston’s white supremacist parade? Contribute to the Bail Fund for the activists who put themselves on the line protecting the Boston community.”

The bookstore didn’t respond to a request for comment on Monday.

I am writing on behalf of the Boston Police Patrolmen’s Association to strongly protest your decision to urge your constituents to contribute to a bail fund for protesters arrested this weekend during the Straight Pride rally in downtown Boston. The Police are assigned to work at these kind of events in order to keep the peace and control any crowds or disorder. Whether someone was there as part of the rally or as a counter protest, the Boston Police officers are there to treat all the same and to maintain order. My members have informed me that the individuals who were arrested on Saturday were not peaceful protesters but were committing crimes of assault against Boston Police Officers. In fact at least four officers were injured by actions of some of the protesters. These officers were screamed at, abused and fought by these so-called peaceful protesters. Your actions in support of these individuals serves only to encourage criminal and disruptive behaviors such as those suffered by my members this weekend. This attitude also further contributes to the growing we/they attitude against police officers in this Country. As an elected official and particularly as someone who has historically worked with the Boston Police Department and the BPPA as a member of the Boston City Council you should be working to encourage Boston city residents and visitors to respect and cooperate with Boston Police officers who are there to serve and protect. The BPPA supports the right of free speech, but free speech does not include the right to abuse and assault the men and women who are appointed to keep the peace.

I urge you to reconsider your support of the protest bail fund. Instead, I hope you will make it clear to your supporters that you don’t approve of violent behavior against public safety personnel.

Good luck with that.

Kudos to the Boston Police Department for doing their duty. And for the record, this is who was arrested, courtesy of Andy Ngo