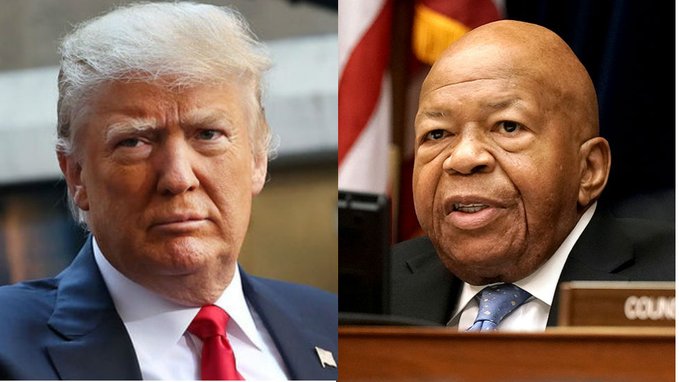 After taking a non-stop pounding from Elijah Cummings about how “immigrants” are being treated, Donald Trump ripped into him

Naturally, Nancy Pelosi immediately asserted that this was a racist attack.

“.@RepCummings is a champion in the Congress and the country for civil rights and economic justice, a beloved leader in Baltimore, and deeply valued colleague,” Pelosi tweeted. “We all reject racist attacks against him and support his steadfast leadership.”

It was anything but racist. Kimberly Klacik is a member of the Baltimore County Republican Central Committee and described by Fox News as a GOP strategist. She’s posted several videos on Twitter to make very clear that Trump has again hit the nail on the head. The stories are Klacik’s and of the people who actually live there:

Let's continue to expose the truth. This is a neighborhood filled w/families that have small children. West Baltimore is filled with trash thanks to dumping. A problem city officials should have addressed years ago. This is @RepCummings district. @realDonaldTrump

Residents constantly call the city to remove trash, no one shows up for months. Rats & roaches are a problem in almost every home. Illegal immigrants at the border live in better conditions than Americans in West Baltimore. This is @RepCummings district.

It is so sad to see @VictorBlackwell & @CNN turn the light currently shining on #WestBaltimore into a race issue. This could result in a positive change. @RepCummings could help get his district in order. Listen to one of his constituents explain the "rats & rodents" problem. pic.twitter.com/LTG8AnT27x

More trash. More concerned residents. People live in the home with the silver van. This is @RepCummings district. This has nothing to do with race. Let us all pray the city removes the trash & install cameras to catch the individuals dumping on the property. #WestBaltimore pic.twitter.com/CCaRH5c0aO

Check out the comments

The people who live there have something to say

In this video, @RepCummings constituents explain how clean Coppin State University is kept, while their neighborhood is used as a dumping ground. I was told if trash was not in marked green cans, the city refused to remove it. More abandoned row houses. #WestBaltimore pic.twitter.com/wuSNoiNJED

“Trump is not racist … I’m glad he put [Cummings] on blast. The rats just didn’t come. These houses just didn’t get torn down, they’ve been like this”

The scene provided dramatic visuals of the economic inequality Sanders has made the center of his campaign, offering a new backdrop from which to argue for a higher minimum wage, tuition-free public college and tougher federal regulations of the nation’s banking sector.

“Anyone who took the walk that we took around this neighborhood would not think you’re in a wealthy nation,” Sanders told reporters later at the Freddie Gray Empowerment Center in Bolton Hill. “You would think that you were in a Third World country.”

Cummings presides over a sh*thole and his constituents are actually worse off than those being detained at the border.

Democrats ignore problems they cause

Rep Cumming's Baltimore has a murder rate twice that of Guatemala

Guatemala has one of the highest murder rates in Latin America at 25.6 per 100,000 people in a year

And where is that dumbass Alyssa Milano?

Kim Klacik is under attack from the left

If you decide to photoshop a tweet/DM/photo of me, 3 things…

Someone is trying hard to hack my social media accounts. If you don't think I would say it, or post it, there is a 100% chance I did not. pic.twitter.com/AoY2rN5LWr

This is why nothing can get better in Baltimore

Just Google “world’s most dangerous cities,” and Baltimore comes in at number 21. For context, #20 is Juarez, Mexico, and there is a narco war happening there. In terms of violent crime, Baltimore is more violent than most 3rd world crap places. Baltimore has not elected a Republican as mayor since 1963. The people of Baltimore have been electing incompetent, corrupt, and downright stupid Democrats (that’s not to say all Dems are stupid) for at least half a century, with predictable results.

The sorry state of so many of our once-great one-party Democrat-run cities is an absolute disgrace and total embarrassment.

Where was the outrage?

Why can’t we have a clean city? It’s a problem that has perplexed generations of mayors in Baltimore. Call it the perpetual trash nemesis.

Decades of tactics have been tried to beat it. William Donald Schaefer’s Trashball campaign urged people to ball up their debris and toss it into a receptacle like a two-point shot. Kurt L. Schmoke banked on people idolizing Cal Ripken Jr. enough to convince them to pick up after themselves as part of his “It’s Your Baltimore. Don’t Trash It!” initiative, while Sheila Dixon tried to disgust people into doing better with photos of rats. Her “Cleaner, Greener Baltimore Initiative”also included adding hundreds of trash cans around the city and reducing trash pickup to focus more on recycling. Then there was Martin O’Malley, who made a big splash showing up to neighborhoods like a rock star clad in a jumpsuit and hanging from the back of a trash truck as part of an eight-day clean-up tour early in his administration.

Yet, here we are again in a mess of a city. Food containers, balled up clothes, paper, banana peels, plastic bags and tons of other pieces of litter line the shoulders of roads, pile up in alleys and are strewn across fields and yards. Not only is it unsightly and contributes to a rodent problem, but it can create a glum and gloomy feel in a time when the city is already facing self-esteem issues because of high crime and the scandal surrounding the University Maryland Medical System and Mayor Catherine Pugh, who’s now on an indefinite leave, and her Healthy Holly books. If anything, the city needs a major scrubbing to help restore some of its faith and image.

The Housing Authority of Baltimore City says after a year of aggressively going after vermin in its public housing complexes, the rat population is down 82 percent and hundreds of citations have been issued in the surrounding neighborhoods to help combat the pests.

At the Perkins Homes complex in East Baltimore, however, residents Tonya Jackson and James Morton scoffed at the reported success.

“We have very bad problems,” said Jackson, 47, who has lived at Perkins for 12 years. “They reduced nothing.”

Morton, 55, a resident of six years, added, “Mice in the homes, rats outside.”

Elijah Cummings has been in Congress for over 20 years

President Trump is right and Cummings should be held responsible

Trump Was Right: Orkin Lists Baltimore as One of Most Rat-Infested US Cities

Charm City is once again among America’s “Rattiest Cities,” according to a new report from pest control company Orkin, although it has shown progress in each of the past two years. Baltimore comes in at No. 9 on the company’s 2018 rankings released Monday.

This is the fourth year that Orkin has compiled the rankings, which are based on the number of rodent treatments the company performed from Sept. 15, 2017 to Sept. 15, 2018. It includes both residential and commercial treatments.

Baltimore dropped one slot from last year, when it was ranked eighth; two years ago it was No. 6 on the Orkin list. The city has undertaken several rat control measures, including the issuance of municipal garbage cans to contain waste.

A rat runs through a FOX45 Baltimore Reporter’s live shot during a story on President Trump’s tweet Baltimore is rat infestedhttps://t.co/s60inZ6TtK pic.twitter.com/R4LFxsPWeK

Login
wpDiscuz
82
0
Would love your thoughts, please comment.x
()
x
| Reply
‹ Back to Categories