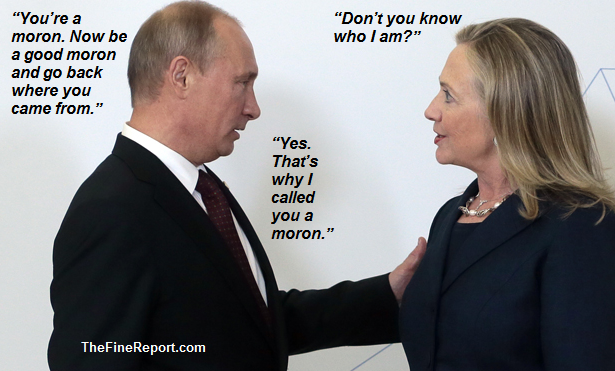 This is collusion. The real thing.

The references to Trubnikov and Surkov, which have not previously been reported, are not definitive proof that either were sources for Steele’s dossier or that they were involved in an effort to collect blackmail material on Trump.

But the notes are significant because they are the first government documents that show Steele discussing potential sources for the information in his dossier, which the former MI6 officer provided to the FBI.

What this demonstrates for the first time is that the dirt in the dossier came from high ranking Russian officials. Interestingly, Trubnikov is linked to Stefan Halper. Steele poured it on to Kavalec:

Kavalec’s notes said Steele claimed Trump was “filmed engaged in compromising activities” with Russian prostitutes in 2013, but that “the Russians have not needed to use the ‘kompromat’ on [Trump] as he was already in cooperation.”

Steele, who operates a private intelligence firm in London, told Kavalec that Putin and some of his top advisers were running the Trump operation.

Steele swallowed whole the load of nonsense fed to him by the Russians because he hated Trump and uninterested in facts:

“They never stop,” Hoffman said of Russian intelligence operatives. “There’s no such thing as a former intelligence officer. The guy is going to be reporting back to the SVR or Putin.”

Hoffman has been a leading proponent of one theory about the dossier that has gained traction in the wake of the special counsel’s report. The former CIA officer has argued Steele likely fell victim to a Russian disinformation campaign.

A growing number of experts in Russian intelligence operations have embraced the theory, and Attorney General William Barr testified to Congress on May 1 that he is concerned about the prospect and is looking into it.

There is a very good article from Hoffman here, in which he states that the ultimate goal of the Kremlin was to undermine faith in the US electoral system. In that, Putin succeeded beyond his wildest dreams with democrats acting as his useful idiots. This is an FA post from a year ago February:

The Russian government had a strategic goal to “sow discord in the U.S. political system, including the 2016 presidential election” the indictment reads. The indictment also revealed activity pursued by the Russians to organize political rallies, building partisan social media audiences across the political spectrum, and funding political stunts.

According to Mueller, the Russian government created a sub agency known as the “translator project” which was “focused on the U.S. population and conducted operations on social media platforms including Facebook, Twitter, Instagram, and YouTube” adding that the strategic goal of interfering in the 2016 US election was developed all the way back in May 2014.

The stated goal within the department was to spread “distrust towards candidates at the political system in general.”

Like I said, they succeeded beyond anything they were hoping for, thanks to democrats who still bitterly cling to the false Russian narrative. We now know that all of the salacious dirt thrown at Trump was propaganda and there was no collusion.

Mueller’s investigation “did not find that the Trump campaign, or anyone associated with it, conspired or coordinated” with Russians who worked on those hacking efforts “despite multiple offers from Russian-affiliated individuals to assist the Trump campaign,” Barr detailed in his letter.

There was a dossier. A phony document. Comey used the “salacious and unverified” information in the dossier, to coin a phrase, blackmail Trump. 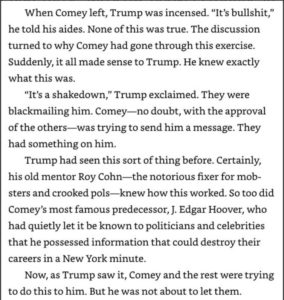 A former top FBI lawyer said there was concern at the bureau that then-FBI Director James Comey was trying to blackmail then-President-elect Donald Trump with the notorious Steele dossier.

On Tuesday’s Yahoo News podcast “Skullduggery,” James Baker described the atmosphere as “quite worried” after Comey met with Trump on Jan. 6, 2017, shortly before his inauguration. Baker says the way Comey threw the dossier into Trump’s face, it was difficult not to draw “analogies” to the behavior of FBI founding Director J. Edgar Hoover, who ruled federal law enforcement for nearly 50 years.

The dossier, containing allegations that Trump demanded perverse sex from Russian prostitutes, has been pilloried by some as an invention. During Congressional testimony, former Trump lawyer Michael Cohen said he had never been to Prague, where the dossier contends Cohen went to collude with Kremlin officials on Russian election meddling.

Investigative reporter Michael Isikoff, who met with Steele, has said that there are a myriad of problems with the dossier.

“I think it’s fair to say that all of us should have approached this, in retrospect, with more skepticism, particularly when we didn’t know where it was coming from,” Isikoff told Vanity Fair.

No kidding. It’s pretty clear that Comey was clearly attempting to leverage Trump, i.e. blackmail him.

Now while the finger pointing continues, all the mouthing off from the left is simply noise to distract from the unassailable fact-  hillary clinton and the DNC colluded with the Kremlin to obtain disinformation to attempt to prevent Trump’s election and then to overthrow him.

Peter Strzok opening a counter-intelligence investigation based on Russian disinformation is shameful and inexcusable.

No matter how you look at it, this was a conspiracy. It is also true that hillary clinton and the DNC can and should be held accountable for what was done to Trump. After all, if you hire an assassin to have someone killed you are just as guilty as the assassin.

There is great conflict between Brennan, Clapper and Comey as to who insisted the garbage dossier be included in the IC assessment. It’s time for AG William Barr insist they testify under oath in public. Never before has opposition research been the basis for action by American Intelligence agencies to spy on and take action against political candidates.

Steele could not vouch for the validity of the claims in the dirty dossier but without it, no FISA warrant.

But here’s the bottom line.

Hillary Clinton and the DNC paid a foreign spy to obtain salacious false Russian disinformation which was then used -without verification- by the CIA, the FBI and the NSA against an American Presidential candidate to deter his election and subsequently against the President of the United States in an effort to depose him.

There’s only one word for that.