The panic and finger pointing have begun! You can smell the fear 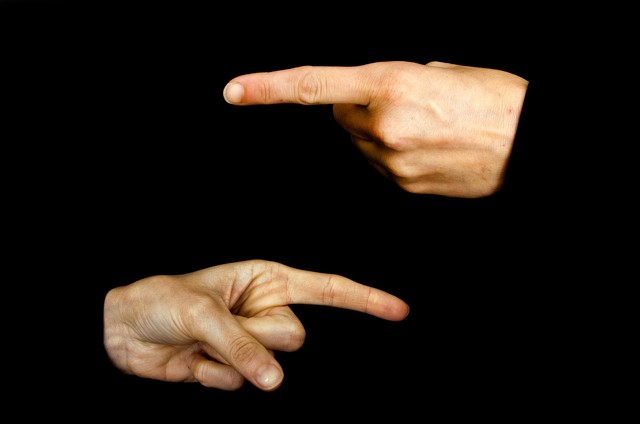 There was a movie in 1971 called “The Panic in Needle Park” starring Al Pacino.

A couple loves heroin as much as they love each other in Jerry Schatzberg’s grim drug drama. After an illegal abortion at the behest of her faithless lover (Raul Julia), lost innocent Helen (Kitty Winn) finds solace with small-time crook Bobby (Al Pacino), a regular in Manhattan’s “Needle Park.” As Bobby shows her around his Upper West Side world, the two become inseparable. When Helen realizes that Bobby is a full-blown junkie, she joins him in addiction, and their downward spiral begins in earnest. Weathering overdoses, prostitution, betrayals, and a “panic” after a major bust, the pair manages to stick together, the habit sealing their fate.

I thought I might call this post “The Panic in IC Park” but I realized that the allusion might not find much familiarity but the IC is indeed panicking. The finger pointing has begun.

A high-level dispute over which senior government officials pushed the unverified Steele dossier amid efforts to surveil the Trump campaign has broken out into the open again, after it emerged that Attorney General William Barr appointed a U.S. attorney to examine the origins of the Russia investigation and determine if the FBI and DOJ’s actions were “lawful and appropriate.”

Fox News was told that the email chain – not yet public — referred to the dos sier as “crown material,” but it was not clear why this apparent code was used. On Tuesday night, former GOP Rep. Trey Gowdy said on Fox News’ “The Story with Martha MacCallum” that “Comey has a better argument than Brennan, based on what I’ve seen.”

But no, says the CIA, it’s Comey’s doing

But in a statement to Fox News, a former CIA official put the blame squarely on Comey.

“Former Director Brennan, along with former [Director of National Intelligence] James Clapper, are the ones who opposed James Comey’s recommendation that the Steele Dossier be included in the intelligence report,” the official said.

I can remember when John Brennan was bragging about how he instigated this investigation. He claims to have gotten the ball rolling:

“I encountered . . . intelligence that revealed contacts and interactions between Russian officials and U.S. persons involved in the Trump campaign,” Brennan said, adding that he did not see conclusive evidence of collusion but feared that Trump associates were wittingly or unwittingly being used to advance the interests of Moscow.….Brennan testified that he was disturbed by intelligence that surfaced last year showing a pattern of contacts between Russian agents or representatives and people with links to the Trump campaign. “That raised concerns in my mind,” Brennan said….With that remark, Brennan appeared to identify the point of origin of the FBI investigation that began in July — the first time a U.S. official has provided insight into what prompted the bureau probe.

Yet to the time he left office he had seen no evidence of collusion. Despite that, Brennan ramped up his accusations to “treason” level. More:

“I wanted to make sure that every information and bit of intelligence that we had was shared with the bureau [FBI] so that they could take it. It was well beyond my mandate as director of CIA to follow on any of those leads that involved U.S. persons. But I made sure that anything that was involving U.S. persons, including anything involving the individuals involved in the Trump campaign, was shared with the bureau.”

He never warned Trump. He never asked Trump about it. No defensive briefing. He wanted Trump taken down. Period. Trey Gowdy suggests that Brennan is more peril than is Comey. He is probably correct.

The declassified January 2017 report determined Russia had ordered an “influence campaign” to help Trump get elected in 2016. There is no mention of the dossier, compiled by British ex-spy Christopher Steele, which contained salacious and unverified claims about Trump’s ties to Russia. It was used by the FBI to obtain a series of Foreign Intelligence Surveillance Act warrants to wiretap one-time Trump campaign adviser Carter Page.

There have been reports, including by veteran journalist Bob Woodward, that the dossier was included in an early draft of the assessment. Sen. Rand Paul, R-Ky., said in March he was told Brennan “insisted” the dossier be included in the report. “BREAKING: A high-level source tells me it was Brennan who insisted that the unverified and fake Steele dossier be included in the Intelligence Report … Brennan should be asked to testify under oath in Congress ASAP,” Paul tweeted.

“The inspector general is looking at everything we did,” Baker said on CNN. “If the IG usually finds mistakes that we made, so I expect him to find mistakes this time.”

Baker said last week at an event in Washington, D.C., that he took a leading role in overseeing the FISA warrant applications to obtain the authority to spy on Page. Baker said on Monday he does not believe there was any intent from the people he worked with to do “anything wrong or illegal,” including politically motivated spying.

The panic is not limited to the former IC community. The media is becoming totally unglued.

During an interview with former CIA Director John Brennan, MSNBC host Nicole Wallace asked why Attorney General William Barr described the FBI’s surveillance of the Trump campaign as “spying” and suggested the top law enforcement official may have “watched too much Sean Hannity.”

“Congressman, it’s an embarrassment to have an Attorney general who looks like a Roy Cohn, a guy who will do anything to defend the president and now has become his hitman. Not only will he play defense, he’s out to destroy the government, the FBI, everything in order to cover the tracks of the president. What do you make of this guy and how can you stop Barr from doing what he’s out to do now, destroy the FBI?”

CNN’s Jeffrey Toobin said tonight that Attorney General Bill Barr assigning a U.S. attorney to oversee the investigation into the origins of the Russia probe sends a “chilling message.”

He called this a “completely unnecessary” investigation that’s going to be “harassing people” for doing their jobs.

Lawrence O’Donnell was apoplectic about Lindsey Graham doing his due diligence:

Todd really wanted to know when “Democrats [were] going to try to take control of this situation”. He even slammed the judgment of prominent Democratic leaders. “[I]t seems as if congressional Democrats didn’t — I think that Speaker Pelosi and frankly Chairman Cummings and Chairman Schiff and Chairman Nadler all thought, ‘you know, they’ll eventually cooperate, they’re not going to do this.’ Oh, yes, they are,” he mocked.

Democratic strategist Basil Smikle tried to assure Todd that congressional Democrats had everything under control and were just trying to be methodical. But Todd wasn’t buying it.

And the key line:

“I understand the larger picture is we’re trying to do our job holding the executive branch accountable. Pick one,” he snapped after reading off the laundry list of probes and subpoenas one more time. “You got to prioritize. I – I – this is a fight. Does [Pelosi] need to prioritize this?”

“We’re trying to do our job”

That’s a clear admission that PMSNBC is an arm of the DNC.

That other ditz AOC is calling for Lindsey Graham to resign.

I remember Schumer saying things like this weren’t smart because the IC could get back at you six ways from Sunday.  Well, so can the Attorney General of the United States.

“I think people like that, like Rod Rosenstein, who are people of accomplishment but not real sterling character, strong character, find themselves trapped. And then they start telling themselves a story to justify their being trapped which is, ‘Yeah, he’s awful but the country needs me,’” Comey told host Anderson Cooper.

Rosenstein has returned the fire.

Rod Rosenstein unloaded on former FBI Director James Comey in remarks to the Greater Baltimore Committee (GBC) on Monday evening, slamming Comey’s turn as a “partisan pundit,” reiterating that he deserved to be fired, and faulting him for trampling “bright lines that should never be crossed.”

In what can only be described a colossal failure to grasp irony Adam “Schitt” said campaigns should not be able to get foreign help.

You know, like employing a British spy to collect Russian propaganda and use foreign opposition research to secure a FISA warrant. This is the first time it’s ever happened.

Or how about flying a campaign staff member to a foreign country so you could use the CIA to spy on him?

While at first I am tempted to become angry at these idiocies I avoid it. As we approach the end game the cacophony will grown even louder. It will be amusing to see Brennan “frog marched” into prison for treason and Comey locked up for perjury. He can share a cell with McCabe.

This is a glorious time. The irony is that in trying to overthrow a duly elected President of the United States, they will have guaranteed Trump’s re-election.