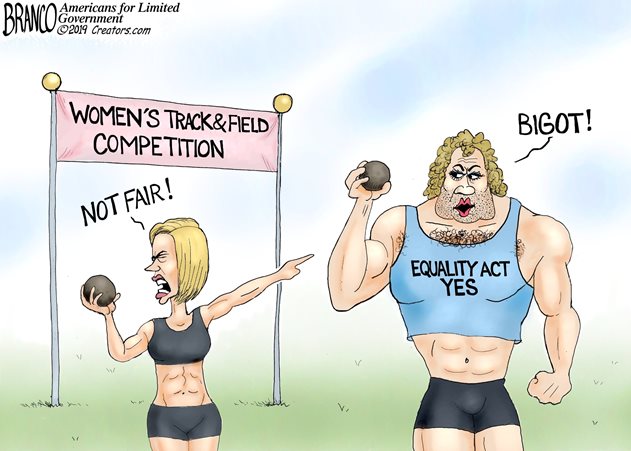 Welcome back, everyone! First let’s go back to the ancient times of last week with a few to lead off the insanity that comes from our Lefty pals:

Following the Bro-Fo Omar model, the newest form of hate speech from Conservatives is to accurately quote Leftists

Not that they give a damn, but if there are any sane members left of the gay community, taking a stand against something as wrong as this would do a lot more to showing us normals that not all Leftists are hateful and intolerant

To paraphrase an old joke that I remember hearing about frat boys:
“How many Barack Obamas does it take to change a light bulb?”
“One. He just holds it up and the world revolves around him.”

05/04 – Pelosi Wants Progressives To Rein In Their Message. She’s Afraid Trump Will Make This Move If They Don’t.

As much as I dislike Pelosi, I wish our side were as brilliant at tactics as she is. That said, I love how she’s now basically powerless to stop the “Bats*** Crazy Caucus” that’s taking over her party.

05/05 – The Einstein working for the Senate Democrats

I love stories like these – poll gets launched. Rude surprise follows.

Isn’t the honesty refreshing now that Democrats no longer feel the need to hide how much they hate half of this country? And he also wants to dox some teenagers.

05/07 – Crushed by the Leftist Juggernaut: One Lawyer’s Story

A scary and sobering look at how one half of the country feels it is OK to treat the other. And I would add that as it continues to get worse, the Vichy Conservatives still seem to think that it’s ungentlemanly to fight back.

I’d take The American Spectator’s R. Emmett Tyrell’s assertion that Democrats haven’t lost a presidential election since 1956 – when is the last time the Dems’ ran a presidential nominee who didn’t hate America? I’d argue that it was Gore, as he didn’t seem to hate us until after we rejected him.

To steal that great phrase I recall Rush using years ago as a take on FDR’s most famous line, “The Democrats’ new slogan should be, The only thing we have to offer is… fear itself!”

Stories like this make me want to go bak in time to cancel my subscription to National Review a few years ago, as opposed to last month.

From the archives, remember Occupy Wall Street? While folks from our side got annoyed at having these thugs and vandals compared to the Tea Party, I pointed that It turns out that the OWS Protesters Are Just Like the Tea Partiers After All!

One last note regarding this week’s Twitter roundup – while I generally keep them on the humorous/mocking side, the first one is pretty heavy and has a thread below it well worth reading. Keep it handy for any of your Lefty friends who’ve never read a history book and need to be educated at to what Nazis actually were.

On that cheery note, have a great weekend, everybody!

My grandfather was sent to Auschwitz when he was just 10 years old. During his time there, he had two face to face encounters with the notorious Dr. Mengele. These are those two encounters:

Named the Official Shampoo of the #Biden2020 campaign. pic.twitter.com/qwy5wnVusc

Why must racist Democrats hold non-white people to lower standards of behavior?

Obama's FBI sent an undercover agent to lie about her identity in a subterfuge to get intel on a GOP candidate, which is not spying because shut up. https://t.co/xuHpfMDGGd

The Babylon Bee is Your Trusted Source For Christian News Satire.

This weeks selection goes out to Congressman Cohen

If you watch the entire video please get an I’m with her T-shirt and ..go stand over there, a little futher, a little further…..

Democrats sure get a chubby trying to tell people what they can and can’t say. However, as is usually the case, when they go the most insane over a Trump statement is when Trump is absolutely accurate. Their inner Goebbels is coming out.

And police state Democrats look on in awe and envy. No, what they exhibit is proof that certain ideologies should never have political power. NEVER.

Well, she was the “most capable candidate ever”, so she must have had it stolen from her as a direct insult to his greatness. Or something.

Nothing to worry about; not a single MAGA cap.

05/04 – Pelosi Wants Progressives To Rein In Their Message. She’s Afraid Trump Will Make This Move If They Don’t.

So, she’s afraid Trump would just copy what they have been doing? While it has succeeded at being disruptive, it has not accomplished much else. No doubt if they had a close victory, they could just “find” more boxes of votes.

05/05 – The Einstein working for the Senate Democrats

So maybe now there will be fewer false accusations brought against Supreme Court nominees like Kavanaugh?

If only Republicans had such brave warriors. I bet he could beat the $hit out of a two-year-old.

05/07 – Crushed by the Leftist Juggernaut: One Lawyer’s Story

So, once the moderate and honest are driven out of the justice system, what will they be replaced with? People like those who drove a qualified person out of the business? The left loves them some police state. Just ask Nadler and Cummings.

Why wouldn’t they be sore losers? They work hard trying to defraud every election.

The coup was their last best hope. I mean… look at their candidates.

Those afraid to see their political nest on the ground vanish through someone like Trump upending the political world will say and do anything to prevent it… even support the most corrupt, incompetent, lying criminal to have ever run for the office of President.

@kitt: A one hour remix?!? How on Earth did you find that?

The coup was their last best hope. I mean… look at their candidates.

Yeah, when your best hope is Biden’s hair plugs against a roaring economy you’ve got problems

@Brother Bob: I mean, who would be Biden’s “assassination insurance”? He’d have to have someone like Maxine Waters or Sandy Cortez as VP to discourage would-be assassins.

so when the demorat media determine what the President of the United States can say?? accordingly, now the radical left informs America that is alright to SPY on a presidential campaign: so why did G.Godron Liddy and associates go to prison? slut hilary says the demorats can do everything illegal but the conservatives “Republicans” can not engage in this behavior because it would be illegal. the HYPOCRISY is overwhelming

Sims isn’t so tough when confronted by someone his own size. As a matter of fact, he comes off as a little bit chicken like most bullies.

@another vet: I saw that too – awesome!