The key to everything 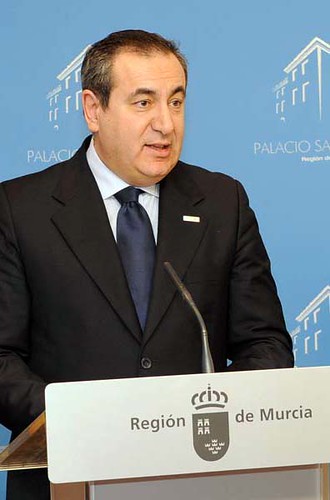 Josef Mifsud is the key to everything. A year ago I first brought this up and it is more critical now than it was then because we have Mueller adding to the haze around Mifsud.

Who is Josef Mifsud?

Josef Mifsud is a mysterious figure and who he is depends on who you ask. Wikipedia describes him this way:

Joseph Mifsud (born 1960)[1] is a Maltese academic, with reportedly high level connections to the Russian government.[2] In 2016, he became involved with George Papadopoulos, an advisor to the Donald Trump presidential campaign, and was later accused of being a link between that campaign and Russia. In 2018, he was described as missing, and an Italian court listed his location as “residence unknown”.[3] According to media reports he is in Rome as of April 2019.[4] In an April 2019 interview Rudy Giuliani revealed that Mifsud was a “…Maltese counterintelligence guy“[5]

Mifsud is not named in court documents released on Monday, which describe how the campaign aide, George Papadopoulos, lied to investigatorsabout his contacts with “foreign agents”. But his biography and movements between Rome, London and Moscow, match those of the unnamed “professor” described in the court documents. On Tuesday, he acknowledged to the Daily Telegraph that he was the man described in the papers, but denied any wrongdoing, or knowledge of the Clinton emails.

The court documents paint him as a stealthy operator with links deep inside the Kremlin. While initially uninterested in Papadopoulos, Mifsud’s attitude changed once he learned that Papadopoulos was working for the Trump campaign, the documents say.

As of March 2016, Mifsud was the honorary director of the London Academy of Diplomacy, located at the University of Stirling, according to the most recent cached version of an online biography. (The webpage was down on Monday afternoon and Tuesday morning.) He is the former president of the Slovenia-based Euro-Mediterranean University, also known as EMUNI University, and he was a professor at the University of Stirling in Scotland and the University of East Anglia in England, according to the biography. He apparently specialized in “international relations, public administration and management, public-private partnerships, diplomacy and Euro-Mediterranean studies.”

A spokesperson for the University of Stirling has told multiple press outlets that Mifsud is currently a full-time teaching fellow in the politics department there.

He previously served in Malta’s ministry of foreign affairs and, in the 1990s, as chief adviser to that country’s ministry of education. He helped Malta enter the European Union, the biography said. Despite the apparent secrecy around his connection to Papadopoulos, he has given many interviews, a number of which appear on YouTube.

The Mueller Report paints Mifsud as a Russian asset. 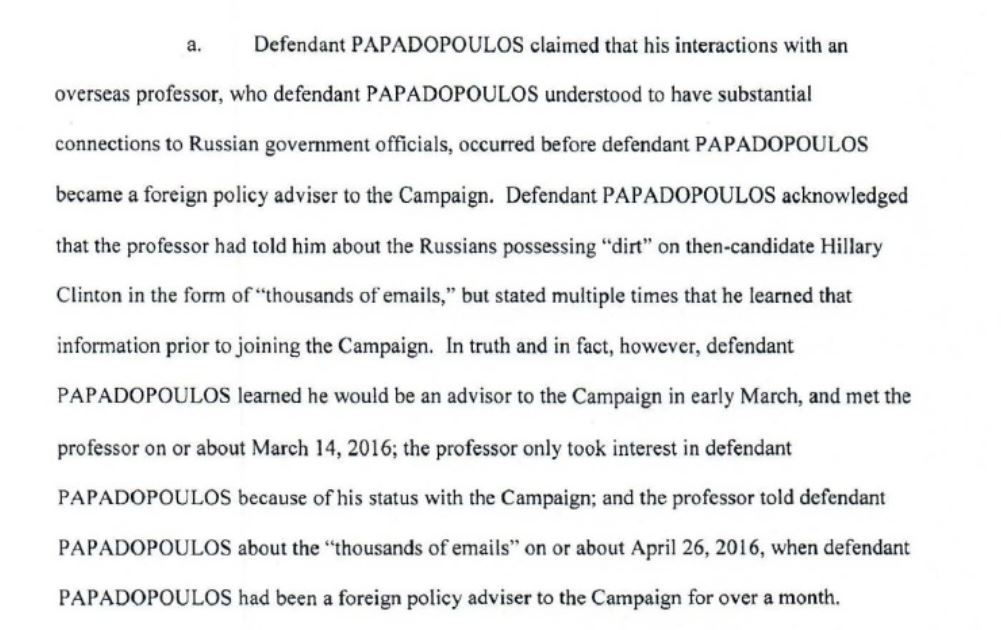 But there’s more. Much more.

Nunes, the ranking member of the House Intelligence Committee, seeks to get to the bottom of Mifsud’s allegiances. In a letter sent Friday, the Republican asked the heads of the CIA, FBI, National Security Agency and State Department for documents related to the professor, who has been in hiding since October 2017, when he was named in Papadopoulos’s court documents.

Papadopoulos pleaded guilty on Oct. 5, 2017 to making false statements to the FBI about the timing of his interactions with Mifsud. He told FBI agents in January 2017 that he met Mifsud before joining the Trump campaign.

Papadopoulos did tell the FBI during that interview about a bombshell Mifsud dropped on him during a meeting in London on April 26, 2016. Papadopoulos said Mifsud claimed to have learned that Russia had “dirt” on Clinton in the form of “thousands” of her emails.

If Mifsud was affiliated with Russians, as the special counsel’s report suggested, “then an incredibly wide range of Western institutions and individuals may have been compromised by him, including our own State Department,” Nunes wrote in the letter, which was obtained by The Daily Caller News Foundation and first reported by Fox News.

Mifsud, who once served as a Maltese diplomat, taught at Link Campus, a Rome-based university that has close ties to Western intelligence agencies, including the FBI and CIA. Mifsud was interviewed by the FBI about his Papadopoulos contacts during a visit to the U.S. in February 2017.

Mueller also claims that Mifsud lied to the FBI about his contacts with Papadopoulos, but Mifsud was not charged.

Special counsel Robert Mueller alleges in his report on the Russia investigation that Mifsud lied to the FBI about the timeline of his contacts with George Papadopoulos, the Trump campaign adviser whom the FBI claims was the catalyst for the bureau’s collusion investigation.

Also on Thursday, an Italian newspaper revealed that after Mifsud was first linked to Papadopoulos, he allegedly went into hiding for months, living at a Rome apartment owned by Link International. The company controls Link Campus, a university in Rome that partners closely with Western intelligence agencies. (

The developments raise several questions about Mifsud, including whether he is more closely affiliated with Russia or with the West.

It is also not clear why Mifsud was not charged in the Mueller probe.

The report does not discuss whether charges were considered against the Maltese mystery man. But his treatment is in contrast with how the Mueller team handled Papadopoulos. The former Trump aide pleaded guilty in October 2017 to making false statements to the FBI about Mifsud during an interview Jan. 27, 2017.

Why wasn’t Mifsud charged? Inquiring minds want to know. Here’s where it gets interesting. This timeline comes from the FBI Statement of Offense against Papadopoulos.

March 6, 2016- Papadopoulos learns he would be a foreign policy advisor.

March 14, 2016- A mere eight days later Mifsud finds and “meets” Papadopoulos in Italy. Almost impossible to be a coincidence.

March 21, 2016- Papadopoulos is identified as an advisor the Trump campaign by the Washington Post.

March 24, 2016- Pdop meets with the “professor” in London. Mifsud is accompanied by Olga Polonskaya.

April 26, 2016- Mifsud tells Pdop that the Russians had “dirt” in the form of “thousands of emails” on Hillary Clinton.

May 4, 2016- Pdop gives interview to the London Times critical of David Cameron. Alexander Downer seeks to meet with Pdop via Erica Thompson.

The media misreported it badly. According to Downer, Pdop said “damaging material”– not “emails” and not “dirt.” And George had a single glass of wine.

Downer passes the information directly to the FBI. Jeff Carlson:

Early reporting by the Sydney Herald noted the following:

The ambassador to the United States Joe Hockey personally steered Australia’s dealings with the FBI on explosive revelations of Russian hacking during last year’s presidential campaign. Mr Downer conveyed the conversation to Canberra via an official cable, though apparently not immediately – perhaps because he did not take the 28-year-old adviser’s claims altogether seriously until the hacked emails were released by Wikileaks in late July.

On May 31, 2018, Kimberley Strassel of the WSJ reported a differing sequence of events:

A diplomatic source tells me Mr. Hockey neither transmitted any information to the FBI nor was approached by the U.S. about the tip. Rather, it was Mr. Downer who at some point decided to convey his information – to the U.S. Embassy in London.

Enter Stefan Halper, whose job it appears is to ensnare Papadopoulos and Carter Page.

September 15, 2016- Pdop travels to England, meets with Halper and and under cover investigator Azra Turk. Turk sends emails to Pdop that she looks forward to their meeting. Media reports suggest she is FBI, Pdop thinks she was CIA but reporter Adam Goldberg won’t say any more than that she is a “government investigator.” There is an implication that Turk might be an American citizen. During their meeting Halper is reported to have asked Pdop  “George, you know about hacking the emails from Russia, right?” and Turk is reported to have directly asked Pdop if the Trump campaign was working with Russia. He denied it.

October 21, 2016- First FISA warrant is granted– on Carter Page, not Papadopoulos. Page had already left the Trump campaign on September 26, 2016, but three renewals were granted.

As Nunes states, there was no intelligence upon which to open an investigation on Papadopoulos.

At this point it’s worth noting a critical disclosure made by Devin Nunes. There was no official intelligence used in the opening of the FBI’s Counterintelligence Investigation on July 31, 2016:

The ramifications of this are important. Australian Intelligence did not alert the FBI.

In his letter, Nunes questioned how the FBI would have known to press Papadopoulos about Clinton’s emails, given that he did not mention emails to Downer.

Downer has connections to both British intelligence and the Clinton Foundation.

Josef Mifsud is at the nexus of all of this. At this time I think there are two possibilities:

One, Mifsud was dispatched by Brennan to plant the stolen Clinton email story with Papadopoulos and then used Halper to bolster the collusion BS to take Trump down. The obama administration has a long history of spying on US citizens and FISA abuse.

FISA abuses were ongoing from at least November 1, 2015 through May 1, 2016. They almost certainly started earlier.

A non-compliance rate of 85% raises substantial questions about the propriety of using [Redacted] to query FISA data. While the government reports that it is unable to provide a reliable estimate of the number of non-compliant queries since 2012, there is no apparent reason to believe the November 2015-April 2016 period coincided with an unusually high error rate.

Two, the Russians sent Mifsud to plant the stolen email story with Pdop and then Brennan, Clapper and Comey were had and chased a false premise, wanting to believe the worst of Trump. Were they duped by the Russians into spying on Trump?

If it the first possibility people need to face charges and wind up in prison.

If it is the second possibility the CIA and FBI are in a world of hurt, not so much legally as in severely compromised from an intelligence security perspective. The Russians will have eaten their lunch.

Some questions that demand answers:

Who was Josef Mifsud working for?

On what basis did Strzok open a counter intelligence investigation?

How did the FBI learn about the emails?

Why didn’t Mueller charge Mifsud with lying to the FBI?

If the counter intelligence investigation was opened on Papadopoulos, why was the FISA app on Page?

Find Mifsud and this all ends. With a bang.