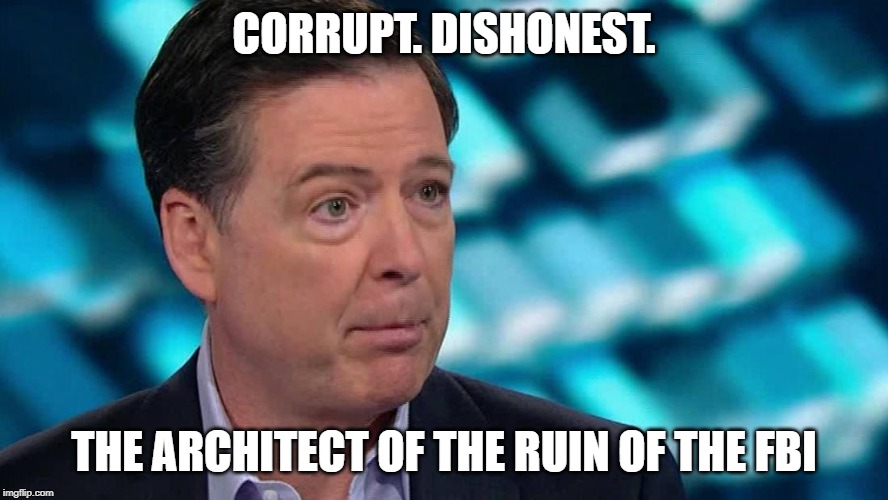 History will not be kind to James Comey. He will be characterized as the architect who destroyed the integrity of the FBI. Comey has a powerful tendency not to see things as they are in the eyes of the law, but through the prism of his own biased eyes.

Comey exonerated Hillary Clinton long before she was even interviewed by the FBI.

Comey leaks, but when he does it he does not believe it is a leak.

To this day Comey says he doesn’t know who paid for the Russian dossier.

When a Chinese spy was found working for Dianne Feinstein she was given notice and she fired him. Comey never gave Donald Trump a heads-up about attempts by the Russians to corrupt the election.

Comey did not tell Trump that it was Hillary Clinton and the DNC who paid for the dossier. He said “it wasn’t necessary for my goal.” Which was to frame Trump, of course.

Three times Comey told Trump he was not under investigation but refused to say it publicly.

The memos Comey sent to his friend (in hopes of getting a special counsel appointed) contained far more sensitive info than previously known.

Former FBI Director James Comey included a slew of sensitive and classified information in a series of comprehensive personal memos — including not only the details of his conversations with President Trump, but also the “code name and true identity” of a confidential source, according to a court-ordered filing by the Justice Department late Monday.

The filing acknowledges that Comey maintained a far more detailed and lengthy private paper trail than was previously known, and that federal investigators apparently hoped to use Comey’s contemporaneous, secretive writings to test the truthfulness of Trump’s comments as part of a then-ongoing obstruction of justice inquiry.

Comey meticulously outlined “foreign intelligence information obtained from and through” the key human source, “information about whether the FBI initiated coverage through the Foreign Intelligence Surveillance Act (FISA) on a particular individual,” relevant “sources and methods” used in the FBI’s investigation, as well as “information concerning the President’s foreign policy decision making,” according to the DOJ.

All of that information is “currently and properly classified,” the DOJ noted.

Comey signed off on a FISA application on Carter Page when he knew there was nothing to the accusations. Page had helped the FBI in the past and has been charged with absolutely nothing. Carter Page left the Trump campaign in late September of 2016 but the spying continued. Why?

All of Comey’ statements are self-serving and the latest proclamation is a beauty.

Comey, addressing a cybersecurity conference in California, drew a distinction between “spying” and the authorized surveillance that was conducted on the Trump campaign.

“I have no idea what he’s talking about so it’s hard for me to comment,” Comey said. “When I hear that kind of language used, it’s concerning, because the FBI and the Department of Justice conduct court-ordered electronic surveillance. I have never thought of that as spying.”

There it is again.

“I never thought of that as spying.”

The truth doesn’t matter. All that matters is what Comey thinks it is. That’s how he justifies ll of his malfeasance.

Comey politicized the FBI, America’s premier law enforcement agency. It started on July 6, 2016, when he usurped the authority of Attorney General Loretta Lynch in violation of the Constitution, the law, and DOJ regulations. He destroyed Hillary’s campaign when he unethically and unprofessionally described her conduct with pejorative words as criminal and then illegally exonerated her of the crimes. President Obama should have fired him that day. But he did not. Why? Perhaps because he had knowledge of Hillary’s avoidance of any protected email channels – after all, he communicated with her on her private server using a pseudonym.

Comey is a poseur. He pretends to be Thomas Beckett but he is, in fact, the assassin, Henry II. He claims in his memos that he doesn’t do sneaky things, leak, or do other weaselly things. Yet in his Bret Baier interview, he pretended not to know what a leak is. The president performed a public service by firing him. He should have done it the day after the Inauguration.

Do read it all.

Comey is one cog in the machine that sought to at first prevent Trump from being elected and then to depose a properly elected President of the United States, all because they simply hated him. The word treason comes to mind.

He must be brought to justice. It might be a good time for Comey to leave the country for somewhere his talents are suitable and appreciated.