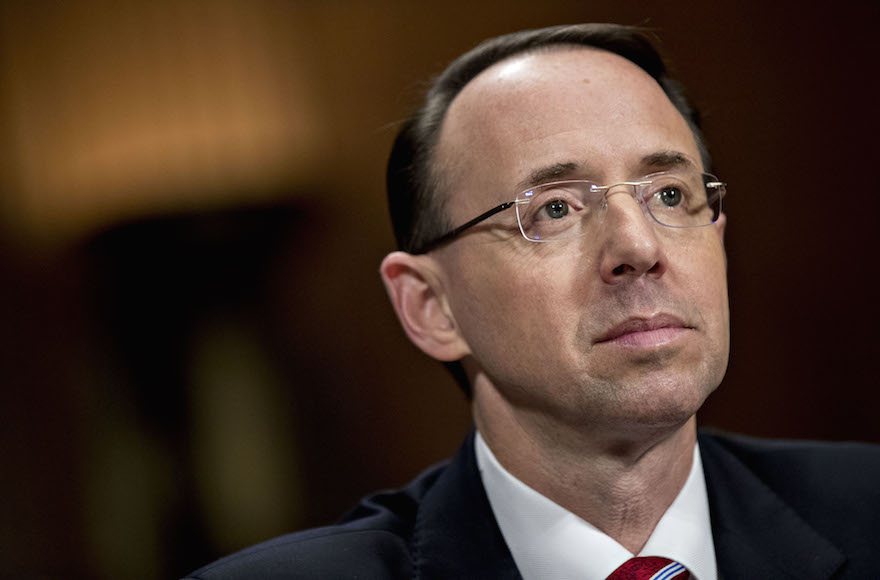 This is something that has been rolling around my head for a couple of years but it is making more and more sense.

“(Yates) has betrayed the Department of Justice,” the White House statement said.

Dana Boente, US attorney for the Eastern District of Virginia, was sworn in at 9 p.m. ET, per an administration official. A few hours later, Boente issued a statement rescinding Yates’ order, instructing DOJ lawyers to “defend the lawful orders of our President.”

Trump didn’t call Yates to dismiss her, she was informed by hand-delivered letter, according to a different administration official.

The Supreme Court would later uphold the order.

The next day Trump nominated Rod Rosenstein to be Deputy Attorney General of the United States and he was subsequently confirmed.

FBI Director James Comey met with Trump just before the phony dossier was published to “warn” Trump about it, but strangely left out some critical information- the fact that it was bought and paid for by Hillary Clinton and the Democrat National Committee.

Comey was fired by Trump on May 9, 2017 not to stop the Russia investigation as so commonly asserted, but instead because Comey was lying to Trump. Three times Comey told Trump privately that Trump was not under investigation but would not confirm it publicly. The letter terminating Comey was written by Rod Rosenstein.

Although the President has the power to remove an FBI director, the decision should not be taken lightly. I agree with the nearly unanimous opinions of former Department officials. The way the Director handled the conclusion of the email investigation was wrong. As a result, the FBI is unlikely to regain public and congressional trust until it has a Director who understands the gravity of the mistakes and pledges never to repeat them. Having refused to admit his errors, the Director cannot be expected to implement the necessary corrective actions.

On May 17, 2017 Rod Rosenstein appointed Robert Mueller as Special Counsel to investigate the claims of collusion and there is a clue contained within:

“In my capacity as acting Attorney General, I determined that it is in the public interest for me to exercise my authority and appoint a Special Counsel to assume responsibility for this matter,” said Deputy Attorney General Rosenstein. “My decision is not a finding that crimes have been committed or that any prosecution is warranted. I have made no such determination. What I have determined is that based upon the unique circumstances, the public interest requires me to place this investigation under the authority of a person who exercises a degree of independence from the normal chain of command.”

“…a person who exercises a degree of independence from the normal chain of command.”

The normal chain of command was hopelessly corrupt. Comey hated Trump and lied to him repeatedly. McCabe was bought and owned by Hillary Clinton.

Hillary Clinton and the Democrat National Committee commissioned Fusion GPS via Perkins Coie to fabricate the phony dossier with nonsense compiled by Christopher Steele. The dossier was then fed to the FBI and who then failed to even question its veracity. The dossier was the basis for obtaining a FISA warrant on Carter Page and this allowed them to collect the communications of anyone in the Trump sphere.

Then Obama changed the rules to allow NSA intercepts to fall into convenient political hands under the ruse of national security:

To intelligence professionals, the public revelations affirm an undeniable reality.

Over the last decade, the assumption of civil liberty and privacy protections for Americans incidentally intercepted by the NSA overseas has been eroded in the name of national security.

Today, the power to unmask an American’s name inside an NSA intercept — once considered a rare event in the intelligence and civil liberty communities — now resides with about 20 different officials inside the NSA alone. The FBI also has the ability to unmask Americans’ names to other intelligence professionals and policymakers.

They assured us that there was nothing to worry about:

A U.S. intelligence official directly familiar with the procedures told Circa that while the unmasking requirements have been eased and the availability of intercepts widened, the NSA still regards protecting Americans’ privacy as essential.

“When [the NSA] uses their authority to unmask them we have very stringent rules,” the official said, speaking only on condition of anonymity due to secret nature of the NSA’s work. “We have very strict oversight from all three branches of government — the executive, judicial and legislative.

“We obviously are concerned that the authorities that are granted are not abused, and that’s why we have a strict compliance regimen.”

But there was. In my opinion this occurred at a moment that was not coincidental.

National Security Agency Director Admiral Mike Rogers had been looking into abuse of intelligence for some time. This is from a remarkable piece of work by Jeff Carlson:

What this suggests is that the Obama administration was actively spying on Donald Trump. And catch this:

The DOJ & FBI appear to have rushed the Carter Page FISA application – knowing Rogers was preparing to go before the FISA Court.

The DOJ & FBI apply for – and receive – a Title I FISA warrant on Carter Page the same day Rogers apprises both Agencies of ongoing FISA violations.

Neither the DOJ or FBI inform the FISA Court of Rogers’ notification when they make their FISA Application on Page.

With the convenient channels blocked, DNI James Clapper signed the new rules into effect on December 15, 2016.

Samantha Power (on a daily basis) and Susan Rice went crazy unmasking Americans and their private conversations, conveniently including members of Trump’s team. Within hours of leaving office, Rice then wrote a memo pretty much admitting they had abused their offices.

Rice sent herself the email 15 minutes after President Trump formally took office on Jan. 20, 2017. In it, Rice purports to summarize a high-level meeting she attended about two weeks earlier on Jan. 5, 2017. Also in attendance, she says, were President Obama, Deputy Attorney General Sally Yates, FBI Director James Comey and Vice President Joe Biden. The meeting, writes Rice, was held after a briefing by intelligence community leadership on “Russia hacking during the 2016 Presidential election.” According to news reports, the meeting also addressed the anti-Trump “dossier” political opposition research paid for by the Clinton campaign and Democratic Party. We now know the FBI used the dossier, in part, to justify wiretapping a former Trump adviser.

Loretta Lynch had blocked any possible prosecution of Hillary Clinton.

On January 6, 2017 Comey met with Trump to basically warn Trump that Comey had the goods on Trump. Subsequently Comey would then lie to Trump three times about Trump being the target of the investigation. Democrats were beating Trump over the head with the phony dossier and the left wing media and the corrupt members of the Intelligence community (Brennnan and Clapper) were screaming collusion and treason. Finally, Trump and Rosenstein fired Comey but that put Clinton asset Andrew McCabe in charge of the FBI. The conspiracy to overthrow Trump was in full swing.

At this point I do think it’s very possible that Rosenstein recognized the democrat-led conspiracy and had enough.  He realized that there was no chance Trump was going to receive fair treatment because of the wide spread corruption. He then appointed Robert Mueller- to take the Russian accusations out of the hands of the FBI and the corrupt Obama Intelligence Community. The last honest man at the top of the IC was Admiral Mike Rogers. Rosenstein released the letter describing the Mueller appointment, but in August Rosenstein gave Mueller an additional directive allegedly to specifically investigate Paul Manafort.

Mueller then packed his team with the most virulent and rabid anti-Trump people possible. This turned out to be fortuitous. The worst possible jury found no evidence of collusion or conspiracy, a conclusion from which democrats have yet to recover.

It is true that Rosenstein signed off on at least one of the FISA applications but I believe he, as was the FISA Court, misled and lied to and later came to realize that.

In March of 2018, on the recommendation of the DOJ Inspector General  and the FBI Office of Professional Responsibility, Andrew McCabe was terminated from the FBI. McCabe would later strike back at Rosenstein. It makes me think Rosenstein had Trump’s back when McCabe’s last gasp effort to undermine Rosenstein was McCabe’s assertion that Rosenstein offered to wear a wire to record Trump as a means of invoking the 25th Amendment. Rosenstein quickly denied it.

Trump met with Rosenstein subsequent to the accusations, but Rosenstein remains on the job. It does appear to me that Rosenstein was protecting Trump from an unlawful conspiracy that began at the top of the obama administration.

Devin Nunes has sent 8 criminal referrals to the DOJ and Mark Meadows says more are coming. I look forward to it.