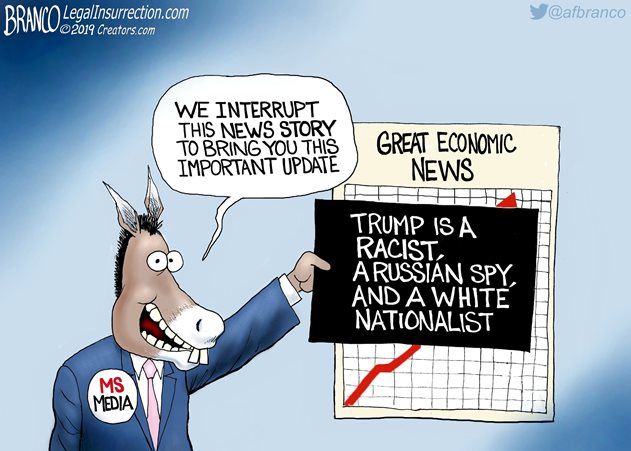 Welcome back, and this was a banner week for Leftist insanity! How crazy was this week? There were enough stories that I didn’t even bother with the two biggest stories in Mueller and Smollett. But for Flopping Aces commenter Another Vet, I promise when you get to the tweet roundup it will be Mueller Time! And if you want to watch my two favorite videos on the subject, check out Steven Crowder’s always great rundown, or the awesomely profane Razorfist.  If nothing else, jump to the 1:43 where he succinctly sums up how we feel toward every Leftist who’s been shrieking these tinfoil hat conspiracy theories for the last two years. Just don’t play it in front of the kids.

Time to return to heating your homes with wood, dung, or whale oil. Because science.

Includes a video, showing one of the west coast cities that The Radical Left is destroying

Weren’t eight years of that enough? To paraphrase HL Mencken, we voted for it and got it good and hard.

3/25 – The sick dehumanization of Trump supporters

We do need to start having a conversation about left wing bigots.

If you click on one link this week, please make it this one. The post talks about the browser extension Dissenter that allows the people to circumvent web sites that are afraid of commenters

Sargon of Akkad gives his usual crushing analysis of Leftism, with the best take on Mike Lee’s presentation on the floor – “I see we have a S*** Lord in the Senate!” (censorship mine, as always, he drops some NSFW language). The funny thing is I thought those shots of Mike Lee were brilliant PhotoShops when I first saw them – nope, just Republicans being smart for a change!

I know, I said I’d avoid Mueller here, but TuCa’s takedown of CNN uses the most nasty, brutal, and effective means you can against The Radical Left – their own words

3/29 – An Awkward Kiss Changed How I Saw Joe Biden

Before anyone in the peanut gallery chimes in, no not ME, the author of the post! Hot damn, 2019 is the best year ever! (censorship mine):

I felt him get closer to me from behind. He leaned further in and inhaled my hair. I was mortified. I thought to myself, “I didn’t wash my hair today and the vice-president of the United States is smelling it. And also, what in the actual fuck? Why is the vice-president of the United States smelling my hair?” He proceeded to plant a big slow kiss on the back of my head. My brain couldn’t process what was happening. I was embarrassed. I was shocked. I was confused.

There is a Spanish saying, “tragame tierra,” it means, “earth, swallow me whole.” I couldn’t move and I couldn’t say anything. I wanted nothing more than to get Biden away from me.

ICYMI – I weighed in on the Mueller aftermath, or more accurately, Democrats’ reactions in  The Week that We Learned that Democrats Are Horrible People Who Hate America

From the archives, we continue with offshoots from my Economics for Politicians series, How to Fix the Spiraling Costs of College Education. It’s a bit long, but going back I was pleasantly surprised to find it was one of the better pieces (in terms of offering practical, realistic solutions) I’ve written. If you’ve got a few please check it out!

Democrats would be less concerned with obstruction of justice had Trump taken hammers to some hard drives.

At this point, you almost have to admire the shamelessnesshttps://t.co/jqyB52FhOz

The best part of John Brennan’s interview on MSNBC today?

It suggests he’s hunkered down at a local Motel 6, sleeping on a bed that vibrates when you feed it quarters, planning his escape to Cuba.

It’s perfect. Former colleagues like me couldn’t be happier. pic.twitter.com/UCORdKSBoz

Obama’s FBI used a bogus file of fiction bought by Hillary’s campaign to mislead a judge so it could spy on the nominee for the other party and then pressure a probe after GOP victory, but this isn’t a scandal about the corruption of Democrats or DOJ because shut up bot.

You filled your life up with Rachel Maddow, and now all your dreams are dead. No one will ever love you.#caring