Islamic violence against Christians dwarfs the reverse, but Muslim lives matter. Christian lives do not. 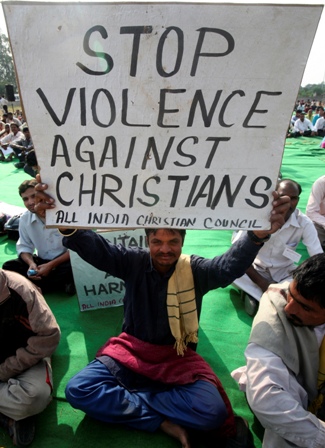 As we noted, following the Mosque attack in New Zealand virtually every democrat used it to blame Donald Trump and pretty much anyone on the right who looks like him. There was a conflation of white supremacists, white nationalists and white men. This attack got an immense amount of coverage in the press. What doesn’t get the same attention are the constant attacks on Christians worldwide.

In January a church in the Philippines was bombed by Muslims, killing 20 Catholics.

JOLO, Philippines — Two bombs minutes apart tore through a Roman Catholic cathedral on a southern Philippine island where Muslim militants are active, killing at least 20 people and wounding 111 others during a Sunday Mass, officials said.

Witnesses said the first blast inside the Jolo cathedral in the provincial capital sent churchgoers, some of them wounded, to stampede out of the main door. Army troops and police posted outside were rushing in when the second bomb went off about one minute later near the main entrance, causing more deaths and injuries. The military was checking a report that the second explosive device may have been attached to a parked motorcycle.

120 Christians have been killed in Nigeria over the the last three weeks:

The recent death toll of Christians in Nigeria has reached 120 with this week’s slaughter of more than 50 by Fulani Muslim militants in the Kaduna state of Nigeria, the Christian Postreported.

The assailants reportedly split into three groups, the first of which fired upon the people, the second set fire to buildings, and the third chased down people fleeing from the scene. Victims of the assault included women and children.

“We were all asleep in our various homes when at about 4 a.m. [Saturday], we heard gunshots everywhere in my village,” Amos Samuel, 40, of Nandu Gbok village in Sanga County told Morning Star News. “Everyone ran out of their homes to escape from the Fulani herdsmen. Three hours after the herdsmen left, those of us who survived the attack returned to the village to find that our houses were destroyed and 10 of our villagers killed.”

Over at ROP there is more. During the last 30 days:

During this time period, there were 117 Islamic attacks in 22 countries, in which 797 people were killed and 790 injured.

90,000 Christians worldwide were killed in 2016 for the crime of being Christian.

Christians continued to be the most persecuted group across the globe in 2016, according to a study.

The upcoming report from Italian-based Center for Studies on New Religions, determined that 90,000 Christians were killed for their beliefs worldwide last year and nearly a third were at the hands of Islamic extremists like ISIS. Others were killed by state and non-state persecution, including in places like North Korea.

Let that sink in for a moment. How many deaths have you heard about? The very few you know about are characterized in a very different manner. Remember the Pulse shooting? 49 killed by a Muslim gunman in a gay nightclub. Islam has a homophobia problem, but that was completely glossed over.

The LGBTQ community has been attacked by a man whose civil rights and whose faith would have been fiercely protected by liberals. Pressing questions need to be asked. The most important of these is whether Islamic culture, or Middle Eastern and Central-South Asian social mores—the major assumptions upon which Mateen based his life—were themselves discriminatory and hateful towards gays. It is time to ask whether such attitudes were the mental fingers on the trigger long before the dreadful morning of June 12, 2016.

Had the killer been a Christian….well, you know how that would have gone.

Remember the San Bernardino shooting? 14 people were killed by a Muslim couple. No one talks about it now. No one brings it up.

Here’s another list of Islamic attacks in the US.

Little Rock, Arkansas, June 1, 2009. Abdulhakim Mujahid Muhammad shot and murdered one soldier, Army Pvt. William Andrew Long, and injured another, Pvt. Quinton Ezeagwula, at a military recruiting station in Little Rock. Muhammad reportedly converted to Islam in college and was on the FBI’s radar after being arrested in Yemen–a hotbed of radical Islamic terrorism–for using a Somali passport, even though he was a U.S. citizen. In a note to an Arkansas judge, Muhammad claimedto be a member of al-Qaeda in the Arab Peninsula, the terror group’s Yemen chapter.

Fort Hood, Texas, November 5, 2009. Major Nidal Malik Hasan shot up a military base in Fort Hood and murdered 14 people. Hasan was in contact with al-Qaeda terrorist Anwar al-Awlaki prior to the attack and shouted “Allahu Akbar!” as he fired upon the soldiers on the Fort Hood base. After being sentenced to death, Hasan requested to join ISIS while on death row. It took six years for Obama to acknowledge the shooting as a terror attack instead of “workplace violence.”

Moore, Oklahoma, September 24, 2014. Alton Nolen beheaded a woman, Colleen Huff, at a Vaughan Foods plant and stabbed and injured another person. While Nolen’s motives are unclear, he appears to have been another radicalized Muslim who was obsessed with beheadings.

Queens, New York, October 23, 2014. Zale Thompson, another self-radicalized Muslim, injured two police officers with a hatchet before being shot dead by other cops. Thompson reportedly indoctrinated himself with ISIS, al-Qaeda and al-Shabab–a Somali jihadist terror group–websites and was a lone wolf attacker.

Garland, Texas, May 3, 2015. Two gunmen shot up the Curtis Culwell Center in Garland, where a Mohammed cartoon contest was taking place, and were killed by a police officer. ISIS claimed responsibility for the attack.

Chattanooga, Tennessee, July 16, 2015. Muhammad Youssef Abdulazeez shot and killed four Marines and a sailor at a military base in Chattanooga and was believed to have been inspired by ISIS.

The media handling in all these attacks was far different from attacks on Muslims. No one blamed a group of Muslims. No one blamed Islam. Every attack was characterized as “lone wolf” or a case of mental illness. The color of the persons involved was not an issue nor was it ever spoken of. There was no “Islamic Supremacy” talk. The media did not allow blame to be pinned on Obama despite his criticism of those bitter gun and Bible clingers. Should Obama share some of the blame for these attacks because of being “saddened” by white privilege? Did Obama stoke racial tensions by calling his grandmother a “typical white person”?

I don’t think so. But then, blaming Trump for any of this is stupid, ignorant and partisan. They words are being spit out of hatred and bitterness, not truth.

In this story, American Muslims are “alarmed at White Supremacist terror attacks in New Zealand”

The seven-million strong American Muslim Community was alarmed at the White Supremacist terror attacks on two mosques in New Zealand where gunmen entered the mosques and began to shoot and kill Muslim parishioners indiscriminately during the Friday prayer services. At least 49 Muslims were killed and another 48 injured. New Zealand Australian Prime Minister Scott Morrison confirmed children among shooting victims.

Fair enough, but 90,000 Christians were killed in 2016 for being Christian, most at the hands of Muslims That’s pretty alarming too.

There’s the real story. It’s a shame that Christian lives do not matter as much as Muslim lives.

UTRECHT, Netherlands, March 18 (Reuters) – A gunman shot dead three people and wounded nine on a tram in the Dutch city of Utrecht on Monday and police said they were hunting for a 37-year-old Turkish man in an apparent terrorist attack.

Dutch authorities raised the terrorism threat to its highest level in Utrecht province, schools were told to shut their doors and paramilitary police increased security at airports and other vital infrastructure and also at mosques.

Prime Minister Mark Rutte convened crisis talks, saying he was deeply concerned about the incident, which came three days after a lone gunman killed 50 people in mass shootings at two mosques in the city of Christchurch, New Zealand.

“The police asks you to watch out for 37-year-old Gokmen Tanis (born in Turkey) in connection with this morning’s incident,” Dutch police said in a statement.

By the end of the day, this too will be Trump’s fault.