A cancer in the House of Representatives- Updated 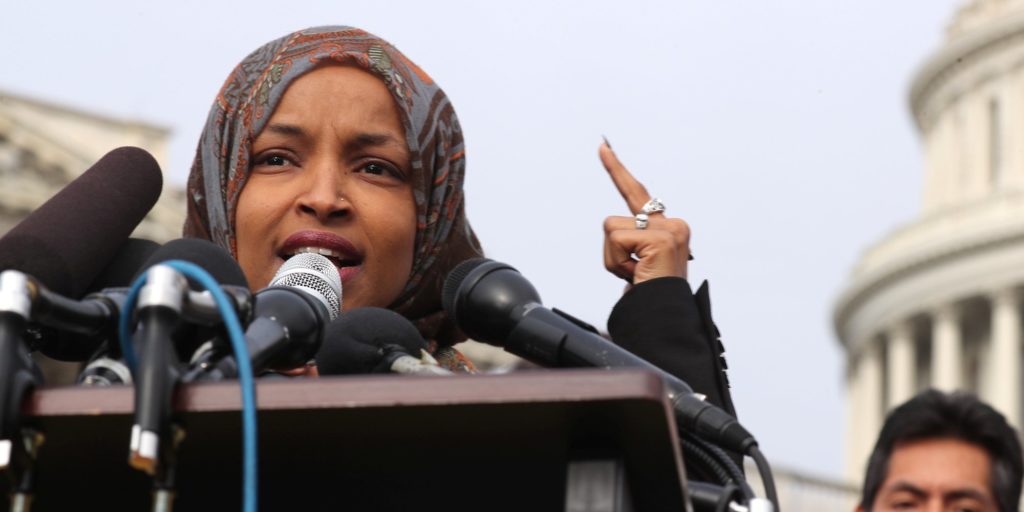 There is a cancer in the House of Representatives and democrats have their hands full attempting to control it. I warned about this. Ilhan Omar reportedly married her brother and has an interesting history.

She lied about her support for Israel. Of late she has been throwing her newfound stature around and is punching way above her weight class. In apparent support for Nicolas Maduro, she accused Donald Trump of a “coup attempt” in Venezuela.

“A US backed coup in Venezuela is not a solution to the dire issues they face,” Omar tweeted. “Trump’s efforts to install a far right opposition will only incite violence and further destabilize the region. We Must support Mexico, Uruguay, & the Vatican’s efforts to facilitate a peaceful dialogue.”

Omar appears to be an ISIS supporter as well:

Rep. Ilhan Omar (D-Minn.) calledfor a more lenient sentence for nine Somalian men in Minnesota who were convicted of attempting to join ISIS in November 2016.

Omar, then a Minnesota assemblymember-elect, wrote in a letter to the judge presiding the case, Michael Davis, about “the ramifications of sentencing young men who made a consequential mistake to decades in federal prison.”

“Incarcerating 20-year-old men for 30 or 40 years is essentially a life sentence. Society will have no expectations of the to be 50 or 60-year-old released prisoners; it will view them with distrust and revulsion,” Omar wrote. “Such punitive measures not only lack efficacy, they inevitably create an environment in which extremism can flourish, aligning with the presupposition of terrorist recruitment: ‘Americans do not accept you and continue to trivialize your value. Instead of being a nobody, be a martyr.’”

Omar advocated for “a system of compassion” as a response to “fanaticism.”

Right. Compassion for Islamists who murder indiscriminately. Charlie Manson would have loved her.

Along with her anti-American colleagues Rashida Tlaib and Alexandria Ocasio-Cortez she would dismantle this country and destroy everything that made it great, like borders and national security:

When Democrats stood our ground last month, we proved that Individual 1 does not have the public support to ram his hateful wall through Congress.

Not one dollar for DHS. Not one. In addition to being ignorant enough to conflate legal and illegal immigration, she wants border control abolished:

“[Immigrants are] coming to our border asking for their human rights to be recognized to seek asylum,” said Omar, a Muslim immigrant from Somalia who won her House seat in November 2018. “And we are welcoming them to torture, detention, separation and more pain or heartache. So today, and every day until this nightmare ends, this stain of our country’s history ends, we say ‘not under our watch.’”

Prematurely and fabulously wrongly, she seized on the Covington Catholic kids:

Did I mention that she’s an anti-Semite?

This time, she found herself being called out by one of her own Democratic colleagues, Jewish organizations and even Chelsea Clinton for tweets claiming Republican support for Israel is bought and paid for by AIPAC.

Omar linked to a tweet by left-wing journalist Glenn Greenwald, who was criticizing House Minority Leader Kevin McCarthy (R., Calif.) for threatening punishment against Omar and fellow anti-Israel Rep. Rashida Tlaib (D., Mich.). She wrote, “It’s all about the Benjamins baby” with musical notes, a reference to $100 bills with Benjamin Franklin’s face on them.

Her anti-Semitism has gotten so bad that the left has taken notice and she drew this response:

She is also a homophobe:

Rep. Omar on her homophobic innuendo that Graham is being blackmailed:

Omar: He is somehow compromised

CNN: Based on what evidence?

Omar: The evidence present to us

Omar: An opinion based on what I believe to be visible to me. Americans agree on this pic.twitter.com/wLL8dZUlkH

And her math leaves much to be desired:

She blames the US for al-Shabab terrorism in Kenya:

Minnesota Democratic Rep. Ilhan Omar once described acts of terrorism as a reaction to “our involvement in other people’s affairs,” in the wake of the brutal al-Shabab attack on a Kenyan shopping mall in 2013.

Omar made the comments during an obscure local television appearance just weeks after four armed al-Shabab jihadists stormed the Westgate mall in Nairobi in 2013, killing nearly 70 people and wounding 200.

Omar was born in Somalia. You know Somalia, right?

Somalia one of world’s great danger zones for Christians

For Catholics, however, “there is no possible way of having a presence in Mogadishu, since it is very dangerous.”

If You Become a Christian in Somalia, You Probably Won’t Live for Long

The World Watch List, Open Doors’ annual report on persecuted Christians, is an indexed ranking of the toughest places on earth to be a believer. In the just-released 2017 list, Somalia is ranked at number 2, making it the second worst place in the world to follow Jesus—following close behind North Korea.

What has this Somali enclave done for Minneapolis? Lots.

This is how bad Omar is getting:

As an American Muslim, I plead that this is only a good first step to be followed by a swift sanction against @IlhanMN for bigotry unfit for the US Congress with removal from all committees. Ignoring this would bring the "bigotry of low expectations" to a new low for Muslims. https://t.co/szawtKBQlV

Even Jerry Nadler has had enough. OK, not everyone is bothered:

David Duke is defending Omar, so she’s got that going for her too.

She has issued a (sort of) apology for insulting those money-grubbing Jews:

Pelosi pressed Omar for that apology but there really is no point. She is who she is and she made that more than abundantly clear.

She is a cancer in the House.

Omar will be speaking alongside a well-known Islamic Relief USA official, Yousef Abdallah, who has openly advocated for violence against Jews and has shared antisemitic sentiments on social media.

She’s probably too stupid to practice taqyya (the art of lying to promote the spread of Islam.)
So, what she is doing is being open and honest about Muslim beliefs.
They hate (and many support the deaths of ) Jews.
They want Israel wiped off the map.
They call Muslims who would celebrate Christmas “apostates,” who are thus worthy of death.
They support ISIS and lenient punishment for Muslim fighters (jihadis).
They hate homosexuals, some even kill homosexuals.

So, all this is going on all over the 53 Islamic (Sharia) states.
She reflects these truths.
Will the blinders ever come off the eyes of Lefties/Dems?

Boy, them Democrats. Can they pick em or what?

I wonder how Pelosi likes the response to her demand for an apology of “eat me”? She “apologizes” then doubles down on her original insult.

How did she ever get elected? It’s time to take our country back.

Make no mistake, her views, like AOC’s, reflect the overall views of the dems.

@another vet: At the very least, they don’t have the guts to denounce the anti-Semitism and hate for fear of losing votes.

How much more stupidity can be brought into our government by people like her and some more others. Hate to see America going down the drain. Being an immigrant myself, I am forever grateful for letting my family to come here.

@Levsha: The US loves and welcomes immigrants who come in legally and contribute to our overall combined good. It is a shame some of our own indigenous people want such harm to come to the country.

Her and other like her can GTFO !! She is not stupid the devil guides her !!!

she is a muslin, she and her religion call for the complete eradication of all Jew. islam is Hiter’s Final Solution which began in the 5th century. she is hell-bent on destroying America. jihadis in the US Congress.

Did you see Ilhan Omar’s recent dog and pony show during a Congressional hearing where she attacked the U.S. Special Envoy to Venezuea, Elliot Abrams? She verbally attacked him on a personal level. Abrams is Jewish. Anyone wonder what her reasoning behind the attack was?

DrJohn, good one. This screams “get the border under control”. . . . and soon, before things can no longer be reversed and before the insanity completely invades and radically changes the greatest Nation.

If Obama could run again, she’d be the perfect VP. The media would fall over each other in their praise of her.

She is truly despicable.

This is a dangerous and arrogant woman. A true enemy of the United States. She needs to be stopped before she does any real damage to our country. How did she get elected?

@retire05: not only did I see it but watching how much she enjoyed attacking him by smiling throughout the little speech she prepared made me sick to my stomach