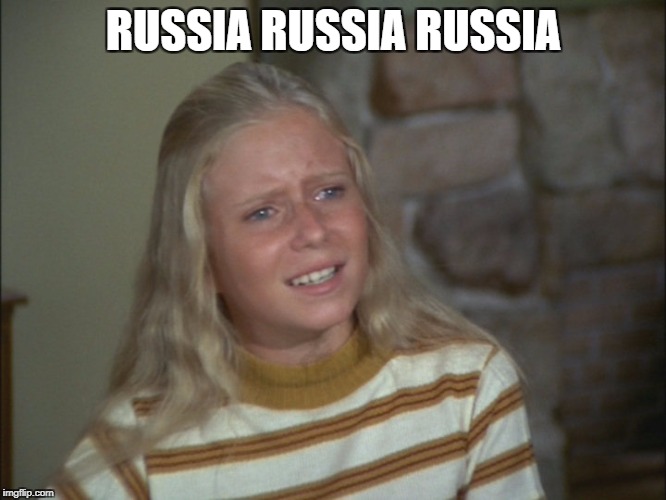 Bill and Hillary Clinton were and are up to their eyeballs in Russian collusion. All of the roads to the Trump dossier lead directly to them:

Christopher Steele: Paid by the Clinton campaign and the DNC and who paid Kremlin operatives for the dirt on Trump

(Steele shopped the dossier to numerous journalists in the summer of 2016 after calling his buddies in the Kremlin for dirt on Trump. He ever went to Russia for the information)

Michael Isikoff: Wrote the Yahoo article based on the information fed to him be Steele.

Sid Blumenthal: Fed information to Christopher Steele via the Bruce Ohr at the obama State Department.

It is also very curious that Downer just happened to sit next to Papadopoulos at the very same London bar and strike up a conversation about Hillary’s emails. What are the odds?

All of the information in the dossier ties directly to the Clinton’s. The circle closes. One has to wonder- were the Russians even involved at all?

You will remember that in 2010 while his wife was Secretary of State Bill Clinton took a $500,000 bribe, er, I mean honorarium from a Russian bank the day after he visited Vladimir Putin in Putin’s home and that soon after $145 million flowed into the Clinton Foundation while 20% control of US uranium went into the hands of Putin.

The FBI had equal concern about Rosatom’s acquisition of Uranium One. An informer named William Douglas Campbell had gotten inside the Russian nuclear giant in 2009 and gathered evidence that Rosatom’s agents in the United States were engaged in a racketeering scheme involving kickbacks, extortion and bribery.

Campbell also obtained written evidence that Putin wanted to buy Uranium One as part of a strategy to obtain monopolistic domination of the global uranium markets, including leverage over the U.S.

Campbell also warned a major in-kind donor to the Clinton Global Initiative was simultaneously working for Rosatom while the decision for U.S. approval was pending before Hillary Clinton’s department. Ultimately, her department and the Obama administration approved the transaction.

The evidence shows the Clintons financially benefited from Russia — personally and inside their charity — at the same time they were involved in U.S. government actions that rewarded Moscow and increased U.S. security risks.

The intersections between the Clintons, the Democrats and Russia carried into 2016, when a major political opposition research project designed to portray GOP rival Donald Trump as compromised by Moscow was launched by Clinton’s presidential campaign and brought to the FBI.

Simpson then hired retired British intelligence operative Christopher Steele — whom the FBI learned was “desperate” to defeat Trump — to write an unverified dossier suggesting that Trump’s campaign was colluding with Russia to hijack the election.

Simpson, Steele and Perkins Coie all walked Trump-Russia related allegations into the FBI the summer before the election, prompting agents who openly disliked Trump to launch a counterintelligence probe of the GOP nominee shortly before Election Day.

The Clinton’s kept “flooding” the FBI with propaganda until the FBI finally bit on it:

When at first you don’t succeed, try, try again. That’s what Hillary Clinton’s machine did in 2016, eventually getting the FBI to bite on an uncorroborated narrative that Donald Trump and Russia were trying to hijack the presidential election.

Between July and October 2016, Clinton-connected lawyers, emissaries and apologists made more than a half-dozen overtures to U.S. officials, each tapping a political connection to get suspect evidence into FBI counterintelligence agents’ hands, according to internal documents and testimonies I reviewed and interviews I conducted.

In each situation, the overture was uninvited. And as the election drew closer, the point of contact moved higher up the FBI chain.

It was, as one of my own FBI sources called it, a “classic case of information saturation” designed to inject political opposition research into a counterintelligence machinery that should have suspected a political dirty trick was underway.

Christoper Steele and Glenn Simpson, under contract to the Clinton campaign and the DNC, shopped the dossier around:

Simpson and Steele began briefing reporters with the hope of getting the word out. It is taboo for an FBI source such as Steele to talk to the media about his work. Yet, he took the risk, eventually getting fired for it, according to FBI documents.

Baker, the FBI’s top lawyer, testified to Congress that he was clearly aware Simpson’s team was shopping the media. “My understanding at the time was that Simpson was going around Washington giving this out to a lot of different people and trying to elevate its profile,” Baker told congressional investigators.

Ohr, through his contacts with Steele and Simpson, also knew the media had been contacted. In handwritten notes from late 2016, Ohr quoted Simpson as saying his outreach to reporters was a “Hail Mary attempt” to sway voters.

Simpson has become a Gump-like character who keeps showing up in so many different places in the Russia scandal: He’s the owner of the company that was paid by Clinton for the Steele dossier, the guy who hired Steele to create the dossier, the one who met with Ohr at the Justice Department, who pitched reporters writing Trump dirt at the end of the campaign and who met with the Russian woman and an American lobbyist at the heart of the infamous June 2016 Trump Tower meeting.

And then, he shows up with Schiff in Aspen.

“It’s interesting that Simpson is at the heart of the dossier and the dossier played a mighty role in not only going after Carter Page but in much of Adam’s and Eric Swalwell’s [D-Calif.] quest to find collusion, that [Schiff] would in fact in that exact same conversation, or time frame, be in conversation or appear to be in conversation with the guy who’s principally responsible for the dossier,” Conaway said.

And you read that here almost two years ago. I also stated that had there been any evidence of collusion, obama would have leaked it long ago.

So here’s the continuing plan:

Schiff has nothing. Mueller has nothing (which we know now because of the next sentence). Despite that, Adam Schiff promises new and expanded investigations into Trump and Trump’s finances. Schiff’s motivations are patently clear. He will do everything he can to cripple Trump’s Presidency and re-election campaign via smear and innuendo. There is simply no way Schiff has access to more and better resources than Mueller has had. Mueller has employed the most vicious and rabid anti-Trump partisans on the face of the Earth, including some who plainly unscrupulous. If Mueller couldn’t find anything, there is nothing to find. As mentioned previously, both the House and the Senate committees concluded that there was no evidence of collusion- on the part of Trump.

Schiff knows that. Now he needs to lead Congress away from the truth.

There is a considerable amount of evidence that Hillary Clinton and the DNC colluded with Russians to frame Trump.