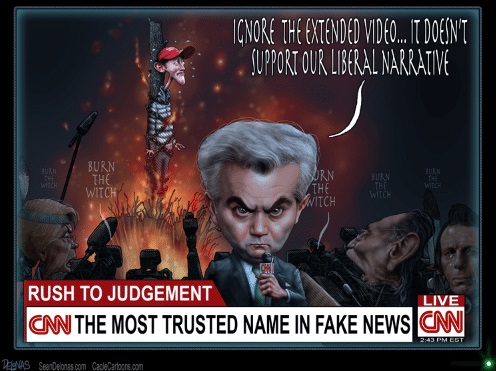 Now that he smoke has cleared and the facts are in, let’s take a look at the insanity that took place two weekends ago here in The Swamp. With so many electrons that have already been spilled on this story, there’s no need to recap events. Let’s look back on the worst of the worst of what we witnessed. In no particular order:

Really no explanation needed. I first learned of this via a high school buddy’s Facebook feed. Even though I’ve pretty much left Facebook I still have to at least glance at it each day since our neighborhood and Little Bob’s school use it to post news. The post on this was one of the knee-jerk immediate damnation pieces. And this particular guy is someone who I’m pretty sure has never posted anything partisan political in however many years we’ve been connected on FB. Even worse, some other guys who I know to be Conservatives (or very nonpolitical) joined the pile-on the in the comments. Soon after in Twitter I found the truth of it and posted such. One of the Nonpoliticals thanked me, while some woman I didn’t know proclaimed that she teaches her boys to never read such unreliable sites and concluded with “White boys gonna white boy” I half debated responding the next day before exiting the conversation, but the next day the initial post had been taken down.

Even when I was active on FB, I would almost never tag people or post on their walls, but I made an exception for The Babylon Bee’s take on it by dropping the post on his wall. He responded by citing two other offenses that the boys and their families committed, but I decided it was time to remember why I decided to leave FB in the first place. Since I never heard anything else about his other two allegations I’m assuming that they were false as well. What killed me about this was seeing people fall for this who weren’t Jezebel contributors, Hollywood producers, or even my typical frothing at the mouth Leftist friends. These are people who I know are good folks who fell for this hook, line, and sinker. Thankfully the evidence was here to exonerate those kids, but what if hadn’t been?

Dr. John broke down how Nathan Phillips is a Fraud and a Liar. How did it never even enter the thought process of the propagandists from the profession formerly known as Journalism not think that they would get fact checked on every detail of this story? Even worse, Phillips is a professional agitator who’s been in the public eye for some time now. And never once did they bother to look into his background?

Remember those good old days when “For the children!” was one of The Left’s mantras? We’ve seen doxxing, threats against Covington High School, demands to destroy their lives, all from the side that claims to stand for compassion. Then again, if Virginia Governor Northam had been there for those students, I’m sure that he would have ensured that “The students would be kept comfortable. The students would be resuscitated if that’s what the mother and the family desired. And then a discussion would ensue between the physicians and the mother.”

Apparently death threats against minors is acceptable, while telling recently laid off “journalists” to Learn to Code is ban-worthy hate speech.

This may need to be a separate post of its own, but is the notion of wearing a hat proclaiming that you want the country of which we’re all citizens to be great actually offensive? Being a DC resident, I recall early 2009 when you couldn’t swing a dead cat without hitting some smiling groupie proudly wearing gear celebrating a man who literally promised to try to destroy this country. And yet why did I never felt the slightest bit threatened, nor feel the urge to assault one of these happy little aspiring Fascists? Oh, that’s right. I’m a friggin’ adult.

6. Just because you are obviously and undeniably wrong is no reason to stop lying.

While they were far from the only outlet, The Washington Post wasn’t about to let a triviality like getting caught in a lie stop their assaults on Covington, and Catholicism in general.

Enter Sandmann, and God bless him for maintaining his cool as that harpy tried to corner him into confessing to some imaginary sins. For the second time in several days, he stood his ground against an adult trying to bully him. I would have liked to see Sandmann go on the offensive and throw Guthrie’s hypocrisy back in her face, but for a 16 year old kid he handled himself well. The kid’s got a future.

Speaking of the Guthrie interview, did anyone else notice the actual, very real racism that occurred that day? The MSM certainly did a great job of ignoring it! Most of you know about the Black Hebrew Isrealites and their hateful slurs, fully endorsed by a new member of the US Congress, of course. But did you catch one of Chief Sitting Bull’s lynch mob telling the students “You white people go back to Europe, this is not your land”. I’m actually old enough to remember the days when a person wearing a red hat telling a member of another race that they don’t belong in America and should leave was considered racist.

We expect this kind of idiocy from The Radical Left, but I remember the days when Conservatives would take the side of Conservatives in a fight. There were a series of deleted tweets and half apologies from National Review, Cruise Director Bill Kristol, and various other Vichy Conservatives. The most disturbing part of their reaction is that they reacted so quickly because they wanted it to be true. They have so much contempt for the base that they claim to represent that they couldn’t race quickly enough to condemn the kids. With friends like these who needs enemas?

10. Kurt Schlichter’s Kelly Turnbull books are supposed to be fiction, not a damned how to guide!

These books are a highly entertaining series of stories showing a not too distant future where America splits into two nations – Red & Blue country. Part of what makes the books so funny is that even though there is plenty of fictional mockery nothing sounds too far fetched to be unbelievable.

But what we’ve seen here shows that the likelihood of Schlichter’s books coming true looks far more likely than it did two weeks ago.

Whenever I see people in a stressful political confrontation, I like to diffuse the tension by standing as close to them as I possibly can while banging a giant drum.

Just a reminder that when the media gets something horrifically wrong and look like idiots they will band together & dig up anything & everything to try to exonerate themselves and prove they were right all along.

Only if you are a fucking idiot https://t.co/0XaDwY0JwT