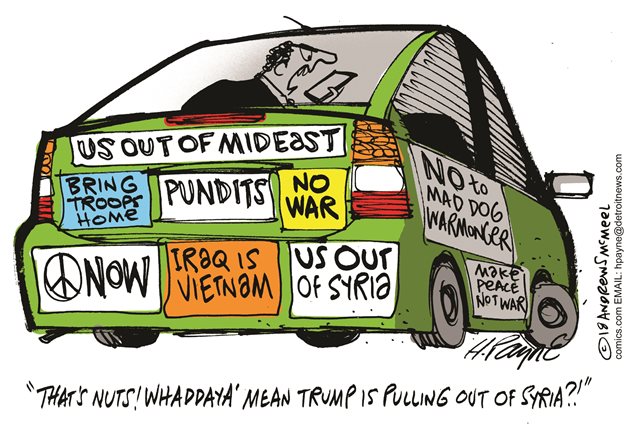 Happy 2019! We’re only a few days in and our friends on The Left have wasted no time ringing out the old craziness with some fresh, new insanity!

There’s a time and place to give The Radical Left the mockery that they deserve, such as with a skewering article from Kurt Schlichter or Mark Dice laughing through one of his videos. That would be most of the time, but this isn’t one of them. James Allsup gave a thoughtful response video to actress Mayim Bihalik’s (Blossom back in the day, Big Bang Theory today) social media meltdown. It’s an eleven minute video that’s well worth your time as he dives into why so many Leftists are so unhappy.

A painful lesson that the 1st Amendment doesn’t extend to being entitled to a megaphone while on your employer’s time.

For all that Climatistas will open almost any argument by suggesting that any disagreement with them “…is just oil money talking”, it’s interesting to look at who’s paying for their talking points.

12/29 – THE CURE FOR SOCIALISM: BETTER BUREAUCRATS!

“The 2019 plan is one of adjustment to current realities. We cannot spend more than we earn,” Economy Minister Alejandro Gil Fernandez said at a session of the National Assembly last week.

Great. now even The Radical Left in Cuba is smarter than our Radical Left. And too many Republicans.

At least the residents of the state where I grew up have maintained some sanity, even if they elect representatives who don’t.

It still annoys me that someone as talented as Goldberg and who was one of my favorite writers for years has thrown in with the Vichy Conservatives. Or more likely has always been one and the Trump presidency has simply unmasked him.

More of this, please.

I didn’t know any of them – good to bookmark for reference,

A good look at how following their anger is probably not going to fo The Radical Left any favors.

The left doesn’t care about these things. Leftists care only about their own power and perks, not about ordinary Americans. That is the reason they are all praying (well, not “praying,” exactly) for a Great Depression in 2019. They want America to fail so that a small clique – themselves – can lord it over the chumps of the heartland. They want Trump defeated at all costs. Their hatred of Trump and the voters who elected him is fanatical and vicious, and that’s why they are predicting – and hoping for – the Great Depression of 2019.

I posted the article from Ace of Spades for its usual great titles, and when you visit it be sure to click through to the original piece in The Washington Examiner. Mollie Hemmingway’s portion (which Ace posts in its entirety) makes for a stark contrast with the preceding writeup from Vichy Conservative David French.

And you thought that The Radical Left just hated Christian-based schools! Nope, Orthodox Jews (who coincidentally voted heavily for Trump) are hated by Lefties too!

It didn’t take long for Democrats to show us the maturity and competence that we can expect from them controlling the House for the next two years.

And I’ll leave you with a piece that is surprisingly funny given the source – Can Liberals Survive the Apocalypse?

How petty & small can you get?

Then the CNN anchor grills brother of the detained American ON AIR about the anti-CNN post.

Dear "principled' Democrat Senators: it's all meaningless until you stop hating America and start representing the American people. https://t.co/1yPTz8YUUc

When historians dissect the Fall of the American Empire, this will be the cover photo… pic.twitter.com/Ytjdk4Ke4U

BS. Denying CAGW is like denying that Bigfoot is threatening your children. https://t.co/LM6j48cP6P

The CNN New Year Eve spectacle is a reminder that those are the people who believe they are your superiors and deserve to govern you.

But we didn't get to enjoy it because we all died from the repeal https://t.co/o2rfZh5oC8

It's bad enough to be in a wheelchair, but to have to listen to Dave Matthews AND to be used as political prop by a internet rando is something I wouldn't wish on anyone. https://t.co/923KoxCpK3

This tweet makes me sick. It's 2018 in the most prosperous country on earth and people are still buying Dave Matthews tickets. https://t.co/jFKy5rJadC