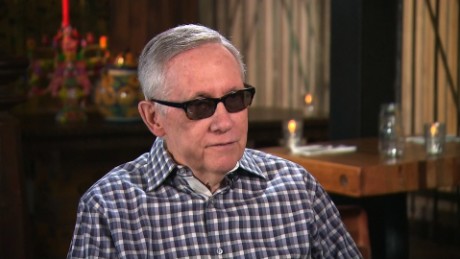 Dying people tend to show remorse and seek and offer forgiveness. Not Harry Reid. He is going out as the amoral liar he proved himself to be. He tore into Trump recently:

Harry Reid, the former Senate Majority Leader who is suffering from pancreatic cancer, has given a rare interview in which he compares a “weird” President Trump unfavorably to mafia bosses who “are really good with what they do.” He told The New York Times: “Trump is an interesting person. He is not immoral but is amoral. Amoral is when you shoot someone in the head, it doesn’t make a difference. No conscience.” When the writer Mark Leibovich suggested there was a hint of grudging respect in Reid’s words, he added: “I think he is without question the worst president we’ve ever had… We’ve had some bad ones, and there’s not even a close second to him.” Reid refused to say whether he backed his successor Chuck Schumer’s tactics in dealing with Trump. “I do not call Schumer,” he said. “I call him once in a while—not weekly… I talk to Nancy often. I love Nancy Pelosi.” The Times piece states, bluntly, that Reid “does not have long to live.”

But if you’ll remember, Reid lied his ass off about Mitt Romney.

Reid first made the accusationagainst the former Massachusetts governor in a 2012 interview with the Huffington Post. At the time, Reid claimed that a Bain Capital investor told him Romney didn’t pay taxes for the previous 10 years. This, Reid claimed, was why Romney hadn’t released his tax returns.

“He didn’t pay taxes for 10 years!” Reid said. “Now, do I know that that’s true? Well, I’m not certain, but obviously he can’t release those tax returns. How would it look?”

A few days after the HuffPo interview, Reid made the same charge on the Senate floor, this time claiming as fact that Romney paid no taxes.

“As we know, he has refused to release his tax returns. If a person coming before this body wanted to be a Cabinet officer, he couldn’t be if he had the same refusal Mitt Romney does about tax returns,” Reid said. “So the word is out that he has not paid any taxes for 10 years. Let him prove he has paid taxes, because he has not.”

Not only was he unrepentant about his lies, he was proud of them. Huffington Post:

The bogus claim created a media firestorm at the time, and earned Reid a “pants on fire“ rating from PolitiFact and “four Pinocchios“ from Washington Post Fact Checker Glenn Kessler, who wrote that Reid “has no basis to make his incendiary claim” and should “hold himself to a high standard of accuracy when making claims about political opponents.”

When asked about it three years later, you would think Reid would apologize or at least show the proper level of contrition that matches the irresponsible and undignified act of using the Senate floor to spread false allegations about a politician from the opposing party.

But Reid has no regrets. “I don’t regret that at all,” he told CNN’s Dana Bash on Tuesday in the interview clip above. “Romney didn’t win did he?”
Talk about amoral.

It’s a sad day for Reid, who will pass with this additional stain on his otherwise wretched, miserable life which saw him use his office to become quite wealthy.