Sorry, Virginia, there is no Huber Claus. 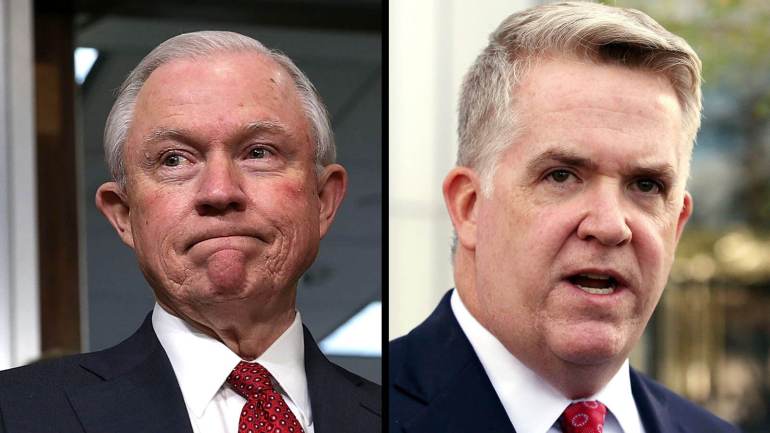 It is time for all of us who care about justice to come to a reckoning.

It’s not going to happen

Nothing is coming. Nothing is going to happen. The evil are not going to pay.

Whitaker will do squat.

Barr will do squat.

That FISA app will never be declassified.

We’ve all been had.

Many of were waiting for that October/November surprise especially given all the hoopla surrounding John Huber. Huber was made out to be the savior:

During a March 2018 interview on Lou Dobbs’s Fox Business Network show, GWU professor Jonathan Turley made some incredible comments about Attorney General Jeff Sessions’ decision to appoint U.S. Attorney John Huber to investigate potential government wrongdoing during the Obama administration that few appreciated at the time. Turley said that by having Huber work with the Department of Justice, the administration is combining all the work of the DOJ inspector general and previous investigations, with an active prosecutor who can quickly bring charges, seek indictments, and get results for President Trump — far more quickly than a second special counsel could. Many Republican lawmakers have called for a second special counsel to investigate concerns about the Mueller probe with regard to FISA abuse and the Steele dossier, but Turley argues that this method will bring faster results.

“I think [Sessions] did the right thing here,” said Turley. “I think the president should listen to General Sessions on this one.”

Sessions “can always appoint a special counsel,” Turley explained, but that should not even be necessary because Huber “has the ability to prosecute cases.”

“Do these prosecutors have the same power to investigate and get to the bottom of things that a special counsel would have?” Varney asked.

“Actually, yes,” Turley answered. “I think people are missing what could be a brilliant move here by Sessions. What he did is he essentially combined the powers of the inspector general with the powers of a line prosecutor.”

“This prosecutor does have not just the experience and training to look for a criminal case; he has the ability to move a case of that kind” in court, Turley emphasized.

Not only that, but if Sessions believes crimes were committed, but Huber for some reason does not bring charges, “Sessions has reserved the right to go ahead and appoint a special counsel,” said Turley.

“That’s a powerful combination,” he observed.

It was as though Huber could raise the dead. Given Sessions’ ridiculously obsequious and unnecessary accommodation to Adam Schiff and company in removing himself from all things Russia we all pinned our hopes on Huber.

There have been many well-intentioned serious, dedicated and honest people on Twitter ferreting out “secrets” and deciphering redacted information on official documents.

So we waited for the shoes to drop. They never did.

For me, the crack in the facade began when Trump, who had promised to declassify the FISA documents, suddenly did a 180 and held off. At first the argument was don’t expose sources and methods of our allies. But if our “allies” were involved in a conspiracy against a US candidate for President, then f**k them. Expose it all.

OK, I thought, perhaps were Trump to declassify the FISA docs before the Russia investigation was ended Mueller might hit him with an obstruction charge.

The Russia investigation is not going to end before the next election.

Then we were told that three Clinton Foundation whistleblowers were going to testify and tax fraud and play for play. The FBI was not going to let happen without interruption. It raided the home of one whistleblower who had been a cooperating witness.

Raided the home of a cooperating witness? Where have I heard that before?

Sufficed to say, Cain was not available to testify. Two other whistleblowers did testify and what they said was damning:

The Clinton Foundation operated as a foreign agent ‘early in its life’ and ‘throughout it’s existence’ and did not operate as a 501c3 charitable foundation as required by its and is not entitled to its status as a nonprofit, alleged two highly qualified forensic investigators, accompanied by three other investigators, said in explosive testimony Thursday to the House Oversight and Government Reform Committee.

Now we come to the dirty-gritty. The piss you off stuff.

Moynihan and Doyle testified that they had to repeatedly resend materials to Huber’s office because Huber kept “losing” them:

Moreover, the two whistleblowers — Lawrence Doyle of DM Income Advisors and John Moynihan of JFM Associates (above) — informed Meadows and his committee that they turned over evidence to Huber’s office three times since Huber was assigned this investigation in April because those materials kept getting ‘lost.’

Moynihan and Doyle had a boatload of documents which they refused to hand over to Rep. Mark Meadows

Doyle and Moynihan have some 6,000 pages of evidence against the Clinton Foundation, which they say was acting more as a foreign agent rather than a non-profit charity. They also said they’ve given the IRS and the FBI copies of their evidence.

But they refused to provide those documents to Meadows’ committee, infuriating him.

“If you’re not going to share your information with this Committee, my patience is running out,” Meadows said, giving them some time to consult with their attorneys.

“We will not be providing those materials…” Moynihan said.

Then to top it off the DOJ refused to make Huber available to testify.

The deep state DOJ and FBI run the show. They aren’t going to allow anything significant to see the light of day. The FBI slammed Goodlatte down when Goodlatte wanted to make transcripts public.

I’ll let Paul Sperry put the coda to this story:

While some witnesses and their attorneys complain he’s not doing his job, some critics who once had high hopes for Huber now suspect he was never expected to. They say Huber’s appointment was always political, that the Justice Department had no interest in exposing its own corruption and named this longtime department official to mollify Republicans who clamored for the appointment of a second special counsel to investigate FBI and Justice activities under the Obama administration.

“At the time, people wanted a special counsel, but Jeff Sessions announced he brought in Huber and people said, ‘OK, we got Huber on it,’ ” former Justice Department prosecutor Victoria Toensing said. “But it was a head fake.”

Now a private attorney in Washington, Toensing represents a whistleblower in the so-called Uranium One scandal, who she says still has not been contacted by Huber. Her client, Doug Campbell, an FBI informant who claims to have evidence that Clinton helped Russians secure U.S.-based uranium rights in a quid pro quo for large donations to her family’s foundation and speaking fees for former President Bill Clinton from the Russian company at the heart of the deal.

“He should have contacted Doug Campbell within the first two months” of being assigned by Sessions to look into the 2010 uranium deal, Toensing said.

“It’s a farce,” she added. “It’s an embarrassment how this has been handled.”

Huber was put in place by Sessions to slow roll everything. Nothing is going to be finished or resolved before the 2020 election. Nothing.

Lindsey Graham is the last hope. There is no Huber Claus. There never was. This is why that f**king Comey has that perpetually smug face on. He knows.

The Twitterverse is the other casualty in this debacle. It’s lost all of its relevance and is reduced to being just another social media platform from which to cast invective and  spin fantasies. I have a lot of blocking to do.

It’s never been a sure thing. Justice never is. The deep state has been being installed for a long, long time. There is probably no one in Washington that, if not involved, ignored something that should have been revealed and now bears some responsibility that prevents them from coming forth. Plus, all those people that suddenly drop dead or “commit suicide” around the Clinton’s is no coincidence and no doubt also is a strong deterrent.

This country is severely wounded.

No one with short term historical memory ever thought Huber was going to change anything about our entrenched 2 tier justice system.