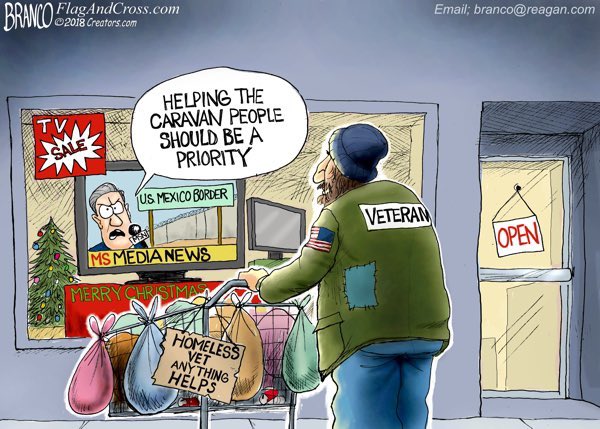 Welcome to our last post before Christmas! You’d think that the holiday season would put even Leftists in a good mood, but you would be wrong! Since they need to be Scrooges and try to make us Normals as miserable as they are, let me start by being a Scrooge and raining on one of their sacred cows:

Spoiler alert: This sacred cow of The Radical Left is not as “Green” as they fantasize it to be.

Actually, all of these “scientific studies” prove only one thing – there is no study too idiotic that Leftists won’t swallow wholeheartedly if it reinforces their beliefs in how brilliant and virtuous they wish they were

BSA still represents America, as it has for over a century. But now instead of mirroring our health, it mirrors our sickness and decline.

Friendly question Lefties – might there be a possibility that having judges and AGs harass the President and every administration appointee set a precedent that you might not like the next time you’re in power? Just something to ponder

I didn’t know that North Carolina was 55% Democrat

This is why you never give The Radical Left an inch on anything. They howled for platitudes like “Diversity” and “Inclusion”, and when they get it they start howling bloody murder

The always great Victor Davis Hanson summarizes how our leaders are now completely open about how much they despise the people they’re supposed to represent.

12/17 – Shocker: Starbucks’ Anyone-Can-Use-Our-Bathrooms-Policy Results in Stores Locking Up Their Bathrooms and Denying Them to Everyone, Including Paying Customers

It is truly a tragedy that we don’t have actual journalists working in the mainstream media.

Ah, good to see pushback against these religious cult fanatics and their lawfare

As much as it pains me to link directly to The Washington Compost, the article helpfully introduces us to the concept of “Environmental Racism”, which I believe is defined as “Wealthy, bigoted left wing religious cult members oppose creating jobs in predominately black neighborhoods”

12/20 – Now That The Russian Collusion Narrative Is Deflating, The Left Is Shifting Goalposts

A better question is when doesn’t The Radical Left shift the goalposts the moment any of their insane narratives fall apart?

Don’t worry, no auto-launch – I wouldn’t do that to you! Bill Whittle and Scott Ott take apart a recent editorial in The New York Times, and while Bill Whittle is too much of a gentleman to call out the author on an obvious solution, I’m not. For that I turn to the urban poet, William Milano, with some constructive feedback for any Climate Cultists.

ICYMI – …And I hope you didn’t, since I just published this on Thursday night, but I decided to weigh in on the “controversy” regarding the classic Christmas song “Baby it’s Cold Outside”

Instead of an archive, in honor of Slayer announcing that they’re giving their fans one last leg of their farewell tour, I give you this bizarre mashup that was sent to me – the Benny Hill/Slayer Mashup Disaster.

And finally, I’ll leave you with my favorite song of all time. Merry Christmas, everyone.

"In a country of 325 million, the network turned to the one person who absolutely can’t be trusted to speak honestly about Obamacare" writes @BecketAdams https://t.co/Z9pXzJWgV4

Since Nancy Pelosi likes to pass things before reading them, just add the wall funding in the bill and vote

Trans women competing in Miss Universe pageants and in sports competitions makes a complete and utter mockery of modern feminism;

Men now have an avenue to slowly take over and dominate everything—so long as they “self-identify” as women.

“Patriarchy” gets the last laugh. 😂

They will still hate you even if you pretend to believe their lies?#caring

May the coming year bring you all health, prosperity and contentment

The tighter they try to grip with their fists the less that fits. The Yellow vest protests have spread to 7 countries. The go fund me for we will build the wall nears 14 million in only 4 days.

I am so old I remember when SNL was funny.
They say to feel young do something you loved to do as a child but dang it I dont heal as quick as I used to.

They never understand the fact without fossil fuels they could not create their green agenda. Without tons of carbon they could not have their sacred Climate Summits. Figure THAT ONE out.

Should we expect a “Latte Subsidy” passed by the House soon?

The Boy Scouts was on the list of organizations the Nazis were going to eliminate when they conquered England, too. Liberals succeeded here.

I don’t think a liberal abusing their oath of office and turning their public office into a personal weapon against Trump because of their immaturity and hatred for our Constitution is even newsworthy any more. EVERY liberal in power does the same thing.

In Chicago they are issuing photo ID’s to illegal immigrants. So, THEY are smart enough to figure it out and US citizens aren’t? Maybe Democrats should talk to some other than their supporters. Only those wanting to UTILIZE voter fraud oppose fighting voter fraud.

The search for something whiny crybabies won’t destroy continues.

They simply can’t figure out why people will not give up their liberty so they can have have MORE liberty. Yet, they are supposed to be “smart”.

12/17 – Shocker: Starbucks’ Anyone-Can-Use-Our-Bathrooms-Policy Results in Stores Locking Up Their Bathrooms and Denying Them to Everyone, Including Paying Customers

I first experienced this at a McDonald’s in downtown San Antonio where they had a electromagnetic lock on the bathroom doors to keep the homeless from taking up residence in them. The city doorways smell like piss there. Great liberal success. That Amy Schumer is a real class act, ain’t she? Unca Chuckie should be so proud.

Most of the “journalists” work for Soros. CNN’s “Journalist of the Year” has been exposed for making up stories, which is probably what sealed the deal for CNN.

Sort of give lie to the notion that there are not liberal judges and attorneys who do not utilize ideology or agenda in their decisions, doesn’t it?

Look at what the left is doing to the world economy right now in order to try and jab Trump. They don’t care about jobs of people’s livelihoods. They want power and control.

12/20 – Now That The Russian Collusion Narrative Is Deflating, The Left Is Shifting Goalposts

While trolling the liberal echo-chamber on the NYT site, a liberal actually admonished me for referring to Russian collusion; “We have moved well past collusion.” Some are too stupid to even realize what they are admitting.

Since Nancy Pelosi likes to pass things before reading them, just add the wall funding in the bill and vote

Aaaaand… that’s what they did.

Men now have an avenue to slowly take over and dominate everything—so long as they “self-identify” as women.

Why nothing about Pete Davidson threatening suicide over the uproar he brought down on himself by being a jerk to a wounded veteran and having that wounded veteran bring him out of his funk?

@kitt: I hear you on not healing as quickly – I need a lot more recovery time from spending evenings in mosh pits with crazed dudes, most of whom I’m old enough to be their father!

@Deplorable Me: Pete Davidson? A Leftist being angry over the consequences of their choices isn’t exactly a news item.
Oh, wait. That’s sort of the theme of every link I post, isn’t it?

@Brother Bob: I was thinking of waterskiing, dirt biking on the 50 cc, and bare back riding, yes I had a saddle it was for the toddlers that wanted a ride. Hospitalization and traction stuff.

Thing is: who wants to take advice (political or personal) from those on the Left when they are SO stupid?
Take this Lefty…..

She was also a campaigner and was chairman of Young Socialists Cardiff.

Among her life decisions was this one: how far can I stick my head out of a moving train’s window?
Well, it depends on if you want to live or die.
She stuck her head out the train window and hit a tree branch with it, and died.

@Nan G: Is there a down side to this story?

@Deplorable Me: The tree was traumatized.

@kitt: #9 Wouldn’t getting herself killed count as a carbon offset to whatever damage she did to the tree?

Time is running out. Remember to wish a lefty “Merry Christmas” this holiday season as it really pisses them off. They consider it downright intolerant because to them its racist, xenophobic, Islamaphobic, homophobic, and worst yet, it directly conflicts with their Marxist religion.

And Merry Christmas to all the normal people out there!

@another vet: Thanks, AV – Merry Christmas to you & your family!