James Comey: No Fidelity, no Bravery, no Integrity 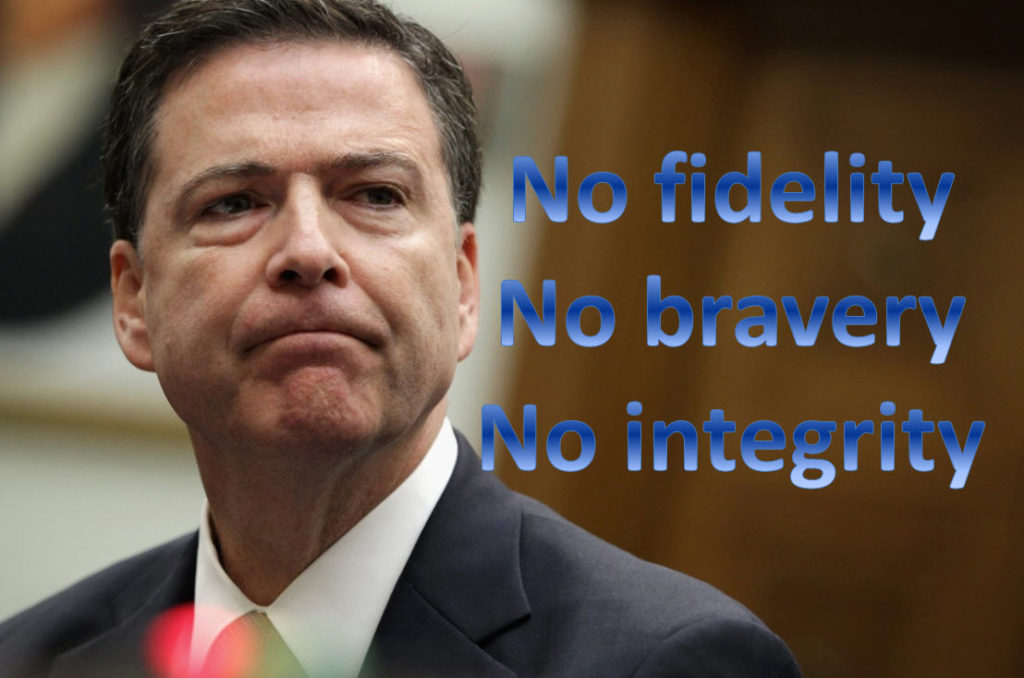 There is a lesson to be learned from the Russia investigation farce and it could not be more clear.

Never, ever trust the FBI. Ever.

One man has done more than anyone else to destroy the reputation of the FBI.

Comey is easily the most prissy prig ever to be a Director of the agency. He is also the most political and arrogant of any past Director. In that regard, he is not alone. James Clapper and John Brennan revealed that they are politically driven operatives more interested in furthering their own agendas than in doing the jobs they were tasked. All three lied to Congress. All three have decided that Trump must be taken down.

Comey intentionally screwed the Clinton email investigation so badly that it serves as a template for what a law enforcement agency should never do.

Comet insists on seeming to be an incompetent idiot: 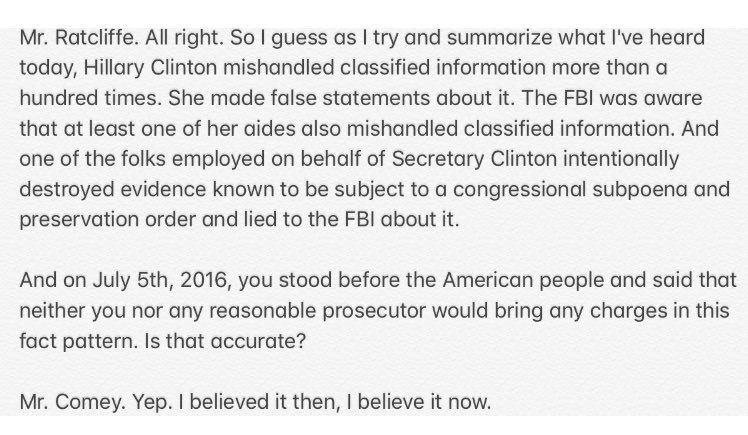 Comey went so far out of the guidelines to allow the potential targets of the investigation run the show that it never had a chance of being properly done. He created a two tiered system of justice– one for liberals and another for the rest of us. He was targeting Trump right from the outset. Any investigator worth a damn would have wanted to know who paid the garbage dossier used to secure a FISA warrant. Not Comey. His response was “Who cares?”

That means anyone- and I mean anyone- can level an accusation using phony and unverified information and the Director of the FBI is going to use it if it suits his political goals.

And it did. Then during a hearing Comey said this:

“I first met then-President-Elect Trump on Friday, January 6 in a conference room at Trump Tower in New York.  I was there with other Intelligence Community (IC) leaders to brief him and his new national security team on the findings of an IC assessment concerning Russian efforts to interfere in the election.  At the conclusion of that briefing, I remained alone with the President-Elect to brief him on some personally sensitive aspects of the information assembled during the assessment.

“The IC leadership thought it important, for a variety of reasons, to alert the incoming President to the existence of this material, even though it was salacious and unverified.  Among those reasons were: (1) we knew the media was about to publicly report the material and we believed the IC should not keep knowledge of the material and its imminent release from the President-Elect; and (2) to the extent there was some effort to compromise an incoming President, we could blunt any such effort with a defensive briefing.”

He left out a lot of key information. He provided the hook for the media to release the information. Comey did not tell Trump that Hillary and DNC  laundered money through Perkins Coie to pay for dirt obtained by Christopher Steele second and third hand from Russian operatives.

Maybe. Maybe Russians were never involved at all. Steele’s hatred for Trump was so intense he could have made it all up.

I never doubted that.

The we come to Michael Flynn who, like Carter Page and George Papadopoulos, was used as a pawn in Comey’s game of thrones. Someone wiretapped Michael Flynn and captured a completely legal conversation Flynn had with Russian Ambassador Kislyak which was then leaked to the Washington Post.

Comey had no interest in that gross violation of the law. Not one iota.

Flynn was reportedly cleared in his participation in the conversation:

The FBI eavesdropped on telephone calls between President Donald Trump’s national security adviser and the Russian ambassador but found nothing improper, a U.S. intelligence official said.

The official, who spoke on condition of anonymity because they were not authorized to speak to the media, said late Monday that there was never a formal “investigation” of the calls in December between retired Army Lt. Gen. Mike Flynn and Sergei Kislyak, Russia’s ambassador in Washington.

Comey reiterated that in March 2017:

According to two sources familiar with the meetings, Comey told lawmakers that the FBI agents who interviewed Flynn did not believe that Flynn had lied to them, or that any inaccuracies in his answers were intentional. As a result, some of those in attendance came away with the impression that Flynn would not be charged with a crime pertaining to the Jan. 24 interview.

And somewhere down the road, Flynn became guilty. To insure that that came to be, the FBI (McCabe) told Flynn not to bring a lawyer to the “casual” conversation. the FBI has been on a political crusade to create crimes which then can be used to visit ruin to a Presidency.

I almost forgot. Comey knew all along exactly what he was doing

In an interview this month with Nicolle Wallace at the 92nd Street Y in New York City, Comey delighted his Upper East Side audience with his tale of how he exploited the Trump White House’s disarray in its initial days to send two FBI agents to talk to then-national security advisor Michael Flynn without honoring the usual processes (e.g., working through the White House counsel’s office).

Comey said that in a different administration that’s “something I probably wouldn’t have done or maybe gotten away with.” He apparently didn’t consider how that might sound to anyone not already inclined to delight in the wit and wisdom of James Comey, or old enough to remember when an FBI director pushing to “get away” with things wasn’t so amusing.

He really is a sh*thead