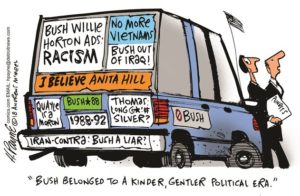 Greetings Mr and Mrs America and all of our ships at sea! Another week closer to Christmas and the New Year, and another week of insanity from The Radical Left. First we go back in time and jump into The Wayback Machine to land in the previous week:

Exactly what it sounds like. Another case of The Radical Left wanting to control or ruin anything good in the world. Be sure to watch the accompanying video.

Friendly advice for all of the cowards in The Profession Formerly Known As Journalism: Instead of shrieking about a President who has the audacity to call you on your BS, you should band together and call out your side’s Brown Shirts. This is only going to get worse.

It boggles the mind that half of this country was ready to elect a president who had committed treason. Then you remember that we were one rigged primary away from that same half of the country voting to turn the US into Venezuela.

By this rationale, isn’t there a stronger case for Hillary claiming to not be a felon or Obama claiming to be qualified for any kind of leadership job?

After last week’s archive piece, I’m happy to see this stupidity from the last administration finally getting reversed.

12/9 – Breaking News: Heisman Trophy Winner Once Used ‘Queers’ as a Slur on Twitter

Of course, some member of the Gaystapo took the time to trawl back five years into the feed of a 20 year old to try to ruin his  life. Sadly, Murray posted on Twitter the apology that some agent/coach/friend fed to him. How cool would it have been if he had just responded, “F*** off you Commie Bastards!” And of course, The Babylon Bee weighed in as they do so well with Heisman Winner Proves If You Work Hard And Believe In Yourself, You Too Can Have Journalists Try To Ruin Your Life By Combing Through Your Old Tweets

But before Murray, on Friday Kevin Hart was dis-invited from hosting the Oscars for tweets that the Gaystapo found offensive. The tweets were old, Hart had previously addressed them, and here’s a great story about Hollywood’s hypocrisy getting called out.

Congratulations to the Yellow Vesters! You know that you’ve struck fear into the heart of The Radical Left when they claim that the Russians are behind your movement!

I really hope that this leads to a movement of users who download the app and en masse accuse all of their local Imams of anti-Islamic sin of homosexuality. And any Google executives working in Indonesia.

Yep, even when the NPCs at Sports Illustrated do something good they find a way to do it wrong

You might have seen a few of the “Don’t misunderestimate Gulag Barbie” posts buzzing around this past week. Schlichter addresses the threat while giving it the mockery it so richly deserves…

We need to take these hacks head-on, both for ourselves and our kids. Don’t think for a moment that the millennial generation is not stupid enough to embrace the agents of their own servitude. The first generation to fail to surpass the success of the previous one is perfectly capable of eagerly voting to make their own lives worse in the name of…whatever it is that motivates these fools. Probably kale and feelings.

Both deserve laughter, but it’s a mistake to laugh them off. It’s a mistake our country might not recover from.

RIP, Weekly Standard, the flagship publication of the Vichy Conservatives.

No archives this week, but one quick note on the tweet roundup. I’m embarrassed to admit that even with my sick mind it took a minute for the last tweet at the end to hit me.

That should stop the outbound U-Haulshttps://t.co/BoljDKVynk

Again, notice the dishonest "tweet surfaces" framing as if they had nothing to do with it.

That adds up to approximately…