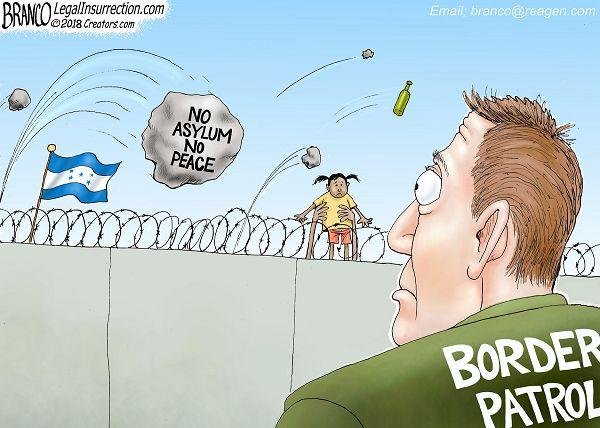 Welcome back, everyone! After last weekend’s five days of crazy travel I’m grateful to be back home for a relatively normal few days. And of course, our Lefty amigos never stop being insane:

I was almost ready to give Tinseltown a pass on this, given how difficult it must be to come up with anything dumber than anything that Gulag Barbie actually says. Then I came across this gem on The Babylon Bee: Aides Force Ocasio-Cortez To Watch Entire Run Of ‘Schoolhouse Rock!’

Take a guess how a whistleblower who shined a light on corruption between Hillary and our intelligence services was treated. Go ahead, guess!

As much as I feel badly for and support France’s protesters, there are more proactive ways to deal with the bad policies that you voted for. For starters, stop voting for them?

Wait a minute – bad policies of The Radical Left have additional negative side effects? I am SHOCKED, SHOCKED I say!

Kurt Schlichter goes straight to the point. What’s going to be embarrassing for The Radical Left will be 20-30 years from now when President Trump dies of old age and they’ll be pretending that they loved Trump and that he was so reasonable compared to whoever their latest Emanuel Goldstein will be when that day comes. The Internet never forgets

12/4 – REPORT: The Weekly Standard Likely Closing Up Shop in the Coming Weeks

While you hate to see any media outlet go under, it’s hard to feel sympathy for any of the Vichy Republicans. Amazingly, there just isn’t a market for “Conservative” publications that hate Conservatives

Sounds crazy, but you know that the anti-fun Leftists will reflexively oppose anything remotely cool

Scratch a prog, find a tyrant

12/5 – NY Times: Grassroot Uprisings Are Dangerous For Democracy Or Something

You might have thought that The Pirate’s Cove was just a site that is kind enough to link this post every week and provides a few of the links for these roundups. He also gives some good analysis, such as this piece showing how our press hates the commoners over in Europe who don’t accept their moral and intellectual superiors as much as they hate the commoners here! And if you used to follow him on Twitter, you might have noticed that his old account got sent to Twitter Gulag. Here is where you can follow him now.

Leftists being classless over funerals is nothing new. remember Paul Wellstone or John McCain?

Just because our Lefty pals don’t give a damn about their own hypocrisy is no reason for us to not mock them over it!

As I’ve come to realize over the years, if any story seems too great or horrible to be true… it probably is. I saw shrieking headlines from such respected, nonpartisan sources as The Washington Post, The Economist, and The Nation, so obviously the worst we heard about Conservatives was obviously true. Then I saw this post from Commentary, which can be annoyingly Kristolite at times, but this wasn’t one of them. While I’m sure that others got this scoop first, Commentary was the first place where I got to see my skepticism rewarded. I do agree with the basics of their assessment – unseemly, but not unprecedented. This is also the latest case of Leftists becoming furious at their own disgusting tactics being used against them

12/7 – Feds Spend $149,631 To Determine How Ranchers ‘Perceive and Communicate’ About Climate Change

Where is the “separation of church and state” crowd when you need them?

From the archives, since I mentioned reaching out to young people by lowering the drinking age let’s go back four years for School Lunch Statism – The Republicans’ Latest Blown Opportunity

I heard someone give a succinct explanation of how we can compare George H. W. Bush’s presidency with that of @realDonaldTrump : “Sometimes we need Mother Teresa. Sometimes we need Dirty Harry”

The Korean War is over✅

Economy is best it has ever been✅

What is the left resisting?

So instead of being arrested for selling weed, you'll be arrest for not filing your quarterly training reports to the California State Weed Shop Labor Regulation Boardhttps://t.co/jek9vnG55G

The @GOP and every Republican candidate need to run this from June 2020 thru election day. https://t.co/0m61CyxAzB

Dan Quayle misspelled potato one time and he was labeled an idiot for the remainder of his political career.

There is nothing funnier than NYC and DC journos, huge progressive champions of public transportation, bitching endlessly about how miserable their commutes are every day.

41: Bush is a lying warmonger for oil!

43: Bush is a lying warmonger for oil, and also Hitler!

A more perfect description of the #Obama Administration would be impossible to find https://t.co/Dbh0bmYw4U