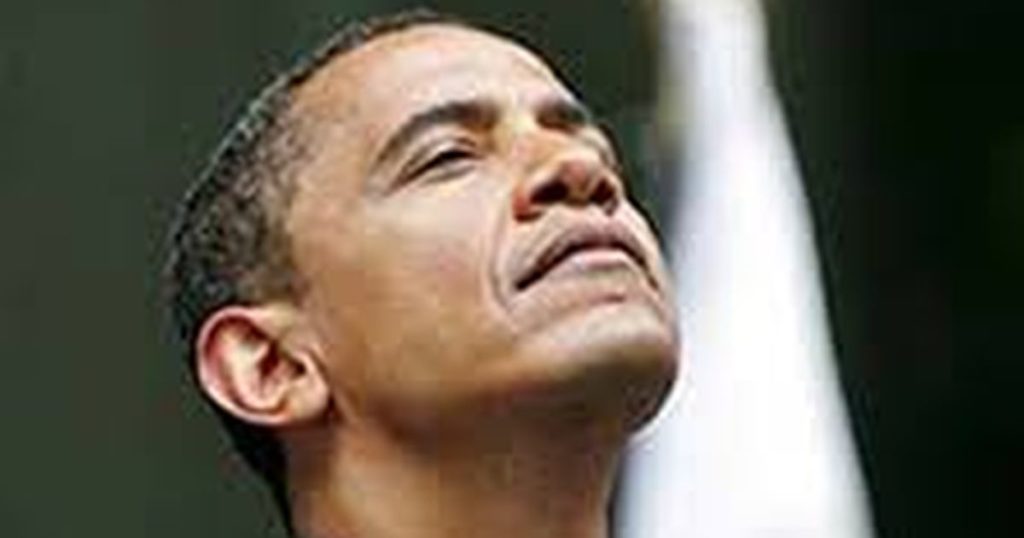 The world’s biggest narcissist has burned through his meager reserve of quietude. He cannot stand the adoration being heaped upon his successor and has bolted from the tradition of past Presidential dignity and restraint from comment.

He wants you to notice him again. His ego is four quarts low and needs refilling.

He wants you to know that he deserves the credit for things he didn’t do. He wants you to believe that he is responsible for America being the world’s leading oil producer.

Obama: "Suddenly America is the largest oil producer, that was me people … say thank you." pic.twitter.com/VfQfX1SR0x

obama blocked offshore oil drilling in the Atlantic and the Arctic.

obama was against fracking.

He conducted a war on oil:

President Barack Obama’s enemies have long accused him of waging a “war on coal.” But a very different war on oil and gas is coming next.

The newest phase of Obama’s environmental agenda has the oil and natural gas industry in its crosshairs, with plans to curb greenhouse gas pollution from rigs and refineries, tighten oversight of drilling on public lands and impose a strict ozone limit that industry lobbyists slam as “the most expensive regulation ever.”

The administration still might hand some modest victories to the industry along the way — as early as Friday, for example, the Interior Department may give Shell Oil a final green light for expanded drilling off Alaska’s Arctic coast. And unlike the massive climate rule that the EPA issued for power plants last week, the administration’s actions on oil and gas will be quieter, more piecemeal and harder to track.

Still, the oil industry’s top lobbying group says it’s facing a “regulatory avalanche or a tidal wave” — one that some of Obama’s critics have been bracing for.

The administration has “ridden this horse as far as it wants to ride it,” GOP energy lobbyist and strategist Mike McKenna said in an interview, tying the oil and gas crackdown to Obama’s efforts to make wind and solar power more competitive. He said Obama and his team “have always been very clear-eyed about their strategy: they want to make affordable, dependable, traditional fuels like oil, gas and coal more expensive. … This is just the natural rush at the finish line.”

But greens say it’s past time for Obama to start reining in oil and gas as the next step in the climate legacy that he’s made such a priority for his second term. For these activists, the EPA’s power plant rules represented only a down payment.

(He also said America has a “great smugness” about wealth and status. There is no one more smug about his own highfalutin status and the guy who once famously said “At some point you’ve made enough money” is shoving millions into his pockets every month.)

obama opposed oil at every turn.

America being the world leader in oil? Sorry, barack, you didn’t build that.

Seen on Twitter. It does a nice job of interpreting obama:

Once again, his narcissism overcomes his tenuous grasp of reality. It’s time to for obama to leave the stage.

Because the MSM has hated America for at least 70 years they will publish his lies as facts!
They have done such antiAmerica propaganda before. A classic example is JFK2. A man who served 20% (1 fifth)of a tour. He lied and said he served 2 tours. His second tour was an obvious lie for anyone born before 1959 with an IQ above Jeb Bush. JFK said in ’68 Nixon ordered him “back to Nam”! Were you over 9 in ’68 (as almost all the MSM “reporters”were) you know it was not only a lie, BUT A VERY BAD LIE! Nixon could not order anyone anywhere in ’68! He was a citizen living in exile in Cal.

FAKE NEWS has been a staple for the MSM at least 70 years Obama doing anything to help the American economy is FAKE NEWS. But the leftists in the media seem to have no honest news, and have had none for decades!

IIRC, Obama, after the Court ruled his “Moratorium” on drilling unconstitutional and ordered the ban lifted, simply ignored that court order.
He promised us $6.00/gallon gas prices and got 2/3rds of the way there.
Seems I also recall him telling us, “you cannot drill your way out of this” (high oil prices).
But we did so, only just on privately owned lands.

All that said, he does look good in a tux.
Skinny guys always do.
(When does he have “enough” money?)

his narcissism overcomes his tenuous grasp of reality. It’s time to for obama to leave the stage.

No no no what would we do without the comic relief?
He has such good, coffee out of your nose, lines….
“I’m extremely proud of the fact that over 8 years we have not had the kinds of scandals that have plagued other administrations.”
No dearie yours encompassed them all.
“You didn’t build that.”
Really it just appeared from fairy dust and unicorn farts.
“If you like your plan, you can keep your plan. Period.”
Damn I need Midol
“I am not in favor of concealed weapons. I think that creates a potential atmosphere where more innocent people could (get shot during) altercations.”
Lets see whats under those secret service coats, is that a holster or are you just happy to see me.
“It’s here that companies like Solyndra are leading the way toward a brighter and more prosperous future.”
See post
“The reforms we seek would bring greater competition, choice, savings and inefficiencies to our health care system.”
Mission accomplished except for that competition and choice and savings part.
“I do think at a certain point you’ve made enough money.”
Can you drop a note to the former SOS?

Once again, his narcissism overcomes his tenuous grasp of reality.

That and he always knows his beloved media will not call out his lies. I notice one thing he DIDN’T make sure he took credit for was the worst environmental disaster in history. His MMS director gave BP waivers to start up Deepwater Horizon when they hadn’t properly tested their safety equipment… which blew out. Think THAT was bad? Well, then he compounded the error by yielding to union demands that foreign ships not be allowed to aid in the control of the slick and clean up. Afterwards, as if anyone but himself was at fault, he shut down production in the Gulf.

Obama did nothing to encourage wider exploration and production of energy and everything to strangle it out of existence. Yet, his followers like to pretend they are offended when they think they hear a “lie”. They LOVE lies and liars.

Barack Hussein Obama is a textbook study in arrogance, narcissism, and delusional mental disorder. ‘Egotistical’ and ‘Insecure’ dont even cut it. This man is literally coming apart mentally and emotionally in a very public way.

told you all 10 years ago this idiot was a narcissistic douche.

@Spurwing Plover: That may have been a typo, but that is exactly what he did. Trump has, once again, cleaned up Obama’s mess.

@MOS #8541: Your insult to douche cannot be tolerated.

Whether or not Obama had anything to do with it, it’s a fact that U.S. oil production had already surged long before Donald Trump had even announced his candidacy. Production was already rapidly expanding in 2013. You can easily find an abundance of articles on the production surge dating from that period.

Trump boosting U.S. oil production seems to be another recent detail added to the right’s ever-expanding alternate history and mythology.

Ever notice how often Pres Trump owns the downside?
But also notice that Obama only ever owns the upside…..even if he has to wait until Trump hands it to him on a silver platter?

Whether or not Obama had anything to do with it, it’s a fact that U.S. oil production had already surged long before Donald Trump had even announced his candidacy.

But that’s not the point or even close to it. The point is that not only did Obama have NOTHING to do with the energy boom, he did all he could to kill it. Yet now, he wants to take FULL credit for it. Having no accomplishments of his own he has to lie and steal them.

Your fundamental problem is that you elected one of the worst imaginable successors for an effective and very well liked president. This is why you spend half of your time attacking a man who has been gone for nearly two years, and the other half praising someone that a majority of Americans hopes soon will be.

@Greg: We would stop commenting on Obama if he would go away the way most all other Presidents have done. Instead he keeps making stupid statements that only his lemmings will buy into.
He’d better hurry up any buy that Chevy Volt like he promised. Production is stopping on them.

Obama seems to turn up a lot more often on conservative forums and websites than anywhere else.

The former president of Shell Oil called bullshit on the self enveloped, anti-American, neo-Marxist ex-President as well.

@Greg: Obama was an utter disaster. The only reason he was “liked” is because the media helped him lie his way out of all his scandals, corruption and failures. Trump took over a near disaster, fixed the economy, fixed foreign affairs, is fixing trade and will fix immigration. The left fears their exposure of corruption and failure so much they are trying to destroy him before he gets the DOJ to fully expose them.

Obama brings this on himself. Instead of slinking back into the obscurity of failure, he has to come out and lie about his “legacy”, trying to take credit for what Trump has repaired and accomplished. No one asked Obama to come forth and lie about his contribution to energy production or the recovered economy. He does this because he is a glory whore.

Hey, would it be bad if the media was lying to the public?

I’ve heard he polls well, as long as his past bad acts of grouping little girls (rape culture) and making fun of immigrants’ accents, jobs and colors don’t get brought up.
Joe Biden is a CREEP! GROPING CHILDREN!!!
Biden’s presidential candidacy questioned after gaffes

I don’t know which Dem the Dems will put forward, but feminists have decided women should never even cook for men again, how could they ever want a man who treats them like females???

Edited to add:
Dems’ top constituencies are women and POC.
So, Biden is screwed.

@Nan G: Well, don’t forget Democrats have no principles, so Biden becoming Groper in Chief is a possibility. Remember, they still support Bernie and he advocated the idea that women secretly WANTED to be raped (a concept that fits right into the mindset of Bill Clinton and Biden). Leftists could not care less if he groped their children as long as they get cheap health care insurance that is too expensive to use.

@Mully: lemmings. That is another word for Greg, right?

Greg
Obama seems to turn up a lot more often on conservative forums and websites than anywhere else.

That’s because he only tries to claim the things that conservatives do as his own. You certainly don’t think he wants any credit for anything a Dimocrat is doing, do you? For 8 years, every thing that happened that was bad during Obozo’s term was blamed on Bush. He didn’t want credit for anything. As soon as everything started turning to roses, he suddenly wants credit. Well, we’re all still perfectly willing to give him full credit for Obozocare.

All those pictures of him ‘massaging young girls’ doesn’t bother you just a little bit? He’s a pervert. Oh excuse me, that is what you would want. sorry.

@Redteam: I do wonder if biden ever flew with epstein and clinton on “vacation”?