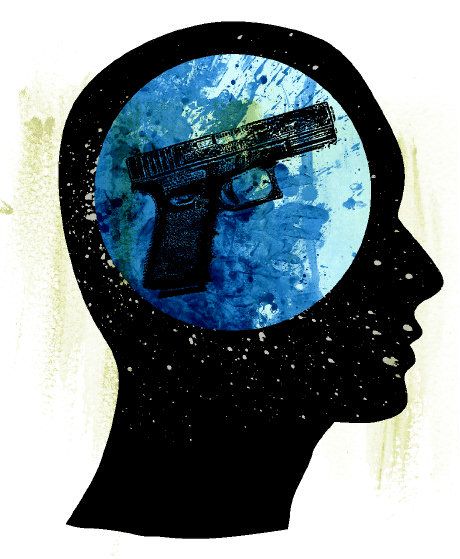 It’s all too familiar. It’s all too tragic. And it keeps on happening. A few days ago an ex-Marine shot up a club and killed 12 people before taking his own life.

He had a history of being troubled and yet he was allowed to retain his weapon.

The gunman who killed 12 people at a country music bar in California fired a bullet through the wall of his mother’s home during a volatile row in April and spent hours holed up inside until police coaxed him out but he was cleared by mental health officials and was somehow still allowed to own the Glock 45. used in Wednesday’s attack.

And that makes him like pretty much every other mass murderer. Mentally ill. The signs are almost always there and no one takes them seriously enough.

Police said they had five encounters with him, four of those no more serious than a traffic citation.

But in 2004, police responded to Bowers’ apartment on what they call a medical situation. The chief says he is prohibited by law to speak about the nature of that call, but sources close to the investigation say Bowers threatened to kill himself.

According to those law enforcement sources, who spoke on the condition of anonymity, officers responded to the potential suicide call and were able to talk Bowers out of killing himself. The same sources say Bowers agreed to voluntarily commit himself to a mental health clinic, but never followed through.

Roughly a year before the massacre at Marjory Stoneman Douglas High in Parkland, school officials were warned by a student that Nikolas Cruz had mused about shooting up the school, according to a young woman’s sworn statement to police, which was released Friday.

As a result of that warning, she said in her statement, Cruz was “expelled” from the student body.

If true, it would add to a list of what critics have called a series of warning signs missed or downplayed by the Broward school district, law officers and mental health professionals, all of whom had troubling encounters with the Parkland teenager.

Cruz seemed jittery and disheveled, she said, with leaves in his hair. He kept looking from side to side. The girl told investigators she overheard Cruz say he was trying to find something he paid for — that it was supposed to be in the parking lot. Her boyfriend later confirmed this, telling her Cruz, who had just turned 18, claimed he had arranged to buy a gun from someone who was supposed to leave it in the bushes.

She told investigators her boyfriend and Cruz didn’t really hang out together but the two would talk and that Cruz would confide in him. About three weeks after the Walmart incident, Cruz told her boyfriend he wanted to shoot up the school, she said.

Crisis workers from a South Florida mental health facility were called in 2016 to hold alleged gunman Nikolas Cruz for a psychiatric evaluation after he sent out a Snapchat video in which he cut his arms and said he wanted to buy a gun, according to a mental health report.

But after speaking with Cruz, Henderson Behavioral Health health professionals chose not to hospitalize him, according to a November 2016 Florida Department of Children and Families investigative report obtained by NBC News. The department officially released the report Tuesday after NBC News published details from it.

Over a seven year period police were summoned to Cruz’s home 39 times. He telegraphed his intent to become a ” professional school shooter.”

The alleged shooter of a South Carolina church suffers from “numerous mental disorders.”:

His lawyers cited a competency hearing in which a doctor determined Roof has “social anxiety disorder, a mixed substance abuse disorder, a schizoid personality disorder, depression by history and a possible autistic spectrum disorder.”

The disorders hamper Roof’s ability to stand trial, his lawyers contend, saying the effects include:

His teachers wanted him to go to an alternative school for mental help.

Paddock had no known mental health disorders, but his primary care doctor told police that he believed Paddock had bipolar disorder. Paddock never wanted to discuss the topic, the doctor said.

The Las Vegas physician, who was not identified in the report, described Paddock to police as “odd” and as someone who displayed “little emotion.”

Paddock, 64, refused antidepressant medications, but he did accept prescriptions for anti-anxiety drugs. The doctor noted that “Paddock seemed fearful of medications, often refusing to take them.”

Investigators believe he had a severe undiagnosed mental illness.

Devin Patrick Kelley, who alleged killed 26 people in a Texas church escaped from a mental health facility and left many warning signs behind.

But the triage forms, e-mails and Post-It notes provide no window into Cho’s tortured mind.

The records indicate that Cho sought help at the university’s Cook Counseling Center three times in November and December 2005, twice on the phone and once in person. Each time, he was assessed but not treated.

On Dec. 14, 2005, the day Cho was released from a psychiatric hospital, was declared a danger for threatening to kill himself and was ordered by a judge to receive involuntary outpatient treatment at Cook, the therapist who saw him there did not evaluate his mood. Instead, she drew an “X” through the preprinted triage form.

Probably the only Tim Kaine thing with which I agree:

Just two weeks after the shootings, Virginia Gov. Timothy Kaine signed an executive order that required anyone court-ordered to receive mental health treatment be added to a state database of people prohibited from buying guns.

Omar Mateen was very likely mentally ill. His wife believed him to be bipolar.

You probably notice the pattern.

I’ve been writing about this for a long time. This is what I suggested nearly six years ago:

– Find and confiscate illegally possessed weapons. That means heading into the inner cities and barrios and cleaning them out.
– Publish the names and addresses of those who illegally possess weapons (That would mean real journalism)
– Weapons must be properly secured.
– Weapons probably should not be permitted in the households in which someone is mentally ill.
– End “relief from disability” for felons
– Properly identify and treat mental illness, especially psychopathy
– Severely punish the illegal transfer of weapons

Keeping weapons out of the hands of the mentally ill is really not arguable and it might be the most doable. A mental health screening has to part of the process to obtain a weapon and that has to include PTSD. Chris Kyle was killed by a vet with PTSD.

If we want to stop the mass murders, this has to happen.  It’s not the weapons.

It’s who is allowed to have them.