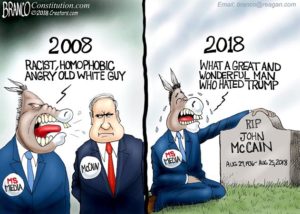 Welcome back, everybody! The last of the kids are back at school and the last of the Democrats have completely lost their minds! If you don’t believe me look no further than…
9/6 – How Many Fans REALLY Hate the Diverse Casting in ‘Star Wars’?

Back to the dopey but fun Observer Arts, they do a deep dive study of hateful tweets to decide that while the toxic fans are meaner toward female diversity hires, they remain confident that “The Star Wars Community” bands together against those toxic fans. Completely unmentioned in this post is how real Star Wars fans have banded together against watching their shi**y movies.

If you’re thinking of staying home for the mid-term elections, remember that this is the kind of person who wants more power over your life

Dr. John gives a good takedown of our last president’s hypocrisy. As the saying goes, “How can I miss you if you won’t go away?”

9/9 – David Hogg Makes A Fool Of Himself In Canada, Gets Mic Taken Away

When Michael Moore is the sane, rational one on the stage you’ve got problems.

“Your speech is violence. Our violence is speech.” – I

“Your speech is violence. Our violence is speech.” – II

“Your speech is violence. Our violence is speech.” – III

9/11 – ‘Threats of Rape and Strangling’ Force D.C. McAllister Into Hiding After Anti-Abortion Tweet

“Your speech is violence. Our violence is speech.” – IV

9/11 – Kaepernick Got What He Wanted from Nike, Now He’s Stabbing Them in the Back

Congratulations, Nike. You’ve reached the Kissinger territory where we’re rooting for both sides to lose

I’m old enough to remember when Leftists were against foreign interference in our elections.

9/13 – Norm McDonald vs The Thought Police

Good short video from Michael Loftus that also briefly touches on the new #WalkAway banning scandal. If you’re not familiar with him, in addition to his short YouTube videos he does a good weekly podcast that usually shows up every Monday

Apologies in advance for giving The Washington Compost a link, but hearing Colbert whine about The Radical Left not being give enough time to spout off uninterrupted for their favorite “Beto Male” might be the first truly funny thing that he’s said in years!

I feel like Democrats are the Ivan Drago of society – “Whatever he hits, he destroys!”

And from the vault, I give you our next installment of Economics for Politicians, Chapter 3: Introduction to Macroeconomics – So that’s how government spending fits in!

Take down every statue in America. Get it over with already. But EVERY one. See how that works out. https://t.co/aevIWWqOEw

Remember when Kavanaugh drowned a woman? Oh wait, that was Senator Kennedy.

Remember when Kavanaugh raped a woman & took advantage of his intern? Oh wait, that was President Clinton.

But ya sure I definitely believe that Democrats care about protecting women from predatory men.

It is miraculous that Trump not only beat the Bush dynasty, 16 Republicans, the FBI, the media, voter fraud cheaters, the political class, Clinton dynasty, the Obamas, the elites in BOTH parties, but he also beat tech companies that used their platforms to try and beat him

“Never forget! Unless we’re talking about which group was behind the attack. In that case please develop permanent amnesia”

This is how it’s done.

Georgetown College Democrats and College Republicans coming together in remembrance.