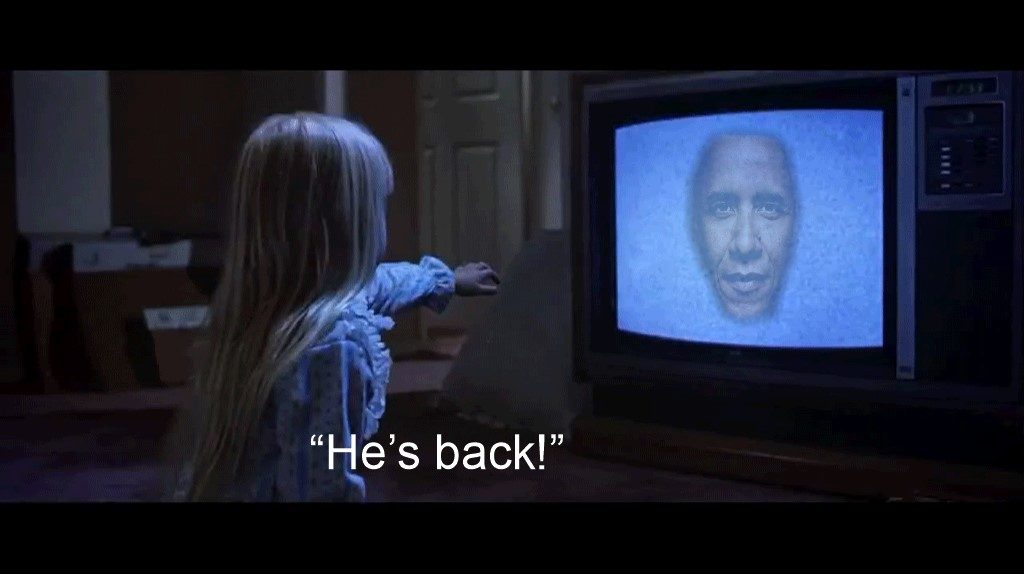 And he’s still full of sh*t.

He gave a speech the other day and during that speech referred to himself 102 times in a 64 minute speech.

All told, the former president referred to himself – I, My, Me – more than 102 times in about 64 minutes, while simultaneously engaging in the type political pot shots he criticized Republicans for.

Obama’s favorite word seemed to be “I,” which he repeated at least 87 times, followed by more than a dozen references to “my” or “me.”

He wasted no time in hammering Trump supporters

Former President Barack Obama slammed tens of millions of Americans during his speech on Friday, claiming that they were paranoid, divisive, and resentful.

“Neither party has been exclusively responsible for us going backwards instead of forwards,” Obama said. “But I have to say this because sometimes we hear a plague on both your houses.”

“But over the past few decades, the politics of division and resentment and paranoia has unfortunately found a home in the Republican party,” Obama continued. “This Congress has championed the unwinding of campaign finance laws to give billionaires outside influence over our politics.”

Obama continued by claiming that the Trump administration has “systematically attacked voting rights to make it harder for young people and minorities and the poor to vote,” without offering any evidence to validate his claim.

He let loose a torrent of lies during his lecture. Among them was this one:

“It shouldn’t be Democratic or Republican to say that we don’t threaten the freedom of the press because they say things or publish stories we don’t like,” Obama said. “I complained plenty about Fox News, but you never heard me threaten to shut them down or call them enemies of the people.”

He may not have called them enemies, but he sure treated them like enemies:

When the Obama Justice Department (DOJ) investigated leaks about North Korea, it completely spied on Fox News’ Washington correspondent, James Rosen. The DOJ accessed Rosen’s security badge records to track his time at the State Department and traced his phone calls. They even snooped on his personal e-mails after obtaining a dubious search warrant. The administration referred to Rosen as a possible “criminal co-conspirator” in the leak.

You can add James Risen and Sharyl Attkisson in there as well. And, in fact, he called Americans “enemies.”

obama took credit for the Trump economy but he counts on liberals having no long term memory.

What aren’t resentful, divisive, or paranoid are statistics. And those statistics tell us that Obama failed as a president and Trump has succeeded – both for minorities and all Americans collectively.

Economic growth during the Obama years should have been unusually high, since he took office the year after a financial collapse and stabilization. Growth is usually strongest after recessions.

But during the Obama years, economic growth averaged only around 2 percent and wages stagnated. New York Times columnist Paul Krugman and other left-wing economists invented a new term – “secular stagnation” – to argue that we were permanently in a new era of slow growth and there was nothing that could change the situation.

But President Trump did change the situation. Annual economic growth is now averaging about 3 percent and the last quarter saw rapid growth at an annualized rate of 4.2 percent. Wages are finally growing – some 2.9 percent over the last year, which is far better than anything achieved under Obama.

Unemployment for women and minorities is near historic lows, as it is for all Americans, and manufacturing jobs are coming back. These are facts, not opinions.

He insisted he was not worried about another depression or recession but the unemployment rate, stuck at just below 10 per cent, was a major concern.

“What is a danger is that we stay stuck in a new normal where unemployment rates stay high, people who have jobs see their incomes go up, businesses make big profits, but they’ve learned to do more with less, and so they don’t hire,” he said. 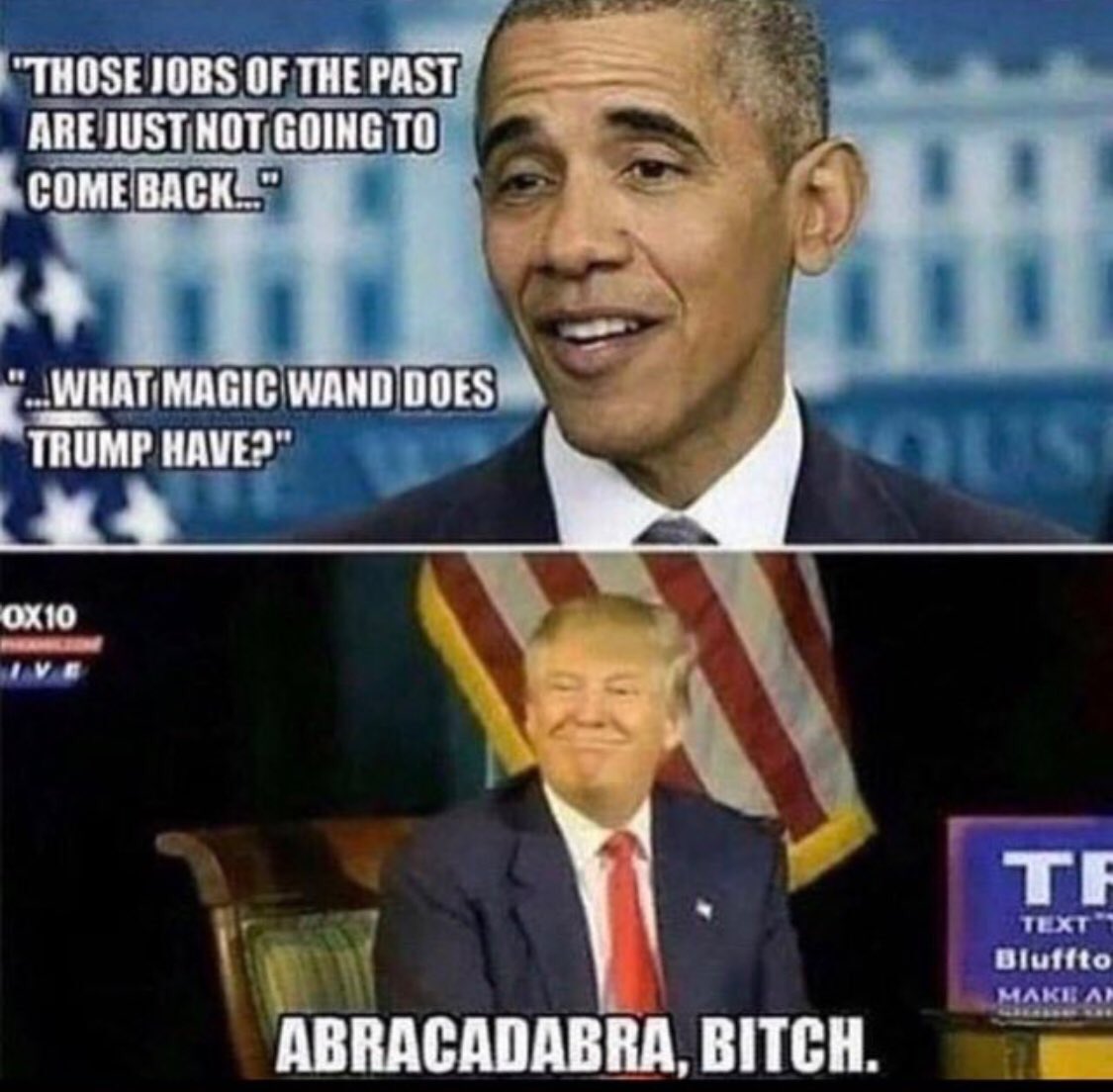 Obama never had a full year of 3% GDP growth

“How hard can that be? Saying that Nazis are bad.”

Hey obama, how hard would it be to say “radical Islamic terrorism”?

‘The United States is not at war with Islam and will never be. In fact, our partnership with the Muslim world is critical in rolling back a fringe ideology that people of all faiths reject.” So spoke President Barack Hussein Obama in Turkey last week. Following in the footsteps of the Bush administration, Mr. Obama wants to avoid labeling our enemy in religious terms. References to “Islamic terrorism,” “Islamic radicalism,” or “Islamic extremism” aren’t in his speeches. “Jihad,” too, has been banished from the official lexicon. But if one visits the religious bookstores near Istanbul’s Covered Bazaar, or mosque libraries of Turkish immigrants in Rotterdam, Brussels or Frankfurt, one can still find a cornucopia of radical Islamist literature. Go into the bookstores of Arab and Pakistani immigrant communities in Europe, or into the literary markets of the Arab world and the Indian subcontinent, and you’ll find an even richer collection of militant Islamism. Al Qaeda is certainly not a mainstream Muslim group — if it were, we would have had far more terrorist attacks since 9/11. But the ideology that produced al Qaeda isn’t a rivulet in contemporary Muslim thought. It is a wide and deep river. The Obama administration does both Muslims and non-Muslims an enormous disservice by pretending otherwise.

obama called Benghazi a “conspiracy.” This elicited a scathing response from Kris Paronto

Whenever Trump so much as belches, he gets fact checked. obama, on the other hand, dances by the fact checkers without  them so much as blinking. “Things can get worse” said obama.

Indeed. Giving back control of the country to a party that has veered so far left that it stands on the doorstep of socialism would be far worse. obama was always great at making things look bleak.

In fact, he was great at making them bleak too. Now obama sounds like a little more than a sniveling whiner.