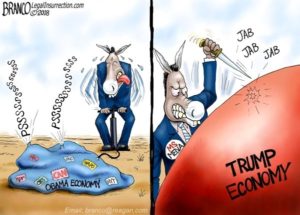 Welcome back everybody! Football is back, between college ball returning last weekend and the NFL this weekend. Just as the summer is generally a slower time of year, the steady stream of Leftist insanity we had during the warmer months has immediately shifted into high gear now that the fall is here. Let’s get to it!

8/29 – They Love Him Now: But Hypocritical Leftists Used To Trash John McCain

I had a few pieces on The Radical Left’s sudden beatification of McCain last week; here’s a more complete roundup

8/30 – It’s come to this: Andrew Cuomo calls officers who take criminal aliens & human traffickers off the street ‘a bunch of thugs’

Chris, Chris, Chris. The race for the title of “Dumbest Cuomo” is a marathon, not a sprint!

This proposed idiocy from Down Under is exactly what it sounds like.

I genuinely miss the days when the phrase “Is the Pope Catholic?” was funny

9/2 – THE DEMOCRATIC PARTY AND THE CHINA SYNDROME

Part of me wishes that these scandals with China could involve a few Republicans so that the MSM and the rest of The Radical Left in America could pretend to give a damn about this.

This could be (and might end up as) a post of its own, but for now I’ll just sum this up with the prediction made by Facebook commenter Mark T:

The NFL died of COLIN cancer

You know the headline I’d like to see some day?
“Democrats go one f***ing week without acting like a bunch of toddlers who didn’t get their sippy cup quickly enough”

In all fairness, Mahmoud Ahmadinejad is probably only slightly less Anti-Semitic than you average Leftist

Shorter argument: “The fact that we didn’t nip our campus Brown Shirts in the bud and allowed them to flourish it’s now too inconvenient for us to stand up to them and enforce the law.” In the words of the late, great Ronnie James Dio, “If you listen to fools, The Mob Rules!”

After two years of declining television ratings, the early numbers from Thursday night’s season opener between the Eagles and Atlanta Falcons can’t be the start the NFL was hoping for.

According to numbers provided by NBC, the Eagles-Falcons primetime opener drew a 13.4 overnight rating, down eight percent from last year’s NFL kickoff game between the Kansas City Chiefs and New England Patriots.

And the reason? It can’t be related to wokeness!

While there has been loud criticism of the NFL by President Trump over allowing players to protest racial injustice during the national anthem, the ratings declines are mostly being driven by viewers eliminating their cable subscriptions in favor of streaming services. Starting this season, the NFL is allowing fans to stream in-market and primetime games live on their phones and tablets using the NFL Mobile or Yahoo Sports apps.

News flash, genius. The game was nationally broadcast on NBC. Which isn’t on cable.

Now that I think about it, the author of this post has an interesting view of the boycotts.

From the vault, we continue the Economics for Politicians series with Lesson 2: Introduction to Microeconomics – Why Prices Matter

And of course, with the return of football season I present to you the updated for 2018 Top 100 Reasons The Philadelphia Eagles Are The Coolest Team in Football

One last note, as you go through the Tweet roundup be sure to click on the video embedded in the last one to get the accompanying audio. Watch to the end – you won’t be disappointed!

On the heels of its Kaepernick success, Nike expands its ad campaign to Julius and Ethel Rosenberg. https://t.co/xn39tBqAEC#NikeBoycott #BoycottNike pic.twitter.com/zx0fjsLASP

My woke eight year old asked "Weren't these same people calling McCain a mentally ill racist Nazi a decade ago?" Then he observed how "this cheesy hagiography only began when McCain decided to betray the voters who elected him." Then he made a fart noise. #caring https://t.co/cZq5JoCf3i

I have said this like 400 times already but I'll say it again.

You asked me to vote for McCain and I did.

You asked me to vote for Romney and I did.

You told me not to vote for Trump but I did anyway.

We need to know: Will Kavanaugh force Colin Kaepernick to stand while forcing Ryan Gosling to plant an American flag on the Moon establishing a breeding colony for enslaved Moon Handmaidens?