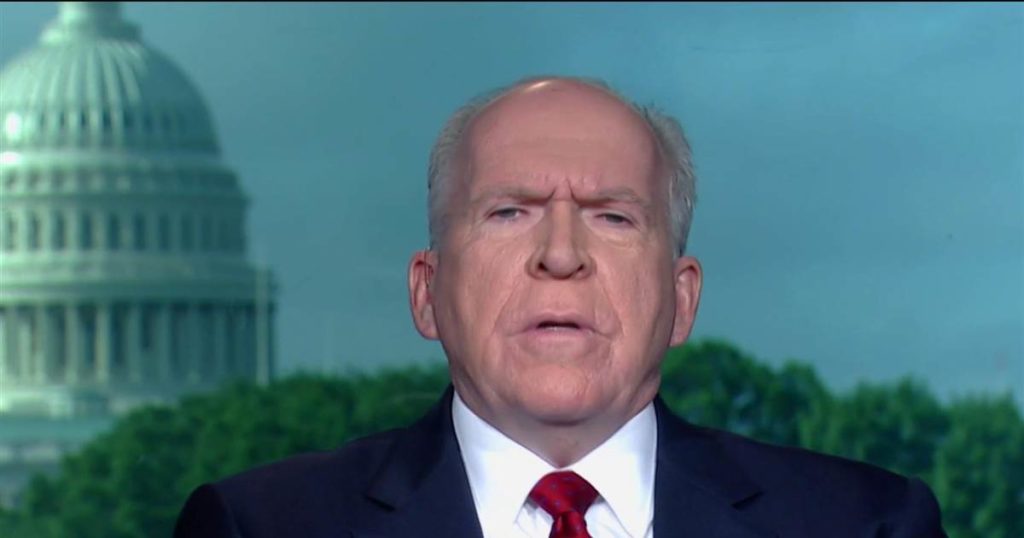 Historian Douglas Brinkley was speaking with Don Lemon last week on CNN. Brinkley made a statement that left me incredulous. He called John Brennan’s tenure at the CIA “impeccable.” It makes you wonder what kind of historian Brinkley is and throws into doubt all of his past work. “Impeccable” is not the word that describes Brennan’s career. “Lacking candor” is far more accurate and it’s probably too kind.

He is a serial liar. Brennan’s record is anything but impeccable.

In 2011 he lied about drone strike civilian casualties

In 2011, Brennan claimed that dozens of U.S. drone strikes on overseas targets had not killed a single civilian. This remarkable success rate was not only disputed at the time by news reports — even supporters of the drone program called it “absurd” — but as the Bureau of Investigative Journalism and the New York Times both reported later, President Obama received reports from the very beginning of his presidency about drone strikes killing numerous civilians. As Obama’s top counterterrorism adviser at the time, Brennan would have received these reports as well, so either Brennan knew that his claim was a lie, or he is secretly deaf.

Following the Benghazi disaster, Brennan forced all the survivors to sign non-disclosure agreements. For some reason, Brennan did not want Americans to know the truth. Brennan initially denied it: 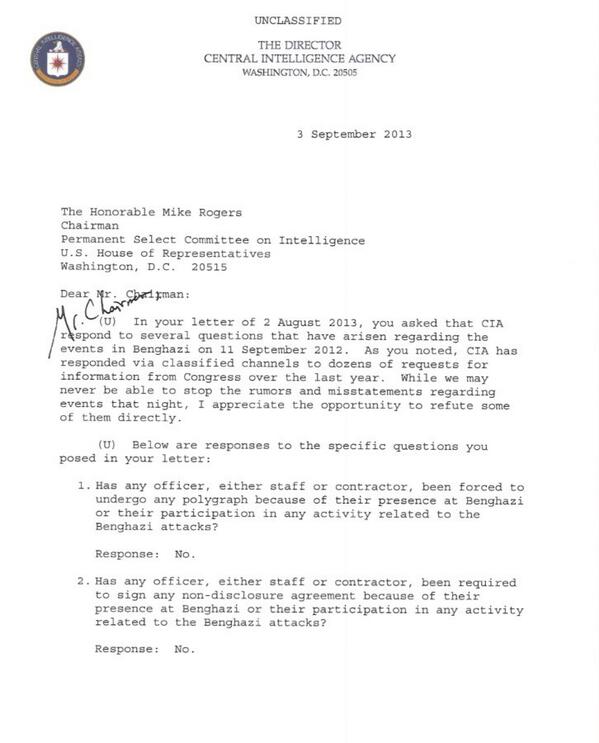 In March, at the Council on Foreign Relations, CIA Director John Brennan was asked by NBC’s Andrea Mitchell whether the CIA had illegally accessed Senate Intelligence Committee staffcomputers “to thwart an investigation by the committee into” the agency’s past interrogation techniques. The accusation had been made earlier that day by Sen. Dianne Feinstein (D-Calif.), who said the CIA had “violated the separation-of-powers principles embodied in the United States Constitution.” Brennan answered:

As far as the allegations of, you know, CIA hacking into, you know, Senate computers, nothing could be further from the truth. I mean, we wouldn’t do that. I mean, that’s — that’s just beyond the — you know, the scope of reason in terms of what we would do. {…}

And, you know, when the facts come out on this, I think a lot of people who are claiming that there has been this tremendous sort of spying and monitoring and hacking will be proved wrong.

“When the facts come out.”  Sound familiar?

One survivor refused to sign it. Brennan saw that he was punished.

A CIA employee who refused to sign a non-disclosure agreement barring him from discussing the Sept. 11, 2012 terrorist attack in Benghazi, Libya, has been suspended as a result and forced to hire legal counsel, according to a top House lawmaker.

Rep. Frank Wolf (R., Va.) revealed at an event on Monday that his office was anonymously informed about the CIA employee, who is purportedly facing an internal backlash after refusing to sign a legal document barring him from publicly or privately discussing events surrounding the Benghazi attack.

The revelation comes about a month after several media outlets reported that CIA employees with knowledge of the terror attack had been forced to sign non-disclosure agreements (NDA) and submit to regular polygraph tests.

In 2014 John Brennan lied about spying on the Senate

As reports emerged Thursday that an internal investigation by the Central Intelligence Agency’s inspector general found that the CIA “improperly” spied on US Senate staffers when researching the CIA’s dark history of torture, it was hard to conclude anything but the obvious: John Brennan blatantly lied to the American public. Again.

“The facts will come out,” Brennan told NBC News in March after Senator Dianne Feinstein issued a blistering condemnation of the CIA on the Senate floor, accusing his agency of hacking into the computers used by her intelligence committee’s staffers. “Let me assure you the CIA was in no way spying on [the committee] or the Senate,” he said.

“The facts will come out.”  Sound familiar?

After the CIA inspector general’s report completely contradicted Brennan’s statements, it now appears Brennan was forced to privately apologize to intelligence committee chairs in a “tense” meeting earlier this week. Other Senators on Thursday pushed for Brennan to publicly apologize and called for an independent investigation. Sen. Ron Wyden said it well:

But the director of the CIA – and the architect of America’s drone program, who will be all but defending torture for the next several weeks – should do more than that. Apologies aren’t enough.

In 2017 Brennan lied about his knowledge of the Trump dossier:

In his May 2017 testimony before the intelligence panel, Brennan emphatically denied the dossier factored into the intelligence community’s publicly released conclusion last year that Russia meddled in the 2016 election “to help Trump’s chances of victory.”

Brennan also swore that he did not know who commissioned the anti-Trump research document (excerpt here), even though senior national security and counterintelligence officials at the Justice Department and FBI knew the previous year that the dossier was funded by the Hillary Clinton campaign.

He either lied or he is utterly incompetent. When Brennan, who is now a liberal hero, offended the left they all wanted one thing:

It’s difficult to understand why so many intelligence chiefs are critical of Trump stripping Brennan of his security clearance. Until you learn just how much money it’s worth.

Hannity drew from Bruner’s new book, “James Comey’s net worth has skyrocketed 4000 percent. By the time he left [the Department of Justice] in 2005 and came back in 2013, [James] Comey made 6.1 million dollars after [Robert] Mueller granted his employer, Lockheed Martin — the largest contractor in history — a billion-dollar boondoggle. Under Mueller’s direction, the FBI granted multiple spy contracts to Lockheed Martin while Comey was advising them on the legality of their operations. Comey also received another six million dollars working for one of the world’s largest hedge funds and an additional $500,000 for unused vacation time.”

“Mueller cashed in, as well,” continued Hannity. “In 2013, when Comey took over the FBI while Mueller left to start consulting at a consulting firm, he made more than 3.5 million in about year giving speeches and representing clients who had previously enriched his FBI director; clients like the world’s most profitable spy corporation.”

They’re not concerned about principle. Brennan has made some suggestions that he might take legal action against Trump.

Trump has not only humiliated Brennan, he put a torpedo in Brennan’s wallet.

And when you hear Brennan asserting that the President is guilty of treason, remember all the above and also remember something Brennan famously said:

“I have to determine what the truth is.”

He is a serial liar.

the answer to your question, It makes you wonder what kind of historian Brinkley is…”?

Or. A hater of Americans

Brennan also says that none of what he has done was politically motivated. However, since we know he was motivated by the information in the Steele dossier to instigate Trump for alleged collusion and that everyone SHOULD have suspected the information, paid for by Hillary as campaign fodder, was suspect and should have been fully vetted before anyone used any of it prosecute a case against the President of the United States (remember how the FBI handled Hillary with kid-gloves). Beyond any possible shadow of a doubt all of this is totally politically motivated for there is nothing else there TO motivate it.

The left loves liars and lying for there is not much else that can promote their agenda. If someone will lie about one of their enemies, they love that person even if they hated them before. One thing the left does not fear or shy away from is hypocrisy.

I can remember a time when having the CIA involved with national news (the church commission hearings) was scandalous. The experts in disinformation and meddling in governments to bring down heads of state, bringers of coups, are now talking heads and no one blinks an eye.
http://www.carlbernstein.com/magazine_cia_and_media.php

Should there be any question about Brennans security clearance being taken away? Should you believe any single thing from a serial liar and disinformation specialist?
All the news the deepstate wants you to believe, and updates at 11- 10PM central