Trump isn’t trying to silence his critics. He’s stripping away security clearances from those who conspired against him

The stripping of John Brennan of his security clearance has predictably caused a great deal of faux outrage on the part of the left. None of it makes sense. The ruckus has caused some democrats to prove themselves even more stupid than previously thought. Sen. Richard Blumenthal (D-CT) asserted that there is a Constitutional right to security clearance.

Blumenthal said, “This is not only an abuse of power it is illegal.”

He added, “He has the authority to do a lot of things, but not in a way that violates the law.”

Blumenthal might have learned this during his imaginary tour in Vietnam .

It’s simply not true. A Pentagon analyst was stripped of his security clearance for coming upon the giant sums of money being paid to Stefan Halper, the CIA asset who was being used as an FBI informant.

A Trump-supporting Pentagon analyst was stripped of his security clearance by Obama-appointed officials after he complained of questionable government contracts to Stefan Halper, the FBI informant who spied on the Trump presidential campaign.

Adam Lovinger, a 12-year strategist in the Pentagon’s Office of Net Assessment, complained to his bosses about Halper contracts in the fall of 2016, his attorney, Sean M. Bigley, told The Washington Times.

On May 1, 2017, his superiors yanked his security clearance and relegated him to clerical chores.

Bigley pointed out something really important

In an internal October 2016 email to higher-ups, Mr. Lovinger wrote of “the moral hazard associated with the Washington Headquarters Services contracting with Stefan Halper,” the complaint said. It said Mr. Baker hired Mr. Halper to “conduct foreign relations,” a job that should be confined to government officials.

“It was a topic of conversation within the office,” Mr. Bigley told The Times. “What is Halper doing, and why is he being paid astronomically more than others similarly situated?”

No one worried about his rights. He was definitely punished for a reason. Lovinger had found a fact democrats wanted buried and so they buried Lovinger.  Yet somehow Lovinger seems not to have had a Constitutional right to a security clearance. Former FBI counsel James Baker, who hired Halper, was found to be in contact with reporter David Corn in the fall of 2016. Halper was used to set up George Papadopoulos into a situation which the FBI was to bamboozle poor George into a perjury trap.

Brennan himself reacted by penning an editorial in the NY Times. In it, her presented all of the proof he had of Trump’s collusion with Russia.

The already challenging work of the American intelligence and law enforcement communities was made more difficult in late July 2016, however, when Mr. Trump, then a presidential candidate, publicly called upon Russia to find the missing emails of Mrs. Clinton. By issuing such a statement, Mr. Trump was not only encouraging a foreign nation to collect intelligence against a United States citizen, but also openly authorizing his followers to work with our primary global adversary against his political opponent.

It was obvious to anyone with half a brain that it was sarcasm. Scott Adams points out that Brennan was apparently unable to discern sarcasm when he heard it.

“So Brennan may have started one of the most important political witch hunts in history based on not recognizing a joke — and I’m not even making that up,” he said. “I feel fairly confident in saying that what I just said is literally true: that the head of the CIA has almost destroyed the United States because he didn’t understand that an obvious joke was a joke.”

Or perhaps he was desperate to find something to pin on Trump as he had nothing else.

Brennan then doubled down

Such a public clarion call certainly makes one wonder what Mr. Trump privately encouraged his advisers to do — and what they actually did — to win the election. While I had deep insight into Russian activities during the 2016 election, I now am aware — thanks to the reporting of an open and free press — of many more of the highly suspicious dalliances of some American citizens with people affiliated with the Russian intelligence services.

Mr. Trump’s claims of no collusion are, in a word, hogwash.

Innuendo. What he read in the press? That’s it? Brennan has nothing else.

And that means there is nothing.

It gets worse. Brennan has a long history of blatant dishonesty:

1) In 2011, Brennan, then the country’s chief counterterrorism adviser, had sworn to Congress that scores of drones strikes abroad had not killed a single noncombatant — at a time when both the president and the CIA were both receiving numerous reports of civilian collateral death.

2) In 2014, John Brennan, now as CIA director, lied emphatically that the CIA had not illegally accessed the computers of U.S. Senate staffers who were then exploring a CIA role in torturing detainees. Or as he told Andrea Mitchell: “As far as the allegations of the CIA hacking into Senate computers, nothing could be further from the truth. . . . We wouldn’t do that. I mean, that’s just beyond the, you know, the scope of reason in terms of what we do.” Brennan’s chronic deceptions drew the ire of a number of liberal senators, some of whom echoed the Washington Post’s call for his immediate resignation. After months of prevarications, but only upon release of the CIA inspector general’s report, Brennan apologized to the senators he had deceived.

3) Brennan, in May 2017, as an ex-CIA director, again almost certainly did not tell the truth to Congress when he testified in answer to Representative Trey Gowdy’s questions that he neither knew who had commissioned the Steele dossier nor had the CIA relied on its contents for any action. Yet both the retired National Security Agency director, Michael Rogers, and the former director of National Intelligence, James Clapper, have conceded that the Steele dossier — along with the knowledge that it was a Clinton-campaign-funded product — most certainly did help shape the Obama’s intelligence communality interagency assessments and actions, often under the urging of Brennan himself. There are also numerous reports that, despite his denials about knowledge of the dossier, Brennan served as a stealthy conduit to ensure that it was disseminated widely, at least in the sense of meeting in August 2016 with Senator Harry Reid to brief the senator about its unverified contents in hopes that he would pressure the FBI to further its investigations, which Reid did in a call two days later to James Comey.

Brennan himself makes clear Russia was making feeble efforts to interfere in the US election.

When I warned Mr. Bortnikov that Russian interference in our election was intolerable and would roil United States-Russia relations for many years, he denied Russian involvement in any election, in America or elsewhere, with a feigned sincerity that I had heard many times before.

And yet Brennan did nothing when Russian actions did not cease. He let it go on unchallenged. It wasn’t until after Hillary lost that obama even got woke. Then again, hillary wasn’t supposed to lose.

Director Brennan’s recent statements purport to know, as fact, that the Trump campaign colluded with a foreign power,” Burr said Thursday, questioning why, if Brennan’s assertion is based on actual intelligence, it was not included in the unclassified intelligence assessment released in early 2017.

“If his statement is based on intelligence he has seen since leaving office, it constitutes an intelligence breach. If he has some other personal knowledge of or evidence of collusion, it should be disclosed to the Special Counsel, not The New York Times,” Burr said. Burr added that Trump has the “full authority” to revoke security clearance if the statements were “purely political and based on conjecture.”

Brennan’s editorial was purely political and based entirely on conjecture.

We’re not done yet.

Stefan Halper, who helped entrap George Papadopoulos and tried to ensnare Carter Page, was a CIA asset acting as an FBI informant. How that came to be is something John Brennan needs to explain. Adam Lovinger was demoted for discovering it. The contact between Page and Halper first occurred in July of 2016 and went forward. It wasn’t until July 31 that Peter Strzok launched his infamous counter-intelligence operation on Trump. That means Brennan was spying on the Trump campaign and using an FBI informant before an operation was in place.

Hillary Clinton, the DNC and Barack Obama began pouring millions into Perkins Coie (which was then laundered into Fusion GPS) about two minutes after Trump’s foreign advisory team was named.

Then the Mysterious Mr. Mifsud appears.

Mifsud is the missing link in all this.  Mifsud contacted Papadopoulos on April 26, 2016 and fed George information about Hillary.

A court document filed by the special counsel says Mifsud told Papadopoulos in April 2016 that Russia had “dirt” on Hillary Clinton in the form of “thousands of emails.”

And then he vanished. I will bet money that John Brennan is involved in all of this. There is no question now that Brennan sent Halper to set up Page and Papadopoulos as a means of crippling Trump. Mifsud is the unknown card.

There was a conspiracy against Donald Trump. I’ve said it over and over and over. If there was anything to the Russian collusion nonsense Schiff, obama or Brennan would have leaked it long ago. Brennan just shot his load, and both barrels were empty.

Let’s be clear. It is suggested that Trump is trying to silence his critics. That is false.

What Trump is doing is stripping security clearances from those who conspired against him. Brennan is the first domino. There will be more. 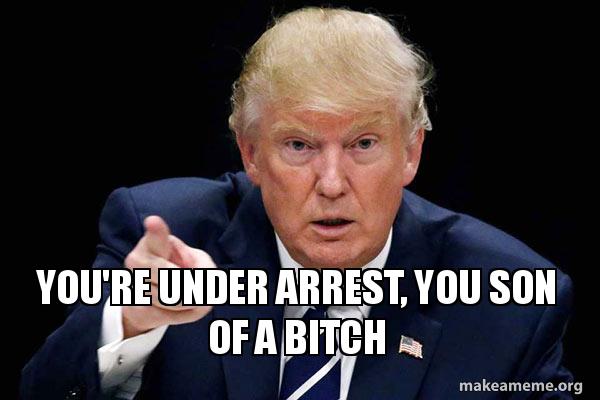