Did Christopher Steele work for a Russian oligarch AND Hillary? 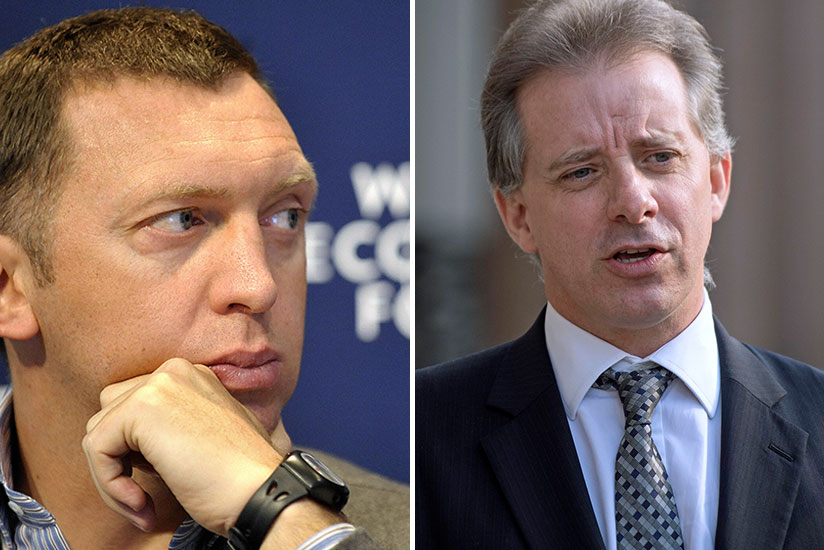 The information is coming, er, fast and furious over the last few days. That sound you hear, is the creaking of the roof over the heads of democrats.

Oleg Deripaska is a Russian oligarch who was banned from entering the US in 2006. He wanted to be able to re-enter the US. His advocate?

Emails in 2016 between former British spy Christopher Steele and Justice Department official Bruce Ohr suggest Steele was deeply concerned about the legal status of a Putin-linked Russian oligarch, and at times seemed to be advocating on the oligarch’s behalf, in the same time period Steele worked on collecting the Russia-related allegations against Donald Trump that came to be known as the Trump dossier. The emails show Steele and Ohr were in frequent contact, that they intermingled talk about Steele’s research and the oligarch’s affairs, and that Glenn Simpson, head of the dirt-digging group Fusion GPS that hired Steele to compile the dossier, was also part of the ongoing conversation.

The emails, given to Congress by the Justice Department, began on Jan . 12, 2016, when Steele sent Ohr a New Year’s greeting. Steele brought up the case of Russian aluminum magnate Oleg Deripaska (referred to in various emails as both OD and OVD), who was at the time seeking a visa to attend an Asia-Pacific Economic Cooperation meeting in the United States. Years earlier, the U.S. revoked Deripaska’s visa, reportedly on the basis of suspected involvement with Russian organized crime. Deripaska was close to Paul Manafort, the short-term Trump campaign chairman now on trial for financial crimes, and this year was sanctioned in the wake of Russian involvement in the 2016 presidential election.

A release last week of texts showed that Christopher Steele, the former British spy whose memos regarding the Trump campaign’s possible ties to Russia are referred to as the Steele dossier, reached out to Sen. Mark Warner, the ranking Democratic member of the Senate Intelligence Committee, through a Russian-linked Washington, D.C., lobbyist named Adam Waldman. Among Waldman’s clients is Oleg Deripaska, a Russian aluminum magnate with close ties to Russian President Vladimir Putin. In a text dated March 16, 2017, Waldman texted Warner, “Chris Steele asked me to call you.”

In 2009, Waldman filed papers with the Department of Justice under the Foreign Agents Registration Act (FARA) registering himself as an agent for Deripaska in order to provide “legal advice on issues involving his U.S. visa as well as commercial transactions” at a retainer of $40,000 a month. In 2010, Waldman additionally registered as an agent for Russian foreign minister Sergei Lavrov, “gathering information and providing advice and analysis as it relates to the U.S. policy towards the visa status of Oleg Deripaska,” including meetings with U.S. policymakers. Based on the information in his FARA filings, Waldman has received at least $2.36 million for his work with Deripaska.

Remember that Steele had been terminated in November 2016 as a source for the FBI for leaking to the press.

Then Steele wanted back in so he could hand information to Mueller. His contact?

“Whenever convenient, I would like a chat, there’s a lot going on and we are frustrated with how long this re-engagement with the Bureau and Mueller is taking,” Steele texted Associate Deputy Attorney General Bruce Ohr on Aug. 6, 2017. “Anything you could do to accelerate the process would be much appreciated.”

“Chris, good to hear from you,” Ohr texted back as he proposed times when the two could discuss the idea.

It was very curious

The exchange — one of several in which Steele proposed a return to the Russia probe — has captured the attention of investigators in Congress and the Department of Justice (DOJ). Some of them told me they are stunned that a top Rosenstein aide would even consider restoring Steele to the case, and with good reason.

After all, Steele was paid by a firm working for Hillary Clinton’s campaign and the Democratic National Committee (DNC) to dig up Russia dirt on Donald Trump. Then, in November 2016, he was deemed “not suitable” to serve as an FBI informer after being caught leaking information to the media.

Bruce Ohr was acting as a back channel between Simpson and Steele and the Comey/McCabe FBI. DAG Rod Rosenstein reportedly disavowed any knowledge of this.

Thus, at about the same time Steele was being paid by Hillary Clinton and the DNC to find dirt on candidate and then President Trump he was advocating for a Russian oligarch.

Was he being paid by the Russian at the same time?

It turns out that Steele had diddly for sources in Russia:

Yet, Simpson allegedly acknowledged that most of the information Fusion GPS and British intelligence operative Christopher Steele developed did not come from sources inside Moscow. “Much of the collection about the Trump campaign ties to Russia comes from a former Russian intelligence officer (? not entirely clear) who lives in the U.S.,” Ohr scribbled in his notes.

Steele and Simpson repeatedly fed false information to the FBI. First, Manafort was the spy. Then it was Carter Page. Then it was Gary Cohen.

Once you know that, you know how Mueller chose the road he took.

For example, Simpson told then-Associate Deputy Attorney General Bruce Ohr during the Dec. 10, 2016, meeting in a Washington coffee shop that he believed Trump’s longtime lawyer, Michael Cohen, was the “go-between from Russia to the Trump campaign.”

Then there was the Hail Mary. Simpson, wanting to assure Trump’s electoral failure, told Steele to divulge the contents of Steele’s unverified dossier to David Corn of Mother Jones. He knew no crime had been committed.

In his House testimony, though, he conceded not knowing if what he and Steele dug up amounted to a crime: “At the time that we — you know, that Chris decided to take this to the FBI, I wasn’t convinced of the facts of anything in terms of — I wasn’t convinced that there was a specific crime that occurred.”

It is all bullsh*t. It was all fabricated. It was a conspiracy to frame Trump.

If that’s not enough, there’s more. Mueller is quite familiar with Oleg Deripaska:

In 2009, when Mueller ran the FBI, the bureau asked Russian oligarch Oleg Deripaska to spend millions of his own dollars funding an FBI-supervised operation to rescue a retired FBI agent, Robert Levinson, captured in Iran while working for the CIA in 2007.

Yes, that’s the same Deripaska who has surfaced in Mueller’s current investigation and who was recently sanctioned by the Trump administration.

The Levinson mission is confirmed by more than a dozen participants inside and outside the FBI, including Deripaska, his lawyer, the Levinson family and a retired agent who supervised the case. Mueller was kept apprised of the operation, officials told me.

Some aspects of Deripaska’s help were chronicled in a 2016 book by reporter Barry Meier, but sources provide extensive new information about his role.

They said FBI agents courted Deripaska in 2009 in a series of secret hotel meetings in Paris; Vienna; Budapest, Hungary, and Washington. Agents persuaded the aluminum industry magnate to underwrite the mission. The Russian billionaire insisted the operation neither involve nor harm his homeland.

“We knew he was paying for his team helping us, and that probably ran into the millions,” a U.S. official involved in the operation confirmed.

Carter Page became the pigeon used by the FBI to spy on Trump. The FISA warrant states outright that Page met with Igor Sechin, another Russian oligarch. (P.15-16) Page has been interrogated by the FBI and he denies meeting with Sechin. As Page has not been charged with anything, it seems reasonable to presume that the source (an American) gave false information to Steele, who promptly added it to his dossier.

This is a sordid and shameful part of American history and it will be documented as such. It is the biggest conspiracy ever in this country. And the good news?

Subpoenas are on the way.

The Republican chairman of the House Judiciary Committee is readying subpoenas for people connected to the controversial “Steele” dossier, sources tell The Hill.

The subpoenas will also go after other current and former FBI and DOJ officials including Jim Baker, Sally Moyer, Jonathan Moffa and George Toscas, the sources said. Steele brought up the case of Russian aluminum magnate Oleg Deripaska (referred to in various emails as both OD and OVD), who was at the time seeking a visa to attend an Asia-Pacific Economic Cooperation meeting in the United States. Years earlier, the U.S. revoked Deripaska’s visa, reportedly on the basis of suspected involvement with Russian organized crime.

Well, obviously the intent was only to have his visa revoked during times when Oleg had no reason to want to come to the US. If he needed to come here to make more money, it’s just mean to keep him out.

Steele and Simpson repeatedly fed false information to the FBI.

To people that DESPERATELY wanted to believe it.

Indeed, this has been sedition from the beginning and Obama was involved by abusing his powers.