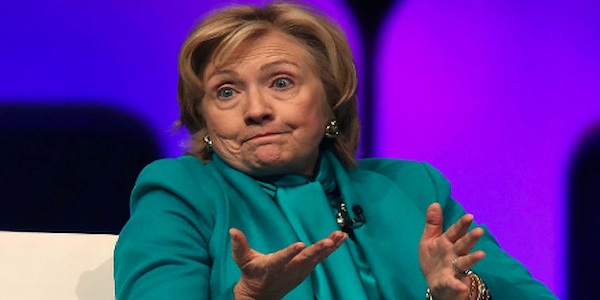 Christopher Wray had something pretty interesting to say at a conference today:

China, rather than Russia, is the “most significant” long-term threat to the United States, FBI Director Christopher Wray said Wednesday.

During an interview with NBC’s Lester Holt at the Aspen Ideas Forum, Wray said that the FBI has economic espionage investigations in all 50 states that trace back to Chinese activity.

“It covers everything from corn seeds in Iowa to wind turbines in Massachusetts and everything in between,” said Wray.

Most of the forum focused on the FBI’s investigation of Russia’s meddling in the 2016 presidential election and in other arenas. Wray’s appearance comes in the wake of two significant indictments in Russia-related investigations.

That brings us to something of critical importance that has been virtually ignored by the legacy media. All of Hillary Clinton’s missing emails went to a foreign entity.

A member of the House Committee on the Judiciary said during a hearing Thursday that a government watchdog found that nearly all of former Secretary of State Hillary Clinton’s emails were sent to a foreign entity and that the FBI didn’t follow-up on that finding.

The Intelligence Community Inspector General (ICIG) found an “anomaly on Hillary Clinton’s emails going through their private server, and when they had done the forensic analysis, they found that her emails, every single one except four, over 30,000, were going to an address that was not on the distribution list,” Republican Rep. Louie Gohmert of Texas said during a hearing with FBI official Peter Strzok.

“It was going to an unauthorized source that was a foreign entity unrelated to Russia,” he added.

Peter Strzok was informed of this and he did…….nothing.

Gohmert said the ICIG investigator, Frank Rucker, presented the findings to Strzok, but that the FBI official did not do anything with the information.

Strzok acknowledged meeting with Rucker, but said he did not recall the “specific content.”

“The forensic examination was done by the ICIG and they can document that,” Gohmert said, “but you were given that information and you did nothing with it.”

ICIG Chuck McCullough was scolded for doing his job:

In late 2017, ICIG Chuck McCullough — who was appointed by former President Barack Obama —  took the unusual step of coming forward publicly to say that he perceived pushback after he began raising the alarm about issues with Clinton’s servers to then-Director of National Intelligence James Clapper.

He said he found it “maddening” that Democrats, including Sen. Dianne Feinstein of California, were underselling the amount of classified information on the server.

McCullough said he “expected to be embraced and protected,” but was instead “chided” by someone on Capitol Hill for failing to consider the “political consequences” of his investigative findings, Fox News reported.

This is something of great significance. Today it is being reported that Hillary’s emails- chock full of classified information- went to the Chinese:

The Russians didn’t do it. The Chinese did, according to well-placed FBI sources.

And while Democratic lawmakers and the mainstream media prop up Russia as America’s boogeyman, it was the ironically Chinese who acquired Hillary’s treasure trove of classified and top secret intelligence from her home-brewed private server.

The FBI sat on this to maintain Clinton’s political viability.

This would normally blow up the Russian hacking story and be a yuge story but these aren’t normal times. It seems as though Barack Obama was flexible not only for the Russians, but for the Chinese as well.