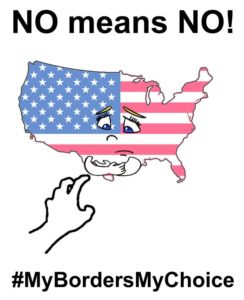 Welcome back everybody! You’d almost be able to blame the heat if our friends on The Radical Left weren’t so crazy all the time!

5/28 – She Persisted: Chelsea Clinton calls for anti-American protests abroad to Get Trump

How did we miss this piece of this story at the time? Apparently we can now add “Mother” to Politician, Lawyer, Diplomat, and Wife in the list of professions where Hillary has been a spectacular failure

In the coming months you’re probably going to hear a lot from Democrats about Corey “Confederate Flag” Stewart, because what else do they have to offer but anger and victimhood? This post helps to clarify things

6/21 – Survey: Most voters blame parents of separated kids, not the federal govt for current border crisis

Real voters out of step with coastal media? Gee. Who would’ve thought?

George Fwill is “Exhibit A” of the diminishing marginal return of education – at some point being overeducated makes you dumber. Fwill seems to want to slug it out with Bill Kristol for leadership of theVichy Conservatives

6/23 – Drunk rioters injure emergency doctor – This next number is goes out to FA Commenter Kitt!

If you’re wondering how this relates to Kitt, every week she posts a music video in the comments

The meme at this link (and at the top of this post) is another brilliant example of using jujitsu to throw The Radical Left’s logic back in their faces.

Apparently only Conservatives have the capacity for intelligence – finally something where we can all agree!

6/26 – SAMANTHA BEE WRITER: ‘CIVILITY IS A TOOL OF WHITE SUPREMACY’

I love when The Radical Left is honest about what low opinions they have of nonwhite people!

Best comment on the subject of this Sandernista’s primary win in New York came from Jim Geraghty’s Facebook page:

“Can’t I just celebrate — for one brief second — that there’s a Democrat somewhere, anywhere, that supports abolishing a federal agency?”

Remember who they’re united against.

In last week’s WIRL I posted an article from The Federalist referencing the Facebook “The Swamp” video series on Facebook. Over the next few weeks I’ll be posting each video. If you want to see how serious the problems in DC are as we approach Independence Day, you’ll want to watch these videos – Ep I – Meet the Troublemakers

ICYMI – I put two posts up this week. The several week postponement of looking at the Solo movie and how bad Star Wars movies in general have become finally went up on Thursday night. One of the reasons it kept getting postponed is that I didn’t want it getting buried under bigger breaking stories in the news cycle – like the rise in aggression from The Radical Left and my raising the question, Is it time to call for violence against Leftists?

I’m also planning on having one more post up before the 4th regarding the holiday and cultural appropriation – keep your eyes peeled!

From the archives, we have two pieces to help celebrate Independence Day this week. Even though they’re from a few years ago, The Radical Left manages to keep my posts relevant with their going-on-two-year hissy fit over losing an election:

First, The Bad News on Independence Day, as told through an Inspirational Star Trek Speech (1/2)

Reasons for Hope this Independence Day (2/2)

And remember kids, on the 4th of July don’t play with fireworks – leave that to the adults who’ve been drinking all day!

That's the number of paragraphs you have to read into this story before being informed this was the Obama-era (2015-2016).

That's the number of times Trump is mentioned.

That's the number of times Obama is mentioned. https://t.co/B4L7ArBEjk

I don't know if I can live in a country where public employee unions lose their rights to force people to give them money pic.twitter.com/uA5Uzm9Dpd

the bastard child chelsea is under the delusion that she will be the first female president-she does not know who her daddy is. shaub’s short run in office was marred with undisclosed sexual misconduct events in his office. he does not like woman

Thnx 4 the shout out Bob, This weeks selection goes out to all the Progressives, who think they own a court seat,

Sock it to me?

Apparently only Conservatives have the capacity for intelligence – finally something where we can all agree!

When most people (almost all people) study the history of slavery they focus only on blacks.
But lots of other people have been enslaved.
The history of Jewish slavery is interesting altho I have never seen it all put together in one book.
Just as blacks were enslaved for their strong backs, legs and passive personalities, so, too Jews were enslaved for their strong points.
Jews, helped build the pyramids, but many of those slaves were the bookkeepers, the archetects, in charge of pre-placement of men and materials, even the supervisors.
One famous Jewish slave in Egypt was Joseph, in charge of all the pharoah’s bookkeeping/wealth and planning.
Babylonian kings enslaved Jews and placed incredible responsibilities on some of them, like Daniel.
Later the Greeks then the Romans enslaved Jews and histories of their times show Jewish slaves were in charge of rich family’s financial planning/affairs.
The most recent enslavement of Jews was under feudal European times where, for instance, in pre-communist Russia, Jews were kept in each “lord/baron/prince & king’s” palace/manor for the purpose of keeping the books.

My point is that, for millenia, Jews have been selectively bred to be strong at math.
People who are bad at math might resent it.
(Dems are asking new wave dems like Alexandria Ocasio-Cortez, Thomas Lopez-Pierre, even Keith Ellison, how much anti-Semitism is acceptable?)
Aren’t anti-Semitic POC prejudiced against their fellow freed slaves? Just that Jews were bred and kept for a different role by their masters.
Shame on ’em!
They should work hard and apply themselves.
They can learn.

@kitt: Ha ha – not what I was expecting! On that vein:

@Nanny G: What in their recent history suggests that Leftists are capable of learning anything? =8^)