Trump did not tribalize politics. obama did. 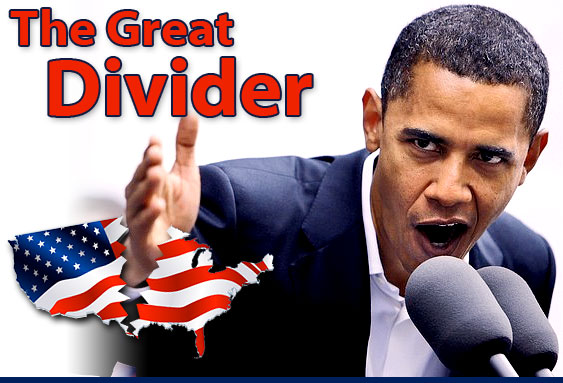 There is an expression that goes like this: “There are three kinds of people in the word. Those who make it happen, those who watch it happen and those who wonder what happened.” Count Axios.com in the last group. It posted this on Twitter this morning.

An odd paradox in defining this moment in politics: The more President Trump does, says and tweets outrageous things, the more his critics go bananas and the better he does in the polls. https://t.co/5hDoWLNuF2

A couple of things. Axios doesn’t get it at all. Trump is no Boy Scout. We knew that when we voted for him. But he is doing what we promised he’d do. The other thing they miss is that it wasn’t Trump who made politics tribal. obama did that.

WASHINGTON (AP) — More Americans feel Barack Obama’s presidency divided the country than feel it brought people together, a new poll shows. Yet he leaves office held in high esteem by a solid majority.

Eight years after Obama’s historic election, just 27 percent see the U.S. as more united as a result of his presidency, according to an Associated Press-NORC Center for Public Affairs Research poll conducted after the 2016 election. Far more — 44 percent — say it’s more divided.

:
7 Ways Obama Has Divided the Country

According to the Pew Research Center polling data, Republicans and Democrats are “more divided along ideological lines – and partisan antipathy is deeper and more extensive – than at any point in the last two decades.” After surveying 10,000 people, Pew found that people have grown far more ideologically inflexible. The number of Americans who express either consistently conservative or consistently liberal opinions has doubled over the past two decades from 10 percent to 21 percent.

2. Most Americans Believe Country is On The Wrong Track

As of January 11, 70 percent of American voters believe the country is heading in the wrong direction. This number has been consistent throughout Obama’s presidency, having hit a high of 81 percent in 2013.

3. Trust in Government is at an All-Time Low

For decades, the Gallup Organization has been asking Americans about how much they trust the federal government. In 1972, for example, the year of the Watergate break-in, a whopping 72 percent of Americans said they trusted the government “a fair amount or a great deal.” After eight years of Obama, that figure has plummeted to just 45 percent, the lowest its been since Gallup began asking the question.

Obama’s supporters point out that he inherited an economic disaster in the 2008-2009 credit wipeout. Yet despite the rhetoric, after eight years of his policies, Americans are worse off today than they were in 2008. Labor participation rates are at record lows. Because cost-of-living increases since the recession officially ended in 2009, real wages have actually declined for most U.S. workers.

At the funeral service for five slain Dallas cops, Barack Obama delivered another one of his needlessly politicized lectures. As is customary these days, those who were critical of his rhetoric were branded racists and unthinking haters.

Another one is that people might be put off by Obama’s grating habit of turning every tragedy into a sermon about our supposed collective failings. I doubt the president is substantively more partisan than the average politician, but like most people on the Left these days, he no longer bothers to make a distinction between a policy position and a moral struggle.

Seemingly every political battle waged by the modern Democratic Party — gay rights, immigration, climate change, inequality — is imbued with a kind spiritual certitude that justifies circumventing debate. If a person who opposes the administration’s transgender bathroom policy is just like a Klansman, why even discuss the matter? In this context, the histrionics of Democrats in Congress over guns or the media’s melodramas make all the sense in the world.

In this context, why wouldn’t the president lecture us about gun control in his speech? Why wouldn’t Obama offer completely unsubstantiated claims about guns? “It’s easier for a teenager to get his hands on a Glock than a computer … or even a book,” was a contention Obama made that no rational person could ever possibly believe. It’s meant to convey the idea that half the nation cares more about the NRA than about children.

So maybe some conservatives are put off by Obama’s awe-inspiring propensity to create strawmen and offer false choices at every opportunity — all under the guise of thoughtful discourse. Maybe it’s that he never offers a fair or reasonable assessment of his opposition’s positions before pretending to debunk them. Or maybe it’s that, no matter what actually happens, he clings to a predetermined message before blaming the half of America that didn’t vote for him.

Last week, the Dallas chief of police told us that the murderer of five cops, Micah Xavier Johnson, was “upset about the recent police shootings” and “wanted to kill white people, especially white officers.” In the same way, the Orlando shooter, Omar Mateen, was a Muslim motivated by ISIS to murder as many gay Americans as he could. Because neither of these storylines comport with the president’s worldview, in each instance he laid down collective responsibility and implored us to be more liberal and thus avoid more incidents like them. We are better than this.

As John Podhoretz recently put it:

It is also very useful to hark back to the tone obama set in his first term:

He called those who disagreed with him “hostage takers.”

Obama Engages in Class Warfare With His Campaign for Democratic Lawmakers

President Barack Obama is returning to the rhetorical roots of Democratic politics in the final weeks of this election: setting up a battle of the classes.

Presenting Democrats as the party that will fight for the “middle class,” and Republicans as the party that will look out for “millionaires and billionaires,” Obama in campaign speeches and at fundraisers has sought to make his point using a populist lexicon that aligns Republicans with big businesses as the forces behind the worst recession since the Great Depression.

The Republican National Committee Tuesday night accused President Obama of making “an appeal based on class warfare and race” after Obama outlined his party’s midterm strategy of returning people who voted for the first time in 2008 to the polls in November.

Obama, in a video released this week, spoke in the demographic terms more commonly — though very commonly — used by political consultants, saying Democrats must appeal to “young people, African-Americans, Latinos, and women who powered our victory in 2008 [to] stand together once again.”

Trump is successful. The polls say it all.

For the first time since President Donald Trump took office, the CNBC All-America Economic Survey shows more than half the public approving his handling of the economy, and it appears to be having some impact on his overall job approval rating.

The president’s economic approval rating surged 6 points to 51 percent with just 36 percent of the public disapproving, a 6 point drop from the March Survey.

His overall approving rating rose 2 points to 41 percent from the first quarter survey, but the percentage of Americans who disapprove dropped 10 points to 47 percent, the lowest recorded by CNBC during his presidency. Trump’s approval rating remains negative, at minus 6, but it’s also the lowest negative rating recorded since he took office.

The survey suggests that the recent controversy over the president’s decision to separate children from their parents at the border has had little effect either way.

obama made politics in this country more tribal than ever. Trump is smart enough to take advantage of it.