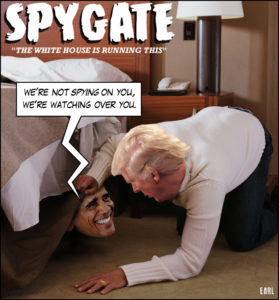 It’s now unofficially summertime, but the insanity of The Radical Left never goes on holiday!

Weird question, but can anyone here think of a comparable example happening on the other side? Obviously nothing on this scale but… anything?

5/26 – Oh, the Irony! Hogg Beclowned Himself With His Publix Stunt. [VIDEO]

There is something genuinely heartwarming about watching The Radical Left step on their own collective d***s.

Great video by Candace Owens for Prager U.

Intelligently using Leftist stupidity against them? Who are these people, and what have they done with our RNC?

I’m at a rare loss for words on this one.

This is one of those rare pieces that has me saying “I want to write like this some day when I grow up”. You’ll enjoy every minute of reading the whole thing, but here’s a taste:

Once you removed your pussy hat after attending the Women’s March, you made fun of Kellyanne Conway’s hair, Sarah Sanders’ weight, Melania Trump’s shoes, Hope Hicks’ death stare; you helped fuel a rumor started by a bottom-feeding author that U.N. Ambassador Nikki Haley slept with Donald Trump. You thought it was A-OK that Betsy DeVos was nearly physically assaulted and routinely heckled.

Sanders is a national treasure, and the Republican Press Secretary this country has needed for a long time

Comparing President Trump to Bin Laden. Thank you Democrats, for another ad in the #HowYouGotTrump campaign.

On a programming note, starting with this week these posts are going to get somewhat shorter. You might have noticed that last week I finally published two posts that were my first non-Week in Leftism posts in nearly six months. Yes, it’s been almost half a year! Anyway, I want to put more energy into those so I’ll be putting in a little bit less here. Don’t worry, the roundups aren’t going away though! And for that matter a lot of the weekend links I pull are from from The Pirate’s Cove’s “Sorta Blogless Sunday” posts. If you tune in to my weekly summary a pingback from The Pirates Cove generally appears early Sunday afternoon. I’ve been meaning to give the site’s curator, William Teach, props for his links for a while, so now is as good a time as any. “But Brother Bob”, you might be saying, “Where is your new post for this week?” Fair question. I had hoped to get a piece published last night, but since it’s probably the most incendiary piece I’ve written yet, I want to choose every word carefully. Expect to see something Sunday or Monday night.

From the archives, with school years wrapping up we go back almost four years to Two Seemingly Unrelated Stories that Explain the DC School System.

On a lighter side, here’s a great story from The babylon Bee: Movement That Demands Forceful Silencing Of All Opposing Viewpoints Unsure Why Nation So Divided

Don't tell me you care about children being ripped away from their parents if you didn't care about it four years ago. https://t.co/tjXFr8w9AP

Are white women the target du jour of the social justice mob because white men stopped giving a fuck? Because it kinda feels like that to me. https://t.co/qkSNiDceUp

Let's face it, supporting the free speech rights of people you disagree with has become a fringe political position