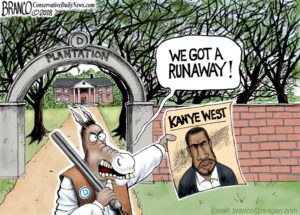 4/9 – Looking for ‘solutions’ to mass killings? Start with punishing failure.

Since punishing failure means accepting responsibility there’s no way we’ll get The Radical Left on board with this one.

This is why it’s to hard to take The Radical Left seriously. One would think that when their ideas fail they’d be angriest at the ones who prove them to be so wrong. WHich is why instead they just get angrier at Conservatives.

5/11 – SHOCKER! 2 of ‘Big 3’ evening newscasts took a pass on this BIG Trump-related story

In all fairness, they were only the leaders of some JV team.

Lovett is right to worry that Steyer’s ad may hurt Democrats. The ad may do so because it pulls back the curtain on the attitude of the left towards those who disagree with them. To the extent the left views being Republican as a deadly personal failing or mental illness, Americans can easily imagine the measures it would advance to cure the “problem.”

As much as I like good news like this as much as the next Conservative, I think it would be foolish for the GOP to ignore how much money the various Soros/Steyer, etc. groups have been dumping into the local & state elections. Which means they’re probably ignoring it.

The story includes an embedded video from Mark Dice. If you haven’t heard of him you’ll want to check his YouTube channel, where every weekday he releases a new vid giving the Radical Left the mockery they so richly deserve!

I haven’t really read Wizbang since my old inspiration to become a blogger, Jay Tea, left (you can look him up in the archives), but this has some great analysis of how The Radical Left is going on offense and playing the long game. Our side needs to pay attention and learn.

As much as it pains me to link to The New York Times, it’s probably the most constructive piece I’ve seen directed at The Radical Left. See below in the tweet roundup for Iowahawk’s take on the article!

The Other McCain gives a great short look at modern Feminism and where its ideology’s endgame is leading.

Yes, Republicans (no Conservatives!) have been just as guilty, but this article contains some good reference links for any of your holier-than-thou Leftist pals suddenly discovering fiscal responsibility

More good news. A better step would be to vet potentially redundant programs before they launch, but this is a start

It’s hard to pick who to root for to lose in this – the politicians who don’t know the basic math of any number multiplied by zero equals zero, or these SJW corporations that get to the progressivism they love to force onto us normals shoved down their throats?

…And we’re in the final stage of any failed Leftist policy – when an idea has failed so completely that you can’t BS people any more, lie as to whose fault it is

I’m still no huge fan of Kanye, but will always be grateful for his exposing the racism of so many Democrats

For this week’s throwback, with the Euroweenies up in arms over our pulling out of the Iran fleecing deal and recognizing Israel’s capitol, seven years ago I called on the international community to start paying their fair share of taxes in A Call for Higher Taxes Part II

And finally, this isn’t new but let’s close out with a happy story about how a Toronto Restaurant Shocks Vegans Protesting Meat

I've never seen a town try harder to destroy its economy than Seattle.https://t.co/p8T1cw8Lxx

You want us to rob the Iranian treasury?! That's insane! Crazy! Suicidal!

Leader of @hamasinfo Yahya Sinwar told a crowd, "I'm afraid to die in bed and wish myself to die as a martyr during the 'March of Return' protests."

Once again we don't normally take requests but we can definitely pencil you in for this Monday.

You have a great chance to beat Trump
"What's the catch?"
You have to temporarily stop being smug obnoxious assholes
"Hard pass"https://t.co/zSScm5QDnj

[…] the USSA News store! Click this link for the original source of this article. Author: Brother […]

Giving Human Rights to Rivers and Streams dose that mean tearing down all the dams because they violate the rights of a river? HOW STUPID ARE THEY?

This weeks selection is dedicated to all liberal taxed areas In order to pay for pensions they will destroy jobs, home values and anything else that would cause a feeling of safety or security. Putting an extra tax on your house for long unfunded pensions, is the latest genius trap.
https://www.youtube.com/watch?v=7idnA_aUXXE
Just leave your stupid voting habits behind.

4/9 – Looking for ‘solutions’ to mass killings? Start with punishing failure.

The left doesn’t want a solution until they have gotten all the political usage out of these tragedies they can get. The solution is changing the culture that believes killing innocent people is an acceptable attention getting device.

Why does the left fear free speech and transparency so much. Oh…. that’s right.

The left has tried to turn all laws into political weapons, at which point they cease to be laws. Now, in this case, there are no laws, just weapons to use to achieve a political or vengeful end. Yeah, nice work, liberals.

5/11 – SHOCKER! 2 of ‘Big 3’ evening newscasts took a pass on this BIG Trump-related story

I’ve often said that the cure for liberalism is a healthy dose of liberalism. In the crybaby rantings of butt-hurt liberals, many are beginning to see what a threat to society they really are and realizing how the liberal media lies on a consistent basis. This is good.

Maybe a better message to mothers and parents in general is that they keep an eye on their children and notice if they are planning a massacre, instead of always expecting the government, who usually fails miserably, to do it?

If liberals had any character, they would be embarrassing themselves beyond comprehension. That they aren’t speaks volumes.

Remember when liberals rose up in loud protest when Obama’s EPA ruined the Animas River? Yeah, me neither. Their goal is more control of thought and actions than protecting anything. Often they do this through redefining terms and items to suit their needs.

Liberals count on their constituents to ignorantly accept anything they are told as fact. Mostly, they are correct to assume this.

Normal is in the eye of the beholder and the more that consider this to be normal and that to be abnormal get to decide what is normal. What the left tries to do is to convince the majority of normal that they are somehow bigoted by considering the rare and abnormal as rare and abnormal.

Liberals were for deficits before they were against them, then they were for it again.

Government waste is how politicians pay off their supporters. Keep an eye on those who oppose this.

Liberals loves them some higher taxes…. except when they have to pay them.

Kenye is not my idea of an ideal spokesperson for anything, but the influence he has had on some black voters’ views of Trump proves my point that if more media icons would step up and denounce the culture of violence, abuse of women and irresponsibility we would make great strides in solving many of societies problems. Alas, they would rather rake in their millions and blame Republicans.

Why is “affordable housing” so unaffordable? One reason is that, as usual, it’s also kickbacks to a variety of special interest groups. If you want incentives for building affordable housing, you have to pay union wages.

Wait… isn’t that what all the illegal immigrants the left lures across our borders are for? Yet another liberal success story; homelessness AND taxes out of control.

@Deplorable Me: And of course, Leftists never explain the gap between America being a horrible place that everyone from around the world should be allowed to migrate to

@Brother Bob: Well, the horrible place part is their project.