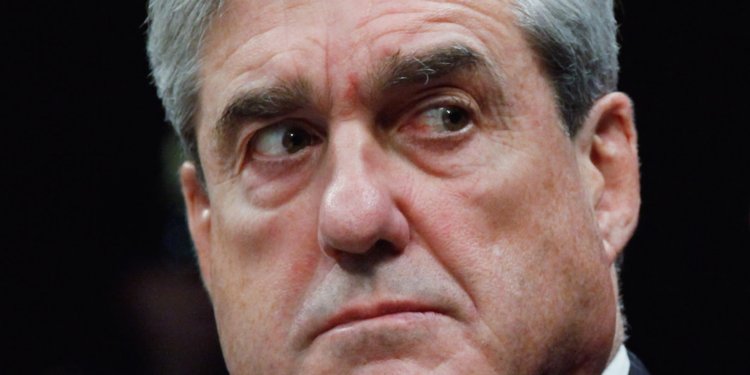 It’s hard to figure how many times I have heard people say what a great guy Robert Mueller is.  The BBC calls him “incorruptible.” Lindsay Graham thinks he’s the perfect guy for the job. He may be a good prosecutor, but the fact is he is a miserable pr*ck.

Mueller has populated his team almost uniformly with democrats:

Mueller’s key team member has a dubious past:

Yet Mueller tapped a different sort of prosecutor to lead his investigation — his long-time friend and former counsel, Andrew Weissmann. He is not just a “tough” prosecutor. Time after time, courts have reversed Weissmann’s most touted “victories” for his tactics. This is hardly the stuff of a hero in the law.

Weissmann, as deputy and later director of the Enron Task Force, destroyed the venerable accounting firm of Arthur Andersen LLP and its 85,000 jobs worldwide — only to be reversed several years later by a unanimous Supreme Court.

Next, Weissmann creatively criminalized a business transaction between Merrill Lynch and Enron. Four Merrill executives went to prison for as long as a year. Weissmann’s team made sure they did not even get bail pending their appeals, even though the charges Weissmann concocted, like those against Andersen, were literally unprecedented.

Weissmann’s prosecution devastated the lives and families of the Merrill executives, causing enormous defense costs, unimaginable stress and torturous prison time. The 5th Circuit Court of Appeals reversed the mass of the case.

Weissmann quietly resigned from the Enron Task Force just as the judge in the Enron Broadband prosecution began excoriating Weissmann’s team and the press began catching on to Weissmann’s modus operandi.

Mueller knows this history. Is this why he tapped Weissmann to target Paul Manafort?

Newsweek says Mueller is a “hothead” who can’t own up to his mistakes.

Mueller was also criticized for his time as head of the FBI. He led the investigation into the deadly anthrax attacks in the years after 9/11 for nearly seven years, ultimately leading in the prosecution of the wrong suspect, who later successfully sued the government for $5.8 million.

After agents successfully traced back the anthrax to an Army microbiologist who committed suicide once he was informed of the impending charges, Mueller “was reluctant to publicly address the missteps” in the case.

Comey and Mueller worked together to botch that case.

Comey and Mueller are best friends, which should have disqualified Mueller from the get go. Mueller almost certainly took the assignment in part to seek vindication for his pal and Rosenstein knows it. The population of Mueller’s team betrays his bias.

But worst of all, Mueller has no problem destroying innocent people in his Sherman’s March to the sea.

“God damn you to hell”

Michael Caputo was a Trump campaign aide. He was facing financial ruin for nothing:

Following the Senate meeting, Caputo passionately criticized the panel, charging that the probe has cost him $125,000 and is forcing him to move from the Buffalo area in order to pay off legal bills.
“Your investigation and others into the allegations of Trump campaign collusion with Russia are costing my family a great deal of money — more than $125,000 — and making a visceral impact on my children,” Caputo said in a prepared statement that he delivered at the end of the Senate interview, which was provided to CNN.
“Forget about all the death threats against my family. I want to know who cost us so much money, who crushed our kids, who forced us out of our home, all because you lost an election,” he added, concluding with, “I want to know because God Damn you to Hell.”
Caputo and other Trump associates have hired attorneys to deal with the various Russia investigations in Congress and by special counsel Mueller, often at a high price tag.

Caputo had the same answer for all the questions:

Caputo, who worked for the Trump campaign in late 2015 and early 2016, said the staffers questioned him about 20 or so people associated with the campaign. He said the investigators asked him if he aware if any of those people had any contacts with Russia during the campaign.

“My answer for each of them was the same,” Caputo said. “There was none.”

Then we have Michael Flynn. Flynn was interviewed in January 2017 by FBI agents who did not think he was lying.  The interview triggered by Sally Yates, using the Logan Act as the ruse to snare Flynn. Flynn was reportedly exonerated of any wrongdoing in an article from January 23, 2017:

An FBI review of communications between Russia’s ambassador to the U.S. and President Trump’s national security adviser did not produce any incriminating evidence, The Washington Post reported Monday night.

The revelation comes one day after the The Wall Street Journal reported that Michael Flynn’s communications with Russian officials had been investigated by U.S. counterintelligence agents. The FBI review focused on calls Flynn made to Russian Ambassador Sergey Kislyak on Dec. 29, the same day the Obama administration imposed fresh sanctions on Russia over what U.S. intelligence says was its hacking of Democratic organizations and individuals with the intention of helping Donald Trump win the presidential election.

The very next day Yates sicced the FBI on Flynn to entrap him and he would fall prey to Mueller, who would go on to do his best to bankrupt Flynn, who was forced to sell his house to meet lofty legal bills. Flynn is also said to have pleaded guilty to protect his son, whom Mueller threatened to indict.

Caputo said that Mueller has answers to all the questions he asking witnesses. That means Mueller is simply trying to lure more people into perjury traps, as he did Flynn and Papdopoulos. It means that his desired interview with Trump is also a perjury trap. It also suggests Mueller has squat vis-a-vis collusion. Remember- Mueller wasn’t appointed because of evidence of any crime. He was appointed to go out and find a crime.

It’s gotten so bad that now two judges are putting the brakes on Mueller’s steamroller.

Robert Mueller is not a good man. He is a damned pr*ck.