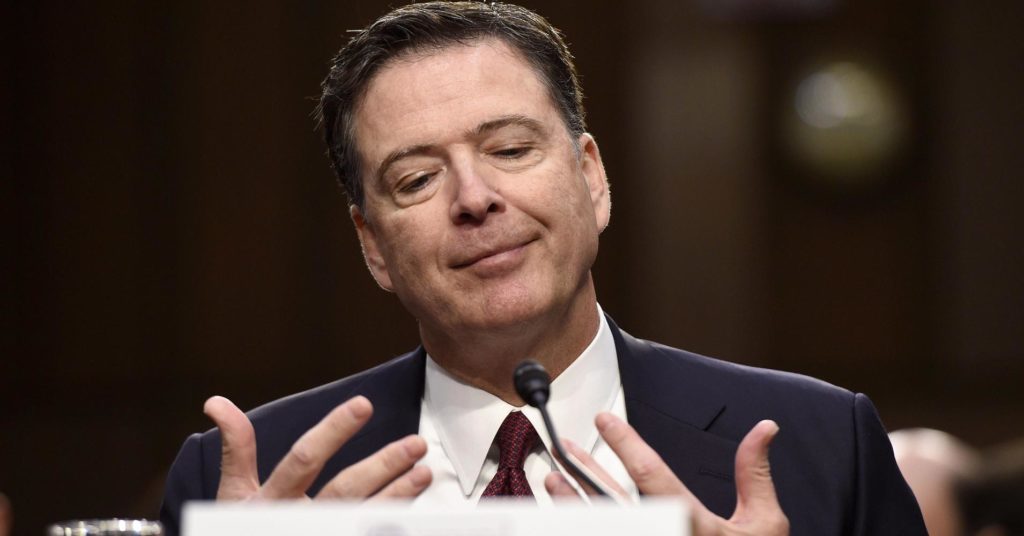 James Comey lives in a world of his own rules. The more you listen to him, the worse he gets. Hubris doesn’t begin to describe him. Comey testified under oath that he never leaked information nor did he approve of a leak.

That’s just not true, but in Comeyworld the rules are different. You see, he believes he  didn’t “leak”, he just communicated substance:

“First, I didn’t leak memos. I asked a friend to communicate the substance … one unclassified memo to the media, and I was a private citizen.”

“I think of a leak as an unauthorized disclosure of classified information,” Comey added.

And here’s where even CNN gasps.

“That’s how I thought of it as FBI director,” Comey said. “We investigated leaks. Unauthorized disclosures. The bottom line is, I see no credible claim by any serious person that that violates the law.”

It’s how he thought about it that matters, not what the law or ethics say. How Comey thinks about things is the key here. He denied being a leaker and yet admitted being the leaker:

“President’s tweeted innumerable times calling you a leaker — because of that. First of all, what’s your response to President Trump?” Stephanopoulos asked.

Comey acknowledged being a leaker, saying, “Look, it’s true, I mean, I’m the one who testified about it, that’s how people know about it, that I gave that unclassified — this is a whole other conversation about whether you can leak unclassified information, I don’t want to get involved in that.”

“I see no credible claim by any serious person that that violates the law.”

“Although there is evidence of potential violations regarding the handling of classified information, our judgment is that no reasonable prosecutor would bring such a case,”

Four of the seven memos Comey wrote have been classified as “classified or secret.” That means Comey did leak classified information.

But hey, he says, he was a private citizen and in his judgment this information needed to get out. Comey testified that he gave them to a “friend” who was to leak them to the press. Once again, he testimony was misleading. That “friend” was a special government employee, security clearance and all.

Then that could mean it was Richman who leaked classified information. He also seems to have played a significant role in exonerating Hillary Clinton in her email scandal.

Someone violated the law:

FBI policy forbids any agent from releasing classified information or any information from ongoing investigations or sensitive operations without prior written permission, and it mandates that all records created during official duties are considered to be government property.

“Unauthorized disclosure, misuse, or negligent handling of information contained in the files, electronic or paper, of the FBI or which I may acquire as an employee of the FBI could impair national security, place human life in jeopardy, result in the denial of due process, prevent the FBI from effectively discharging its responsibilities, or violate federal law,” states the agreement all FBI agents sign.

“All information acquired by me in connection with my official duties with the FBI and all official material to which I have access remain the property of the United States of America. I will surrender upon demand by the FBI, or upon my separation from the FBI, all materials containing FBI information in my possession.”

The FBI Employment Agreement was last revised in 2015 under Comey, so he can hardly claim ignorance. Comey may also shared the memos with Patrick Fitzgerald.

Comey allows himself all kinds of leeway and floats above the problem of ethics.

In his interview with Anderson Cooper, Comey denies the existence of a “deep state.” Instead, he calls it a “deep culture.”  Then it went like this:

“When we say the deep state is trying to destroy president Trump,” Cooper pressed one more time. “You are saying point blank that is not true?”

Which is in conflict with his motive:

“I didn’t do it myself for a variety of reasons, but asked him to, because I thought that it might prompt the appointment of a Special Counsel.”

That is, so he can destroy Trump.

Comey finds justification in everything he does, as though he is the only righteous man in America. Corey Lewandowski says Comey has a massive messiah complex. He’s right. A regular Comeydian.

And let’s remember this:

Comey let hillary dictate her email investigation. There really isn’t any question about what’s been going on.