Comey kept his finger on the scales: his selective ability to discern intent 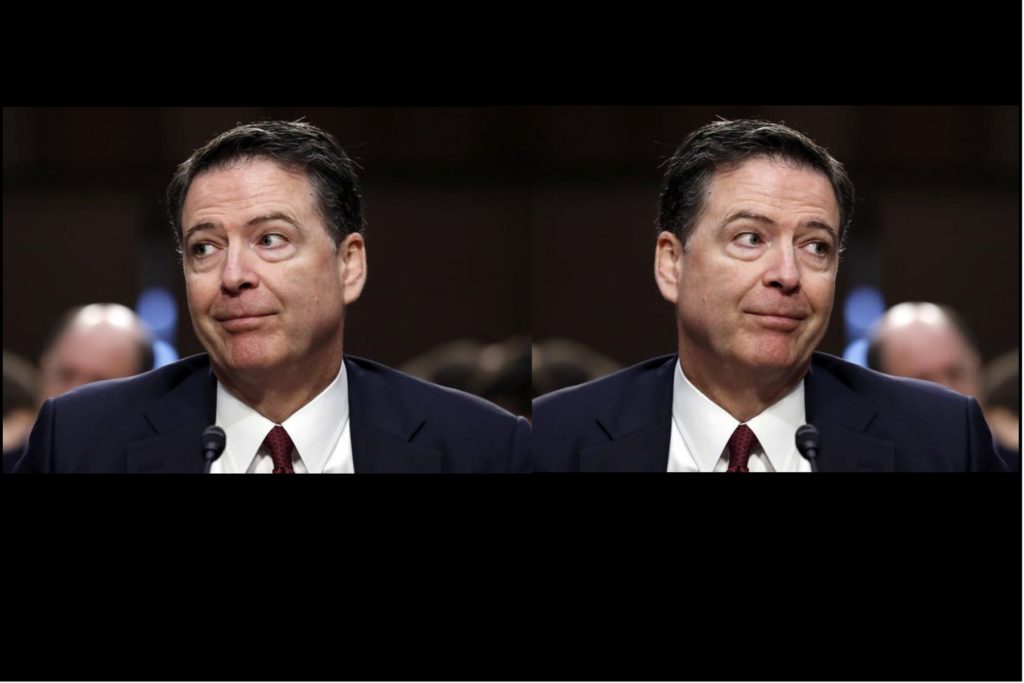 Yesterday I wrote about how Comey would not use or reveal “unverified information” that would have been detrimental to Hillary Clinton and Loretta Lynch but that he had no qualms about using unverified information to secure a FISA warrant to spy on Donald Trump. Today we have another beauty.

Prosecution under 18 USC 793 only requires that the information wind up being outside of its proper place of custody. You can argue the intent angle all the live long day but it doesn’t change the fact that the law clearly appears to have been broken. Whether the Justice Department (under the thumb of one of Clinton’s biggest campaign surrogates) decides to do anything about it is another question.

Trey Gowdy had pretty much destroyed Comey on the issue of intent (All of it matters):

Gowdy: Good morning, Director Comey. Secretary Clinton said she never sent or received any classified information over her private e-mail, was that true?

Comey: Our investigation found that there was classified information sent.

Gowdy: It was not true?

Comey: That’s what I said.

Gowdy: OK. Well, I’m looking for a shorter answer so you and I are not here quite as long. Secretary Clinton said there was nothing marked classified on her e-mails sent or received. Was that true?

Comey: That’s not true. There were a small number of portion markings on I think three of the documents.

Gowdy: Secretary Clinton said “I did not e-mail any classified information to anyone on my e-mail there was no classified material.” That is true?

Comey: There was classified information emailed.

Gowdy: Secretary Clinton used one device, was that true?

Comey: She used multiple devices during the four years of her term as Secretary of State.

Gowdy: Secretary Clinton said all work related emails were returned to the State Department. Was that true?

Comey: No. We found work related email, thousands, that were not returned.

Gowdy: Secretary Clinton said neither she or anyone else deleted work related emails from her personal account.

Comey: That’s a harder one to answer. We found traces of work related emails in — on devices or in space. Whether they were deleted or when a server was changed out something happened to them, there’s no doubt that the work related emails that were removed electronically from the email system.

Gowdy: Well, in the interest of time and because I have a plane to catch tomorrow afternoon, I’m not going to go through any more of the false statements but I am going to ask you to put on your old hat. Faults exculpatory statements are used for what?

Comey: Well, either for a substantive prosecution or evidence of intent in a criminal prosecution.

Comey: That is right?

Gowdy: Consciousness of guilt and intent? In your old job you would prove intent as you referenced by showing the jury evidence of a complex scheme that was designed for the very purpose of concealing the public record and you would be arguing in addition to concealment the destruction that you and i just talked about or certainly the failure to preserve.

Two days ago, Director, you said a reasonable person in her position should have known a private email was no place to send and receive classified information. You’re right. An average person does know not to do that.

This is no average person. This is a former First Lady, a former United States senator, and a former Secretary of State that the president now contends is the most competent, qualified person to be president since Jefferson. He didn’t say that in ’08 but says it now.

She affirmatively rejected efforts to give her a state.gov account, kept the private emails for almost two years and only turned them over to Congress because we found out she had a private email account.

So you have a rogue email system set up before she took the oath of office, thousands of what we now know to be classified emails, some of which were classified at the time. One of her more frequent email comrades was hacked and you don’t know whether or not she was.

And this scheme took place over a long period of time and resulted in the destruction of public records and yet you say there is insufficient evidence of intent. You say she was extremely careless, but not intentionally so.

You and I both know intent is really difficult to prove. Very rarely do defendants announce ‘On this date I intend to break this criminal code section. Just to put everyone on notice, I am going to break the law on this date.’

It never happens that way. You have to do it with circumstantial evidence or if you’re Congress and you realize how difficult it is prove, specific intent, you will form lathe a statute that allows for gross negligence.

My time is out but this is really important. You mentioned there’s no precedent for criminal prosecution. My fear is there still isn’t. There’s nothing to keep a future Secretary of State or President from this exact same email scheme or their staff.

And my real fear is this, what the chairman touched upon, this double track justice system that is rightly or wrongly perceived in this country. That if you are a private in the Army and email yourself classified information you will be kicked out. But if you are Hillary Clinton, and you seek a promotion to Commander in Chief, you will not be. So what I hope you can do today is help the average person, the reasonable person you made reference to, the reasonable person understand why she appears to be treated differently than the rest of us would be. With that I would yield back.

As a blind person could see, Clinton lied repeatedly and this pretty much proves intent. Despite all of the prevarications, Comey and Strzok decided that Clinton did not intend to do what she did.

In his interview with Clinton hack George Stephanopoulos, Comey suggested that Trump “possibly” may have committed obstruction of justice:

In an interview with ABC aired Sunday night, Comey said he isn’t the investigator or prosecutor on the case, but Trump’s request to let the investigation into Flynn “go” could be a crime.

“Possibly. I mean, it’s certainly some evidence of obstruction of justice,” Comey said.

You might recall the exchange between Sen. James Risch and Comey during Comey’s testimony before the Senate last year:

According to Comey’s notes, Trump told him, “I hope you can see your way clear to letting this go, to letting Flynn go. He is a good guy.  I hope you can let this go.” Comey attempted to push this prompt as an “order” or “command” from POTUS; although he goes on to say he did not follow it.

Sen. Risch immediately saw this display on Comey’s part for what it was, and proceeded to grill Comey on the matter: “Do you know of any case where a person has been charged for obstruction of justice, or for that matter any other criminal offense where they said or thought they hoped for an outcome?” Risch asked.

Comey immediately back-tracked: “I don’t know well enough to answer, and the reason I keep saying his words is, I took it as a direction. I mean this is the president of the United States with me alone saying ‘I hope this,’ I took it as this is what he wants me to do.”

Catching Comey in the act, Sen. Risch clarified: “You may have taken it as a direction but that’s not what he said.”

Risch: “He said, ‘I hope.’ You don’t know of anyone that’s ever been charged for hoping something. Is that a fair statement?”

You may also recall Comey “I don’t think it’s for me to say”  whether Trump obstructed justice.

It’s painfully obvious that whenever there was a doubt, Comey tipped the scales in favor of Clinton and against Trump. You will remember that Comey had exonerated Clinton long before the FBI interviewed her. Expect this pattern to continue.

Adam Schiff said both Obama and Comey made a mistake in assuming Clinton would win.

“The Obama administration didn’t aggressively take on the Russians while their hacking and duping was going on, while the social media campaign was going on because, in part, I think they felt like Comey — that Hillary Clinton was likely to win and that it would feed into Trump’s argument that they were rigging the process. I think the Obama administration and James Comey made a similar mistake.”

Comey said in an interview with ABC, set to air in full later on Sunday, that part of his thinking when deciding to reopen the Clinton email investigation was influenced by polling showing she would likely win the election.

Comey continues to be inclined to spread false information:

Which led Martha MacCallum to say what we’re all thinking:

Comey says he did not want to be political, yet so far every decision appears based on the assumption that he expected her to win. Why was that assumption a factor in anything?

I look forward to the release of all the Comey memos, which Trey Gowdy has called Trump’s “Defense Exhibit A.”

Comey obviously hates Trump, but does not hold Clinton in the same contempt. His hatred of Trump affected his job. Comey assumed Clinton would win. He wanted her to win. The FBI’s actions were all about that. I can’t get past this statement from Comey:

“I honestly never thought these words would come out of my mouth, but I don’t know whether the current president of the United States was with prostitutes peeing on each other in Moscow in 2013,” Comey said in a “20/20” episode set to air Sunday. “It’s possible, but I don’t know.”

Is it fair to say “I honestly never thought these words would come out of my mouth, but I don’t know if Comey was bought and owned by the Clinton campaign and used the FBI to do whatever it could to help her avoid legal jeopardy and forever compromise the Bureau in doing so. It’s possible, but I don’t know”?

Did I mention that Mrs. Comey desperately wanted Clinton to win? Can’t imagine that had any effect.

Anyone else notice that all Clinton witnesses got immunity and all Trump witnesses get fried?

Gowdy: You mentioned there’s no precedent for criminal prosecution. My fear is there still isn’t. There’s nothing to keep a future Secretary of State or President from this exact same email scheme or their staff.

This is prevented 50% of the time; whenever there is a Republican Secretary of State, this activity would be prosecuted.

Despite all of the prevarications, Comey and Strzok decided that Clinton did not intend to do what she did.

No. Wrong. The decided she DID intend to do what she did but they had to cover it up.

In an interview with ABC aired Sunday night, Comey said he isn’t the investigator or prosecutor on the case, but Trump’s request to let the investigation into Flynn “go” could be a crime.

“Possibly. I mean, it’s certainly some evidence of obstruction of justice,” Comey said.

Those who interviewed General Flynn said they didn’t think he lied. I guess that would rule out INTENT to lie as well, wouldn’t it?

Did I mention that Mrs. Comey desperately wanted Clinton to win? Can’t imagine that had any effect.

It probably made her get really nit-picky with the laundry and vacuuming Comey had to do when he wasn’t protecting Hillary.

Only a blind person cannot see the bias and injustice and only an idiot would believe the sighted CAN’T see it and deny it.