Well, apparently Trump declared “mission accomplished” today after the U.S. and its allies hit at least three chemical and biological weapons facilities in Syria with more than 120 missiles in a coordinated pre-dawn attack:

The military officials said they were confident that Syrian government installations that produced chlorine gas and sarin, a nerve agent, were destroyed or damaged.

The Pentagon said it knew of no civilian casualties “at this time.”

Wasn’t the objective achieved? Sounds like “mission accomplished” to me. What am I missing here?!

Trump’s declaration of “mission accomplished” had an awkward historic ring. It famously was on a backdrop banner when President George W. Bush stood on the deck of an aircraft carrier in May 2003 and prematurely declared victory in Iraq. The U.S. war there dragged on for eight more years.

You mean it’s over now?! And has been since 2011? Or has there been a series of phases to the Iraq situation? Which happens still be ongoing, with U.S. military presence still there, today? 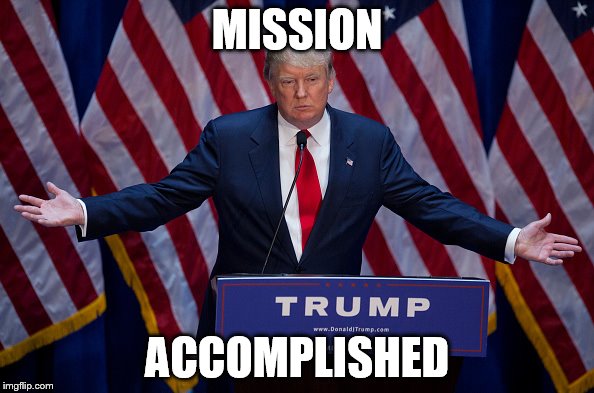 So “Mission Accomplished” is a dangerous boast, as President George W. Bush learned after declaring, in 2003, under a banner on a U.S. aircraft carrier, that all combat operations had concluded in Iraq. American forces remained in Iraq another eight years, more than four thousand Americans died, and, even after its withdrawal, in 2011, the United States had to return, in 2014, to help confront isis. Today we’re still there.

Ah…so they wish to tie Trump’s short military operation and objective to Bush’s OIF invasion? Thanks to a tweet from Trump 45? He’s either trolling them or too much of a knucklehead to know (or care) that “mission accomplished” is ammo for liberal-leaning media. 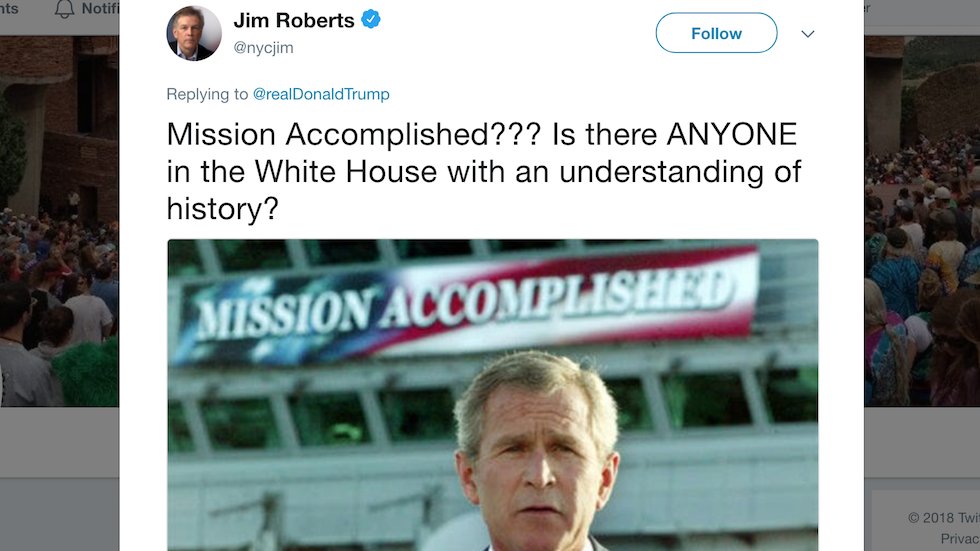 Probably the former. “Mission accomplished” has become part of our political vernacular. Like kicking over an ant hill, media articles are ridiculing the Trump tweet and predictably have reawakened their BDS instincts.

What Bush actually did say in the substance of his speech:

“We have difficult work to do in Iraq.”

“The transition from dictatorship to democracy will take time,”

“The battle of Iraq is one victory in a war on terror ….and still goes on.”

” We do not know the day of final victory,”

The mission to remove Saddam from power (regime change became U.S. policy under Clinton 42) was accomplished with relative ease. After that was a new phase/chapter – post-war operations, insurgency, civil war, troop surge and Sunni Awakening, SoFA pullout, Arab Spring and Syrian Civil War bringing AQI back to life through ISIS, back into Iraq. And defeated again. Story in Iraq is still a work in progress.

As for Syria, Assad, Putin, etc…..where does this leave us now, post-“mission accomplished”? What’s the next mission?

I don’t think liberals know what a mission is. Furthermore, since they support wasted spaces like Obama they aren’t really sure what an accomplishment is.

What’s next for Syria?
I think our president made that clear.
IF Assad uses chemical or banned weapons on his own people again, we will go in and do what we just did:
take out the research and storage spots for such weapons as well as the means for delivering them.