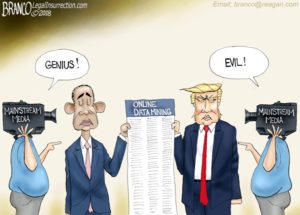 Welcome back everybody! A busy week means a short post this week, so I’ll try to curate the best of the craziest! First, a few quick ones from what Michael Loftus has dubbed “The Run For Our Lives March”:

I could be wrong, but I thought I had seen this one previously. Even if it’s not from the march it’s still a brilliant sign!

Hey Lefties, the next time you ask how Conservatives could support some shallow narcissist in The White House maybe you could ask the same of yourselves?

When even Van Jones is calling out your hysterics…

The Other McCain writes a great piece dispelling a myth that many of us Conservatives (myself included) have repeated regarding where gun violence is taking place. Unlike our Lefty counterparts, I’d rather have the facts on my side than a convenient and false talking point.

To the credit of Sanders, Moore, and Fauxcahontas, they are authorities on the damaging effects of worthless people having too much money

Be sure to read to the end! If I tried the same stunt and was questioned I’d simply respond, “Hey Baby, take a walk on the wild side.”

3/29 – Every Word Liberals Say About Guns Is A Lie

Another great piece from Kurt Schlichter:

Uh, what op-ed? No one wants to repeal the Second Amendment. Seriously, no one wants to take your guns. There’s nothing behind the curtain. Are you going to believe your own lying eyes and ears?

Yeah, we are. You know, if liberals propose to gaslight us, to make us think we are insane for seeing what we are looking at, then they really need to be more … subtle. But subtlety is not a big thing with the Teen Titans of Tyranny. You know, there’s a limit to how long you can tolerate having a pack of moppet puppets and their Twitter troll teammates telling you that YOU HAVE THE BLOOD OF CHILDREN ON YOUR HANDS!

[Spoiler: You don’t have blood on your hands].

I couldn’t agree more with this article. I’m all for Conservatives using some of the dirty tactics that The Radical Left’s been using on us for years, but I draw the line at lying – isn’t the reason we follow our philosophy because the facts and reality are on our side?

Besides, isn’t the optic of a girl with a Cuban  flag patch on her arm demanding that we surrender freedom to put more faith in government optics enough?

Curse those sexist Democrats for trying to silence a powerful woman! It’s not coming from our side, because we Conservatives hope that she never stops talking!

Happy Easter everybody! He is risen – and building hot rods!