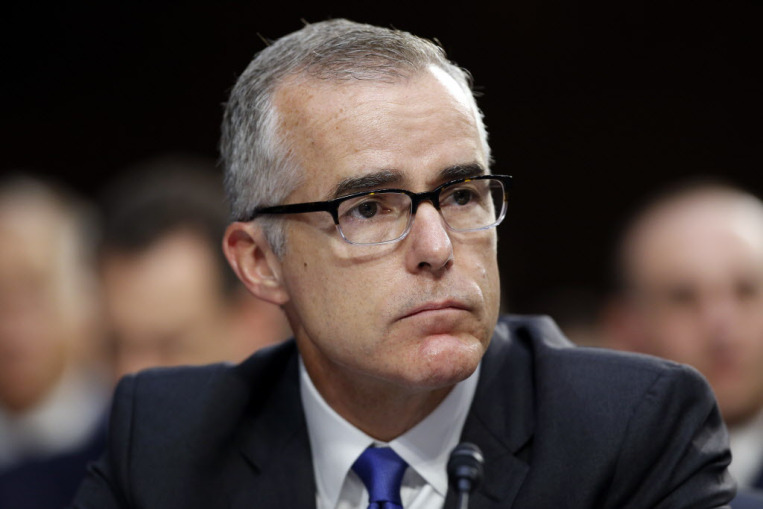 The termination of Andrew McCabe has the left wing in an absolute emotional mess.

Mr. Contempt of Congress wailed about the cruelty:

Analyze McCabe firing on two levels: the substance and the timing. We don’t know enough about the substance yet. The timing appears cruel and a cave that compromised DOJ independence to please an increasingly erratic President who should’ve played no role here. This is dangerous

More whining from a drama queen

Presidential historian Douglas Brinkley dramatically likened the firing of McCabe to the “Saturday Night Massacre” during the Nixon administration.

“This’ll be known as the ‘Friday Night Slaughter,’” Brinkley told CNN. “The very idea that Jeff Sessions hasn’t released something to inform the public of what this is, it was done in sort of a cloak of secrecy late at night, bizarre fashion. The fact that he was about to have his pension and they couldn’t let it go.”

Gloat now, but you will be fired soon. And it’s not going to be done cowardly, as you’ve done to so many who’ve served you. There’s a storm gathering, Mr. President, and it’s going to wipe out you and your corrupt organization all the way down to the studs. https://t.co/I0UlNAlwxI

Different possible motivations may be ascribed to these distraught outbursts. Either they’re crass and dishonest or they are ignorant, because like it or not, here are the facts:

The firing, however, was based on the recommendation of a career FBI official under current FBI Director Chris Wray and was justified because the FBI has a zero tolerance for lying under oath. In fact, there are many examples of the rank and file in the FBI losing their jobs and retirement benefits for violating these high standards.

If a different standard is applied at the most senior levels, the FBI is lost. So while this is a sad day, the action taken demonstrates that the dedicated men and women of the FBI will accept no lower standards, regardless of your rank or status.

Make no mistake, this was not a political decision forced by President Trump or any external party. The recommendation to fire McCabe came from the FBI’s own Office of Professional Responsibility, led by FBI Assistant Director Candice Will, who has been in her position since her appointment by then-Director Robert Mueller in 2004.

In other words this was the FBI itself recommending to the attorney general that – based on well- established precedent – one of their own should be fired for not meeting the high standards of integrity expected of an FBI employee.

The bottom line is, as Assistant Director Will has stated, “if you lie you are gone.” So far from being a political decision, this is the FBI sending a strong and consistent message to its agents and support staff.

And thus when I read this accusation from my home state Senator Dick Blumenthal I shake my head:

“McCabe firing is an undisguised attack on Special Counsel investigation – attempting to undermine him as a witness,” Blumenthal said on Twitter.

Blumenthal, as the others above, is either a liar or an idiot. It is amusing how democrats rush to support someone who has tarnished the FBI brand- an accusation not from Trump, not from Sessions, not from the GOP, but instead comes directly from the career officials at the FBI and the DOJ appointed by Obama and Mueller.

This was handed down from the IG and OPR offices even before the IG report was released, they felt it to be so important.

IMO McCabe was put in place to do what he did.

Before the election I said McCabe should have recused himself from anything to do with the Clinton’s or Trump. He didn’t. But then, Trump was never supposed to win and had he not won we would know none of this. This action is a good one- it begins the process of restoring faith in the FBI.

It is amusing how democrats rush to support someone who has tarnished the FBI brand- an accusation not from Trump, not from Sessions, not from the GOP, but instead comes directly from the career officials at the FBI and the DOJ appointed by Obama and Mueller.

The left went into sky-screaming fits because She Who Was Pre-Ordained lost a sure-thing election. This resulted in yanking the curtain from a massive abuse of power being perpetrated by “the most scandal free administration in history”. Nothing could have been more medicinal to cure an ailing Republic.

Now that the first ax has fallen on their little deep-state sewer team, they are apoplectic. The unimaginable is happening; not only was the march to socialist utopia halted (perhaps briefly delayed) but now the entire apparatus that was designed to assure the power of the government is used to protect and promote the leftist agenda is at dire risk, putting the road to socialism in jeopardy.

They won’t give up peacefully.

@Deplorable Me: You can see this with every thing Greg posts here. Greg Gutfeld described a liberal plan as 1. Make a statement, 2. Ah well, ah. Liberals never have a comprehensive plan to do anything even turning the US into a socialist country because they lack the ability to recognize unintended consequences of their actions. Name a plan the left has implemented that has actually succeeded. How about the war on poverty? Obama Care? The removal of nuclear threats from Iran and Korea? This is just a few. I am headed to a Spring Training Game in the Cactus League or I would list many more. How about some help?

Dems are going on and on about stealing McCabe’s “retirement” from him by firing him before he was eligible.
BUT, usually Dems say multimillionaires “have enough money.”
McCabe is worth $11 Million with a wife who has a million dollar/year income!
The couple have 2 homes, four luxury cars, retirement income bringing in over $50,000 interest/year.
https://finapp.co.in/andrew-mccabe-net-worth/

The (Dem snowflake) ladies doth protest too much, methinks.

@Nanny G: I think it just moves his retirement from age 50 to age 57. He still gets it just a bit later.

Name a plan the left has implemented that has actually succeeded.

That all depends on what they mean to accomplish. Obama was either the most incompetent President in history or he set out to destroy the strength of the United States and damn near almost succeeded.

@Nanny G: Mainly, the Democrats simply want to hate on anything they can blame on Trump. First, they stupidly blame McCabe’s firing on Trump, then they stupidly characterize it as wrong and bad.

@Mully: Unless he’s in jail.

We are NOT going to educate the liberals on anything. They are more sophisticated, worldly…our betters. Their opinion of us exactly mirrors what Hillary spouts. They use every crisis to chip away rights, their “fixes” only make things worse but they blame others and demand more money to throw at the same failed ideas. They are perfectly programmed real solutions are not allowed.

I will believe the cabal will be broken only when someone high enough up is looking at serious prison time and talks to save their own skin. Without a grand jury and enforceable indictments, I’m afraid this will just lead to “more investigations” and “blue ribbon committees” meeting at some resort.

@Bookdoc: The Republicans need to grow a set and prosecute, they are so worried about this multi millionaire losing partial government benefits.
https://finapp.co.in/andrew-mccabe-net-worth/

@kitt: @Bookdoc: Just look at how nuts the left goes when one of their useful idiots get rooted out. By the time they get to Lisa Page, the left will be totally out of commission and wrapped up in straitjackets!

@Deplorable Me: I noticed Greg didn’t post on this thread!

@Randy: I don’t know why. He never has a problem contradicting indisputable facts put right before his eyes. It doesn’t bother him one bit to promote the party line.

@Deplorable Me: Shame on you the PC name for straight jackets is “huggy-me coats” lord only knows how Greg types.

You’d better make sure that you have the ‘facts’ before trying to educate others!
Candice Will is not the head of opr!

You are correct, but it changes nothing else. It means that two obama appointees recommended McCabe’s termination.