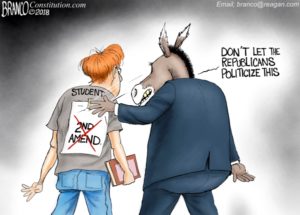 Happy Saturday everybody! Lots of crazy to get to, so let’s jump right in starting with a few from last week:

I’m in the minority on this, but I would have liked the portraits had the Obamas done normal adult portraits for their official ones and used these for some other purpose. On the plus side, now that the precedent has been set for tacky, unprofessional portraits I can’t wait to see what Obama’s successor does when his time comes! Maybe something in the style of the man who survived Macho Grande?

Rodrigo Duterte also said the communists are easier to hit than birds because they have bigger heads.

His latest crass remarks, which the government issued to reporters yesterday, came after human rights groups condemned him this week for saying troops should shoot female communist guerrillas in the genitals to render them “useless”.

I’m just going to let Ace sum up this one: (and it’s worth the click to read all of Ace’s comments)

No offense, but if women think that striving to achieve the impossible and add immeasurably to the sum of human knowledge and wealth is “patriarchal,” then:

1, It’s little wonder they make, allegedly 77 cents on each “male” dollar, and

2, 77 cents seems way too generous. Perhaps they’re being overpaid just because of their sex.

I’m going to psychically contact the Outer Planes and see if I can glimpse your future:

When you die alone, with your sixteen cats, even your cats will just shrug and quickly move on to find a more attractive woman to ignore.

Only five? I thought that the anti-2nd Amendment crowd hated all of them

Abigail, don’t you think I know what you’ve done? Abigail…

Remember, only government employees have the intelligence and morality to handle firearms.

2/24 – Germany: Muslim migrant thanks “Mama Merkel” for being able to practice polygamy on benefits

As the saying goes, you can have open borders or a welfare state, but not both.

Link to a great infographic

I reject the premise of this particular post – Its title suggests that Leftist adults are any more sane or rational.

Spoiler: it belongs in the Fiction section of libraries and book stores

This week’s edition of “Your best sexism/ racism / any-ism comes from The Left!”

2/26 – WATCH: Leftist Students Freak Out When Panel Agrees Men And Women Are Different

Whatever you may think of Democrats, one has to admire their tenacity. Between last week’s story about their Democratic-controlled Supreme Court declaring itself a legislative body and now this it’s a good thing that the GOP establishment is dedicated to fighting… our president!

Where have we heard this before? Ah, yes – I suggested three years ago that The Westboro Baptist Church could finally make a useful contribution to society! I now see the flaw in my logic – we restrict it to those b**tards? There’s no reason that us Normals can’t get in on the fun of tormenting The Radical Left

Fact check: True. By “us”, our former President Obama means Democrats. And it’s impossible to feel embarrassment when you’re incapable of feeling shame.

2/27 – Dems Worry: Are We Overplaying The Gun-Control Hand?

I am shocked! Shocked I say!

I have a suggestion for Comedy Central – scrap The Daily Show and just run clips of CNN.  They’re funnier than anything you can write and cost a lot less!

I know that this is a rhetorical question, but shouldn’t the people who hate those of us who don’t share their blind faith in the benevolent genius of Big Government be the first ones wanting to show off how efficient and ethical their God truly is?

Yes, keeping citizens armed against a potentially repressive government is Anti-Semitic. It’s a good thing there are no historical examples that see any problems with this!

I’ll never be able to confirm this because of his then inability to speak, but back when Little Bob was Baby Bob I’m pretty sure that Elsa was his first celebrity crush. Yep, even back then he he had the sense to pick up on some potential hot girl on girl action – that’s MY BOY!!!

All kidding aside, (copulate) off, Hollywood – can you please at least wait until our kids approach adolescence before you try to indoctrinate them?

I’m happy to have a reasoned, respectful convo about why joining the fight isn’t the right thing to do philosophically.

But at the outset, I need to hear you admit, “yes, I’m okay with the left using corporations to strangle any viewpoint but the left’s in the political space.”

When you're thinking about what the school bus is going to be like Monday morning pic.twitter.com/enmmfu9t0C