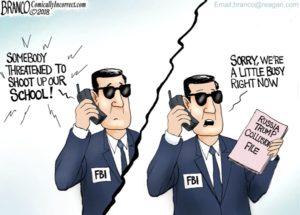 After last week’s quick post we have one of our busiest weeks ever for insanity from our friends in the Radical Left! But first, one from the previous week (H/T Flopping Aces commenter “Bill… Deplorable Me”):

And going back a bit further…

As you can tell from the date this post was written in the aftermath of Las Vegas, and it’s still no less relevant today. I know that most Lefties have completely lost it since last week’s shooting, but if you know any who’ve held some shred of sanity they’ll hopefully appreciate this.

I can’t confirm if this is real or not, but I’ve learned to never misunderestimate the insanity of our Lefty pals

This week’s edition of “Whenever my Lefty pals wonder why a “Small l” Libertarian like me is so vehemently opposed to gay marriage it’s because I knew it wouldn’t end there. And that’s the problem with the Radical Left’s various grievance mongering identity groups – they always have to find a new grievance to intrude in our lives in order to justify their existence.”

Or in a broader stroke, Leftists can’t stand anyone who doesn’t follow their rigid theology

For anyone who thinks that Leftists can be brought to see reason with a smack of some cold, hard reality, you can give up hope now. This incident took place in the deep blue DC suburb of Montgomery County.

Of course, this article pays tribute to the great Fox Butterfield!

2/17 – Hijabs More Stylish in London Than in Middle East

Of course the irony is lost on the people who’ve been shrieking for more laws while they’ve spent the last year cheerleading the FBI trying to stage a coup instead of doing, you know, their jobs.

There is really nothing I can add to this one.

Putting aside any of my grievances I’ve had and still have w/ Romney, apart from the bit about immigration I thought it was a pretty good ad. Am I off on this? Let me know in the comments!

Yes, I posted this for the headline alone but the story itself is still worth the click.

“Better to be king for a night than schmuck for a lifetime.”

Of course, this kind of weapons grade stupidity would come from the former news source known as Newsweek! See the tweet roundup below for some follow up

I’m reminded of a line from the greatest movie ever made – “The use of unnecessary force in the apprehension of the Blues Brothers… has been approved.”

This isn’t the most glamorous story in this post, but probably the most important. If you only click on one story this week, please take five minutes to read this one.

Government price controls vs. free markets – take a guess which one works?

I’m not as concerned with this as I used to be. Very simply, this is just a case of one culture that no longer believes in itself being supplanted by one that does.

2/20 – State Sen. Foreman to ‘Safe Sex’ Lobbyists: ‘Abortion Is Murder … What You Guys Do Stinks’

If you want something to put a smile on your face, read this story!

Cool! I can’t wait for the inevitable “Pro-Gang Rape” billboards that will eventually follow!

There’s nothing in this post that will surprise you, but it’s a good story to bookmark as reference

2/23 – Teachers Protest: #ArmMeWith Anything But Guns

Great. Now we have people who don’t even understand the basic term of what it means to be armed teaching our kids. But thanks for the free advertisement for School Choice!

Closing out this week’s stories, from those masters of clean humor over at The Babylon Bee: Thoughts, Prayers Prove Ineffective At Preventing Neil DeGrasse Tyson From Saying Moronic Things On Twitter

And finally, one from the archives. This week we’ve had some silly talk about lowering the voting age as the youngsters we’ve seen on TV and marching in protests show why that would be a bad idea. I’m feeling mightily prescient because four years ago I asked if it was time to raise the voting age!

I don’t even know what would make Russia think they could meddle in our elections. Obama told them to knock it off and everything

Let's say you were an authoritarian & wanted to weaken American democracy. How'd you do it? 1) ban free speech 2) disarm the country 3) undermine families and churches 4) Empower unelected bureaucrats. Trump isn't doing that. The ruling class is #Tucker @FoxNews

If you work for a large company and have a problem with morale, you simply need to load your entire HR department into a helicopter and forcibly disembark them from about 300 feet up.

FBI would've spent more time acting on the lead about the Florida mass murderer if the tipster warned he was a Russian troll bot.

Studies suggest that mass shooters thrive on media attention. To deprive them of that oxygen, @realDailyWire will no longer publish the names or photographs of mass shooters.