It wasn’t the collusion that started the investigation, it was concern that someone really had her emails

The story we’ve all been handed from the democrats is that the investigation into Trump is about collusion with Russia. There is not a shred of evidence to support that contention but that hasn’t stopped democrats from repeating it. But what if that’s only a cover story?

One of the early targets of the Russia accusation is Carter Page. Page is frequently called an idiot, but he is anything but and idiot:

Page graduated in 1993 from the United States Naval Academy; he was a Distinguished Graduate (top 10% of his class) and was chosen for the Navy’s Trident Scholar program, which gives selected officers the opportunity for independent academic research and study.[10][11][12] During his senior year at the Naval Academy, he worked as a researcher for the House Armed Services Committee.[13] He served in the Navy for five years, including a tour in western Morocco as an intelligence officer for a United Nations peacekeeping mission.[13] In 1994, he completed a master of arts degree in National Security Studies at Georgetown University.[13

His efforts for Donald Trump have resulted in a non-stop colonoscopy for Page. He has been accused of being a spy. ABC said that the Russians tried to recruit him- unsuccessfully- but that hasn’t stopped media outlets from asserting that he ‘was recruited” by Russia.

I had a discussion with a liberal who insisted that Page was a Russian agent but called it ‘capitalism” when Bill Clinton visited Putin’s home and walked away with $500,000 the next day, but that’s how discussions with liberals go.

The thing is, Page has been under surveillance by US intelligence agencies since 2014. That obviously has netted nothing as Page remains a free man untouched by the Mueller probe. Without a doubt, the obama regime knows everything Page knows.

Michael Flynn is another victim, making the mistake of getting paid $45,000 for a speech in Moscow. That’s nothing more than crumbs in contrast to Bill Clinton’s haul. “He sat next to Putin!” screamed liberals, ignoring the fact that Jill Stein sat at the same table. 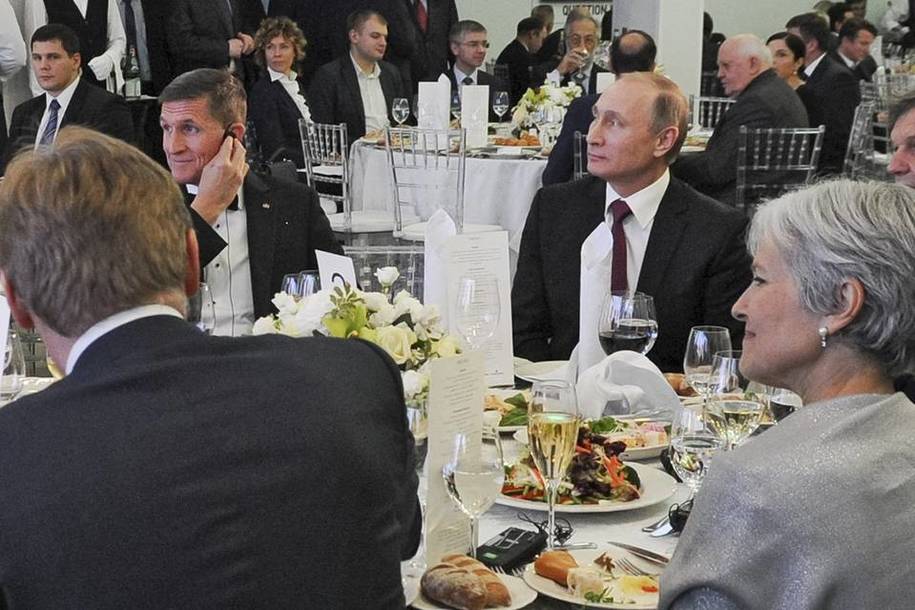 Flynn got caught in a stupid process crime, having been lured into a perjury trap by Andrew McCabe and Peter Strzok. He had no chance.

All we heard about Trump was “Russia, Russia, Russia” and liberals reminded of the existence of the “dossier” at every opportunity. As its fatal flaws are revealed, the game plan is switching- to someone no one had ever heard about not long ago.

In April of 2016 Papadopoulos met with one Joseph Mifsud, a Maltese academic who claimed that the Russians had ‘”thousands of emails” relating to Hillary Clinton.’ About three weeks later, Papadopoulos slams down a few at a London wine house and brags to Australia’s top diplomat Alexander Downer that Russia had political dirt on Hillary Clinton. Nothing happened immediately, but then

The possibility of Clinton’s emails being in the hands of the Russians, and then possibly being transmitted into the Trump campaign was the lynch pin for the investigation.

So why is this important? The timing. What has happening at this very time?

The Clinton email scandal “investigation.” As we now know, the FBI Clinton email investigation was a sham. It was not conducted in a serious manner. James Comey had already decided Hillary Clinton was innocent long before her interview.

The Judiciary Committee reviewed transcripts, which were heavily redacted, indicating Comey began drafting the exoneration statement in April or May 2016, before the FBI interviewed up to 17 key witnesses, including Clinton and some of her close aides.

April or May. Right around the time Papadopoulos was shooting his mouth off.

It is no wonder the FBI jumped on this. If the Russians did indeed have Clinton’s missing emails and they got into the hands of the Trump campaign it could have absolutely blown up Comey’s so-called investigation.

The FBI affidavit implies Mifsud may have been “played” by the Russians.

Poor George got caught in another process crime. And Mifsud has disappeared.

The Russian investigation didn’t being as collusion. It began as a feverish effort to protect Hillary and Comey. It evolved into accusations of collusion as a canard. And despite concrete proof that the Clinton campaign and the DNC paid a foreign agent for false dirt from the Kremlin on a candidate for President of the US the word “collusion” never seems to apply.

Carter Page worked with the FBI to catch Russian spies. He became the fall guy when the FBi decided that Trump wasn’t going to become President.

Ha. As soon as it was know Hillary had a secret, private, unsecured email server almost everyone with a brain assumed the Russians had dipped into Hillary’s little convenience store of State Department classified information. Is anyone that speaks this fact of life out loud subject to FBI investigation and FISA wiretaps?

Over 1 year of gathering info on Carter Page but NOTHING charged against him at all.

OTOH, Evan McMullin was a spy, did sell arms to al Qaeda and the Taliban, but, he opposed Trump to the extent he ran for president in Utah and 10 other states to try to rob Trump of some Electoral College votes!
Nothing has ever been charged against him!
McMullin is a globalist Republican, a GOPe.
As such he’d have rather seen fellow globalist Hillary win over “America-First, anti-globalist, Donald Trump.

The globalists leading the intel upper echelons always act in a way to further the “new world order,” (globalism) and always oppose nationalists who put their own countries first.

Carter Page wasn’t who Hillary & co were after, he was the means of getting info on Trump and his inner circle.
He had been cooperating with the FBI for years before the FISA warrants.
Obama/Hillary/Lynch/et al., were already listening in to the Trump people, the FISA warrants (for Page) gave them the legal cover to expose anything bad they collected, which was nada.

What is a “perjury trap”?

@Michael: They have recorded conversations, then grill you you best remember out of what may be hours or several phone conversations what you said or boom you are accused of lying to the FBI.

0
Reply
It wasn’t the collusion that started the investigation, it was concern that someone really had her emails – Socialism is not the Answer

@Michael: Asking Hillary anything under oath. She’ll lie every time, but of course, unlike Republicans she has no concerns about being prosecuted. Not even when she lied, under oath, before Congress, on VIDEO which the entire nation has seen, is she held accountable. That is the trap that is never tripped.

@kitt:
As far as I know the FBI does not record interviews with targets. They use a 302(?) form to take down notes.

How very convenient. If I were to be interviewed by them I would have my own recorder there and if not allowed to use it, would not be talking to those treasonous, seditious, bastards.

One needs to be fearful of process crimes- which is what they nailed Flynn and Papadopouolos for. They did nothing illegal but they lied about it- probably after being intimidated about their contacts.

The FBI could ask Trump if he had a one Big Mac or two on July 16, 2017 and he might answer only one and they could produce a receipt showing he actually bought two and they’d indict him for lying to the FBI. See how it works?

@Miriam: Not the recorded interviews the recorded telephone conversations with the Russian ambassador, after they were invited to leave by Obama. Flynn was contacted by him and thats the recording they used.
Never speak to FBI with out the benefit of attorney, Flynn did, being unaware of the trap, he was newly appointed and wished to cooperate with his FBI “brothers”.

Entirely plausible. Remember that the whole “Russia” narrative took off because of Trump’s snarky quip: “Maybe the Russian’s have Hillary’s missing emails.”

@Hank: A pretty good joke which the Democrats had to pretend not to get since they were pretending Hillary didn’t seriously abuse her responsibilities as Secretary of State by dishing up a heaping helping of classified information for anyone that was interested to enjoy. Which, of course, she actually did.

IF Carter Page is an “ideologue” which ideals does he agree with?
Who has he aligned with?
Well, UPDATE:
On a 2008 listing of speakers to be heard at the “Bard Globalization and International Affairs Program in New York City,” Carter Page claimed to be an Clinton insider:

Carter Page previously worked with the Clinton Administration transition team in 1992-1993 while serving as a Research Fellow on the House Armed Services Committee (HASC) on Capitol Hill. During his Fellowship, HASC Chairman Les Aspin was selected by President Clinton as the Secretary of Defense in December 1992. From May 1993 – December 1994, Carter went on to serve as the Arms Control Action Officer for Counterproliferation Policy in the Nuclear Affairs and International Negotiations Branch of the Navy Staff in the Pentagon.

What if Carter Page were an agent of the Clinton Machine, who “volunteered” with the Trump transition team in order to implicate Trump in the plot that began the morning after the 2016 election, when the excuse of “Russian interference” was first cooked up by Hillary’s advisors. That can’t be ruled out.

Others have started to wonder about this:
Clarice Feldman
Thomas Lifson

I have some questions about that too

@Nanny G: @DrJohn: Regardless, there is NO real evidence of anyone associated with Trump OR Trump colluding with the Russians.