Comey was after Trump from the beginning 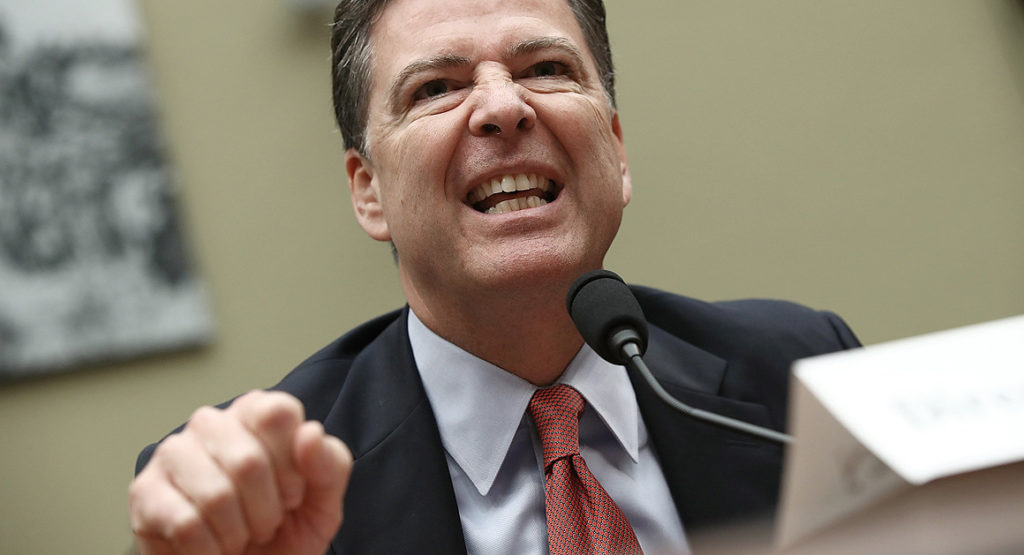 There has been a boatload of discussion about the Nunes memo, but there is a lot more which needs explaining. It looks to me that James Comey set Trump up.

Among Comey’s prepared remarks prior to his testimony:

“I first met then-President-Elect Trump on Friday, January 6 in a conference room at Trump Tower in New York.  I was there with other Intelligence Community (IC) leaders to brief him and his new national security team on the findings of an IC assessment concerning Russian efforts to interfere in the election.  At the conclusion of that briefing, I remained alone with the President-Elect to brief him on some personally sensitive aspects of the information assembled during the assessment.

“The IC leadership thought it important, for a variety of reasons, to alert the incoming President to the existence of this material, even though it was salacious and unverified.  Among those reasons were: (1) we knew the media was about to publicly report the material and we believed the IC should not keep knowledge of the material and its imminent release from the President-Elect; and (2) to the extent there was some effort to compromise an incoming President, we could blunt any such effort with a defensive briefing.”

Comey let Trump think he was not personally under investigation. What Comey apparently did not tell Trump was that two months previously he signed off on a FISA application using that “salacious and unverified” dossier largely as the basis for the warrant. It also appears that the FBI did not inform Trump of the FISA Court that the dossier was unverified and was paid for by the Clinton campaign and the DNC. Unverified information is not supposed to part of a FISA request.

The FBI reportedly used the explosive, unverified dossierdetailing President Donald Trump’s alleged ties to Russia to bolster its case for a warrant that would allow it to surveil Carter Page, an early foreign-policy adviser to Trump’s campaign.

It’s a key signal that the FBI had enough confidence in the validity of the document to work to corroborate it and present it in court.

“In my long experience in dealing with FISA processing, unconfirmed information about a potential target cannot (and has not been) included in the application,” said John Rizzo, the former acting general counsel of the CIA.

It appears that this time things were different. But then, the obama administration has a long history of FISA abuse.

According to Andrew McCabe, the only thing that was verified in the dossier was that Carter Page went to Russia. The rest remains unverified- and salacious. And the principal basis for the FISA application. Byron York:

On the other hand, the suggestion that Page’s history was vitally important seems off base. After conversations with multiple sources, it appears the FISA surveillance application relied on five categories of information: 1) the dossier; 2) a Yahoo News article based mostly on the dossier; 3) the George Papadopoulos case; 4) Page’s history; and 5) a general survey of Russian bad deeds.

According to those sources, the dossier made up by far the largest part of the case for wiretapping Page. The Yahoo story was “cited extensively,” as well. The Papadopoulos case, Page’s history, and the general discussion of Russian ill will made up a much smaller part. So it appears the memo was correct when it described the dossier as an “essential” part of the warrant application. Still, even though Page’s history was a relatively small part of the story, the House should have mentioned it, if only to address the FBI’s concern about leaving a material fact out of the memo.

So those are some of the objections and questions raised about the House memo. Though repeated loudly and often, they don’t have much merit, and the memo’s key assertion — that the unverified, oppo-research dossier played an essential role in securing a warrant to wiretap Carter Page — appears sound.

About that obstruction of justice charge:

RISCH: Thank you. All right. So those three things we now know regarding the active measures, whether the president is under investigation and the collusion between the trump campaign and the Russians. I want to drill right down, as my time is limited, to the most recent dust up regarding allegations that the president of the United States obstructed justice. Boy, you nailed this down on page 5, paragraph 3. You put this in quotes. Words matter. You wrote down the words so we can all have the words in front of us now. There’s 28 words now in quotes. It says, quote, I hope — this is the president speaking — I hope you can see your way clear to letting this go, to letting Flynn go. He is good guy. I hope you can let this go. Now, those are his exact words, is that correct.

RISCH: You wrote them here and put them in quotes.

RISCH: Thank you for that. He did not direct you to let it go?

COMEY: Not in his words, no.

RISCH: He did not order you to let it go?

COMEY: Again, those words are not an order.

RISCH: He said, I hope. Now, like me, you probably did hundreds of cases, maybe thousands of cases, charging people with criminal offenses and, of course, you have knowledge of the thousands of cases out there where people have been charged. Do you know of any case where a person has been charged for obstruction of justice or, for that matter, any other criminal offense, where they said or thought they hoped for an outcome?

COMEY: I don’t know well enough to answer. The reason I keep saying his words is I took it as a direction.

COMEY: I mean, this is a president of the United States with me alone saying I hope this. I took it as, this is what he wants me to do. I didn’t obey that, but that’s the way I took it.

RISCH: You may have taken it as a direction but that’s not what he said.

COMEY: Those are his exact words, correct.

RISCH: You don’t know of anyone ever being charged for hoping something, is that a fair statement?

Evelyn Farkas  blurted out confirmation that the obama administration was already spying on Trump and his campaign:

“I was urging my former colleagues and, frankly speaking, the people on the Hill… get as much information as you can,” Farkas said, adding that her big fear was “if [Trump staffers] found out how we knew what we knew about their … the Trump staff dealing with Russians — that they would try to compromise those sources and methods, meaning we no longer have access to that intelligence.”

I believe Comey was fired for his duplicity. He refused to “let Flynn go”  while he clearly let Hillary go. She actually committed a crime. Comey was determined to keep Clinton out of legal jeopardy and keep Trump in it.

Speaking of obstruction, my favorite news item of late is the breathlessly reported claim that Hope Hicks “could be contemplating obstructing justice,’’

I would like very much for someone to cite for me the Federal Statute concerning the Contemplation of Obstruction of Justice.

It would be very illuminating to have the FISA application made public- in fact, all four of them. Then we could all see what was included and what was omitted. Additionally, the release of Andrew McCabe’s testimony would also set many things to rest.

What are the odds democrats agree to that?

PS Over at Breitbart, Aaron Klein has some great questions.

Apparently, Comey remained behind, alone, with Trump on his own volition. Trump didn’t tell him to. Then, according to Comey, Trump said he hope he would drop the harassment of Flynn… something every American but for those who would like to see someone ruined if it would in some way stain Trump would like to have seen.

Comey doesn’t even try to convince anyone Trump issued an order to leave Flynn alone and, apparently at the time, Comey did not take it as such. Certainly not an order on the level of Lynch’s order to call the “investigation” of Hillary a “matter”.

Some say the dossier was not the prime evidence for spying on Page. Here is cited the dossier. Also cited is the Yahoo story… which the FBI knew came FROM Steele, just like the dossier. Then, “someone” saying they overheard Papadopous talking about emails while drinking.

Wow. That’s solid. Who can question that?

If crooked Hilary was involved, you can bet a crime was committed.

Recall Hillary getting her hands on all those FBI files on Reagan and Bush personnel, which she left laying around the White House. Seems she and the FBI have a long history.

Dose the FBI need a new Janitor for the J.Edger Hoover Building? Comey just like apply for the job

@Spurwing Plover: He would leak all the disinfectant out.