This all but screams conspiracy 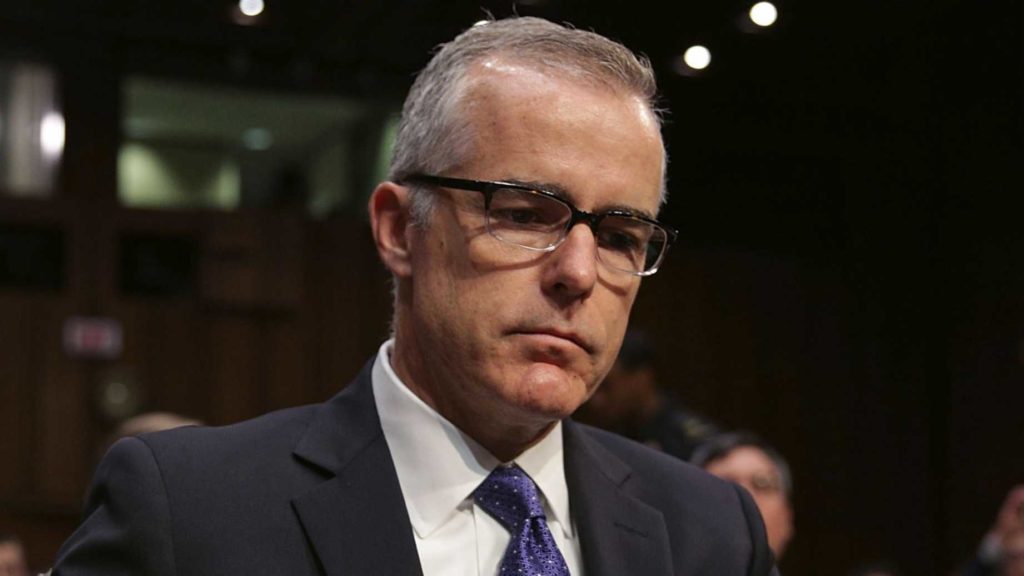 Left wingers in Congress and the media are in full blown panic mode and right this minute are stomping their feet over the removal of Andrew McCabe from his position at the FBI. Both Carl Bernstein and Chris Matthews are characterizing it as a “Saturday Night Massacre.” That signals their game plan for the coming disaster they are soon to have on their hands. Nancy Pelosi is close to being aphasic.

Jake Tapper has abandoned all his journalistic cred in favor of editorializing:

“Leading the Russia investigation could be hazardous to your career,” Tapper said at the top of the hour.

Tapper went on to note how Trump attacked McCabe multiple times over the past few months, which comes after the president fired James Comey in connection with ongoing investigations into Russia’s 2016 election interference. McCabe’s ouster comes after Trump reportedly asked McCabe who he voted for, and, according to a separate report, told the FBI deputy director to ask his wife how it feels to be a loser.

This is all nonsensical and irrelevant. Let’s back up a second.

Firstly, it had been reported that Christopher Wray had threatened to resign if Sessions (not Trump) went ahead and fired McCabe.  So that didn’t happen. Wray was invited to come to the White House and read the memo for himself. The next day McCabe was gone. It has been widely characterized as “stepping down” but it seems the reality is that he was “removed” from his position. It’s worth noting that Nunes asked Wray to vet the document:

House intelligence committee Chairman Devin Nunes showed FBI Director Christopher Wray the memo on Sunday after Rep. Trey Gowdy (R-S.C.) pressured him to share its contents with the bureau, two people familiar with the meeting said Monday. Gowdy also wanted Nunes to let Deputy Attorney General Rod Rosenstein see the memo too, but he did not join them Sunday.

In their meeting, Nunes told Wray he could flag any factual errors, national security concerns or material that could put FBI sources at risk, according to the people familiar with the meeting.

What Adam Schiff says means nothing.

Now let’s review how we came to this. Andrew McCabe was tainted before the election. The Clinton mafia did him a favor and there is no doubt they expected something in return:

By now you know that long time Clinton confidant and Virginia Governor Terry McAuliffe used $467,500 of his PAC money to “help” Jill McCabe, the wife of FBI agent Andrew McCabe in her bid for Congress. The Virginia Democratic Party, virtually controlled by McAuliffe, tossed in another $200,000. The money began flowing into the McCabe campaign coffers, in another one of those galactic coincidences, at the same time the FBI investigation into Hillary Clinton was initiated in July 2015.

So let’s recap with my untrained eye. Hillary Clinton does a fundraiser for Common Good VA to raise money that is given to the campaign of the wife of the head of the FBI Washington DC field office who is unexpectedly promoted to Number 3 person at the FBI who after his wife’s loss in the election is promoted to Number 2 at the FBI and placed in charge of the Hillary Clinton investigation who then finds no reason to prosecute her.

He was in bed with them. Now let’s overlay a Strzok text:

“I want to believe the path you threw out for consideration in Andy’s office – that there’s no way he gets elected – but I’m afraid we can’t take that risk,” Strzok texted on Aug. 15, 2016. “It’s like an insurance policy in the unlikely event you die before you’re 40.”

Some lawmakers believed “Andy” to be a reference to McCabe.

McCabe should immediately have recused himself from the investigation. it is simply not believable that he would not foresee the optics of his remaining. And that’s the clincher.

McCabe should have removed himself from anything to do with either Clinton or Trump. He should have stayed a mile away. The conflicts of interest are brutal.

But he didn’t. As we have said here often, had hillary won none of this would have seen the light of day.

democrats are constantly calling for allowing Mueller to finish his job unimpeded. One would think they would be content to let this investigation finish unimpeded as well. That they are so frazzled now is revealing.

Andrew McCabe bet that hillary would win the election. He lost that bet, and has damaged his Bureau in doing so. It is imperative that the investigation continue and clean out the infection at the FBI and restore America’s confidence in it. The good people who work there deserve this much.