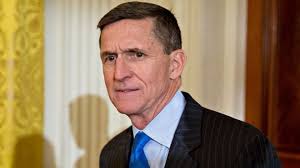 On January 24, 2017 Michael Flynn was interviewed by the FBI. He was a victim of entrapment.

Two people familiar with the matter said Trump was unaware that Flynn had spoken with the FBI until two days after the interview took place. An attorney for Flynn did not respond to a request for comment on this story.

A brief phone call from the office of Andrew McCabe, the deputy FBI director, to a scheduler for Flynn on Jan. 24 set the interview in motion, according to people familiar with the matter. The scheduler was told the FBI wanted to speak with Flynn later that day, these people said, and the meeting was placed on Flynn’s schedule. The scheduler didn’t ask the reason for the meeting, and the FBI didn’t volunteer it, one person familiar with the matter said.

Later that day, two FBI agents arrived at the White House to speak with Flynn. A lawyer for the National Security Council typically would be informed of such a meeting and be present for it, one person familiar with the procedures said. But that didn’t happen in this instance, and Flynn didn’t include his own personal lawyer, two people said. He met with the two federal agents alone, according to these people.

“No one knew that any of this was happening,” said another senior White House official who was there at the time.

“Apparently it was not clear to Flynn that this was about his personal conduct,” another White House official said. “So he didn’t think of bringing his own lawyer.”

He didn’t bring a lawyer, which made the job of inducing Flynn to incriminate himself a cinch. The motivation to do so by at least one of the interviewers was more than apparent.

The interview was kept secret for two days.On December 1, 2017 Flynn pleaded guilty to one count of lying to the FBI. Flynn was charged with lying about doing something that was entirely legal.

The charge to which retired Lt. Gen. Michael Flynn has pleaded guilty may tell us a great deal about the Robert Mueller investigation.

The first question is, why did Flynn lie? People who lie to the FBI generally do so because, if they told the truth, they would be admitting to a crime. But the two conversations that Flynn falsely denied having were not criminal. He may have believed they were criminal but, if he did, he was wrong.

Consider his request to Sergey Kislyak, the Russian ambassador to the U.S., to delay or oppose a United Nations Security Council vote on an anti-Israel resolution that the outgoing Obama administration refused to veto. Not only was that request not criminal, it was the right thing to do. President Obama’s unilateral decision to change decades-long American policy by not vetoing a perniciously one-sided anti-Israel resolution was opposed by Congress and by most Americans. It was not good for America, for Israel or for peace. It was done out of Obama’s personal pique against Israeli Prime Minister Benjamin Netanyahu rather than on principle.

“He may have believed they were criminal”

Indeed. And given the interviewer, it would shock no one to learn that the agent led Flynn believe it was criminal. The interviewer had “unfinished business” and needed to “protect the country” from Donald Trump with an “insurance policy.”

Flynn was had and Strzok, fresh off writing Comey’s exculpation of Hillary Clinton, knew exactly what he was doing. One cannot help but notice that the the texts between Strzok and his paramour are missing for this critical period.

Clearly, Flynn was a step on the ladder to eventually ensnare Trump and force him from office for the crime of defeating Hillary Clinton in the election. Let’s be honest- Trump has been framed. The problem for the FBI now is that this is fruit of the poisoned tree. Not only was Strzok biased but his bias affected his performance. Flynn was entrapped. The conviction should be thrown out of court.

Exit question: If they’re missing, how does anyone know that there are 50,000 texts missing?

I have always thought the FBI was basically a non party organization, but now it’s clear that it is highly Democratic. Many acts seem to be unethical and perhaps illegal.

@Redteam: The deep state was and has been for 70 years or more a New or One World Order organization, if the were democrat why kill the Kennedys?

All of which makes it very important that Trump is very cautious in his approach to any interview with Mueller. It will be the primary objective of this witch hunt to get Trump in some sort of perjury (despite allowing Hillary to destroy evidence, lie and stonewall without consequence) on some minor, stupid issue like how many people showed up for the inauguration. If the trap laid for Sessions, where he was specifically asked about meeting with Russians to discuss campaign issues then he was accused of lying for not revealing meetings that occurred in the line of duty, is any indication, there are a million ways to construct a trap for perjury and no doubt a “secret society” would strive to score their liberal points for their liberal followers. Any deviation from minute facts (dates, times, who was present at what meeting when) would be hailed as perjury and grounds for impeachment. Instead of coming to the inevitable conclusion that Trump won fair and square, the sore loser crybaby masses will be reinvigorated and begin their sky-screaming anew.

If they meet, he should get the questions in writing before the interview and there should be no deviation from the list of questions allowed. After all, why would Trump get different treatment than Hillary or any of the members of her gang?

@Bill… Deplorable Me: The Prez should tell them to kiss his lily-white-bumakin.

@kitt: Well said Kitt. If President Trump does not need to testify to this kangaroo investigation then I say don’t!! Politically his base will continue to count their gains and life will go on!!

@Common Sense: There is an argument in favor of NOT testifying since no matter WHAT he does, the left will denigrate it. So, why do the open, transparent and honest thing if not doing it will get the same reaction from liberals?

@Kitt: I agree it’s a ‘one world order’ thing, but for some reason JFK didn’t want to play ball, even though his father was very involved in the OWO. The OWO wanted a war in Vietnam, JFK was working against that. There will not be a period of time that there is no unrest anywhere in the world, it is needed to ‘allow for’ some political changes. The OWO severely underestimated the odds of Hillary not winning the election. Trump will be okay as long as he does not go ‘against’ the OWO. He just needs to remain relatively neutral.
Edit: OWO seems to kinda have come into being in time to create the Great Depression and get the world into WWII. Fortunately, for the US,, FDR died before their complete takeover and Harry Truman helped to get a lot of the Reds out of Washington and then the popularity of Ike got him elected and further delayed the OWO’s plans. LBJ played politics with them.

@Redteam: Lyndon was put in power by them he saw close up and personal what happens when you dont play nice.
Oh where oh where have our little trolls gone oh where or where can they be. Bush Sr, was at the book repository the day JFK was murdered, was taken in for questioning by the Dallas PD. Everyone remembers what they were doing that day except him. He didnt even remember he was in Dallas. https://whowhatwhy.org/2013/10/02/bush-and-the-jfk-hit-part-3-where-was-poppy-november-22-196
Hale Boggs is the Clinton link to the warren commision aceptance of the magic bullet. Guess who dropped Boggs at the airport the night of the crash.

@kitt: I think Bush Sr was a member of the CIA crew that handled the overall planning and strategy of the assassination, but they likely had nothing to do with the OWO overall plan. It made covering up the murder much easier with LBJ in office, he wanted the job so badly to prevent going to prison. It had nothing to do with Republican or Democrat. The OWO is made up of both sides. If constant unhappiness with government weren’t available, it would be much harder to get major change done. I don’t see ‘acceptance of STB’ as important to the assassination. Everyone with a functioning brain knows that there were more than one shooter.

which crash? Boggs was just one of the useful idiot tools of the OWO.

Footnote: While reading up on this, it says he died in a private plane crash in Alaska while campaigning for re-election as a Rep. from Louisiana. What? Did they move Alaska to Louisiana?

@Redteam: Sign ze paper, Congressman Hale Boggs was the only dissenting member of the Warren Commission who refused to sign the Warren Report. His aircraft was never found could be he had plastic surgery and vanished with a nice Caymen account. Or was ready to squeal and with global warming they will find him in some glacier in hand cuffs. OWO has no Party the just give going away ones.

[…] is a pompous lying jackass who needs a good enema. Mueller should also get one. Flynn was framed- as I said nearly a year ago. Mueller then went on to ruin Flynn financially and finally got Flynn to cop a […]