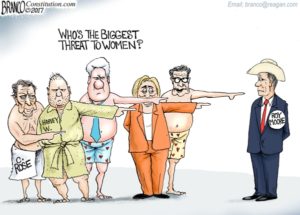 Happy Saturday – straight to the crazy, starting with going back in time!

Last month marked 100 years since the Bolshevik Revolution, though college culture would give you precisely the opposite impression. Depictions of communism on campus paint the ideology as revolutionary or idealistic, overlooking its authoritarian violence. Instead of deepening our understanding of the world, the college experience teaches us to reduce one of the most destructive ideologies in human history to a one-dimensional, sanitized narrative.

11/27 – Border Patrol Agent Deaths in the Line of Duty

As much as I love Economics, sometimes it oversimplifies a problem to a few numbers that ignore other parts of the story. This piece is fairly short read, well written and well researched, and unfortunately grossly oversimplifies a serious topic.

11/28 – Remember, it Was Obama Who Started Complaining About Fake News

In the words of the great Robert Ellsworth, “They started this, WE say when it stops!”

Following on last week’s story about Jimmy Kimmel sending some of his goons to disrupt a church service where Roy Moore was asked to attend, I have an idea for Kimmel to improve his ratings – he should go and be a similarly disrespectful (rectal cavity) at a mosque. I promise I’ll tune in to see what happens!

Remember Linda, there are five Os in “But The Jooooos”!

12/1 – Ever wonder how the political Left got so much money?

A great short video from The Capitol Research Center. This is also a good site to add to your bookmarks.

Aaaand it looks like we’re on the road to adding “alt-right” to the list of labels Leftists like to hurl that will be meaningless in a few years. Seriously, remember nine years ago when being called a racist sent Conservatives scurrying? Now when Leftists try playing the race card we just laugh in their faces! Or to go back into the Brother Bob archives from 2012, I just say “Thank you”.

Tucker Carlson made this point as well a few days ago. As much as I hate considering defending these left wing scum, this is not a good standard to set.

This comes off as kind of petty and obnoxious, and I have no problem with throwing the Radical Left’s pettiness back at them

It’s about the DC school system. When you read those words you already know it’s going t be bad, but even I was surprised by this one.

Am I the only one who’s looking forward to the day that some utility company gets fed up with these green weenies and goes Master Blaster on them? Embargo ON!!!

I’ll never understand why companies think that moves like this are a good idea.

Am I the only one who’d like to see people who preach for Socialism actually go to live in a Socialist state?

Wait a minute – how can we have a problem from something that the Radical Left has been howling for years doesn’t exist?

Stop me if you’ve heard this one before…

Conservatives could start blaming their political rivals and their policies for killing people, but that would be immature and unprofessional…

12/4 – Former Clinton Treasury Secretary Summers: 10,000 Will Die EVERY YEAR Thanks To Tax Reform

So much for maturity! While this link is a good read, Ben Shapiro misses what could be a great counter point. When lefties accuse our policies of killing people can we get some numbers on how many people died when Obamacare took away the plan they liked or the doctor they liked? How about how many died because they couldn’t afford their new premiums or deductibles? This has potential!

As I’ve said many times before, I fully support every gay couple’s right to marry in the mosque of their choice or to have their wedding cake made in the Muslim-owned bakery of their choosing. For some reason my Lefty pals get really quiet when I offer this modest proposal

Are Democratic Congressman John Conyers and Senator Al Franken giving Alabama Republican voters psychological “permission” to vote for Roy Moore? Is there a similar effect for other Republican party leaders?

I don’t like this at all, but if the Democrats don’t give a damn about how their leaders treat women, why should our side let them weaponize Conservatives’ natural sense of decency against us?

Bill Clinton’s decline continues as he starts using some Deplorable language in the NYT. Back during the DNC primary I questioned if Hillary’s Tea Party connections would come back to haunt her.

Damned straight! Wait a minute – somebody got paid to “study” this? Crud, next time I’ll happily throw a beef and beer for half the cost that will prove the same thing!

I say we take off and nuke the entire CFPB from orbit. It’s the only way to be sure.

Nothing says “settled science” like crying “How dare you question my shoddy research – I’m going to sue!”

“I respect women. I don’t respect men who don’t.” In other words Al, you don’t respect yourself? Don’t worry, none of us do either!

Today is the Palestinians’ “Day of Rage” over the United States recognizing Jerusalem as the capital of Israel, marked by angry mobs, violence, and chants of “We don’t need empty words, we need stones and Kalashnikovs.” The other name for days they do this is “Friday.”

And ICYMI, I weighed in on how wrong the Radical Left is in thinking that Franken’s resignation gives them the moral high ground. But don’t worry, I offer a constructive solution!

If America can be killed because of tax cuts, maybe, just maybe, relying on the federal Leviathan for everything from healthcare to retirement is a mistake.

Just setting the record straight: the #TeaParty groups I was involved with 2010-2014 were comprised of some of the finest patriots and small-r republicans I’ve ever met. And they were treated with scorn and hostility by the GOPe, which now wonders why it got Trump.

Romney showed what kind of person he’d be in 2012.And he was still accused of wanting to re-enslave black people.

The treatment of McCain and Romney is how we got Trump. https://t.co/oqmU49n52k

FOX NEWS, SUSAN HIRASUNA TRIES GRILLING ME ABOUT MY AL FRANKEN BILLBOARD BY ASKING WHY I DIDN’T GO AFTER TRUMP AS WELL. https://t.co/4onwMoZdaw

I figured out how to get the left to come around on these “Bake the Cake” cases: pass a law requiring attorneys to take all cases brought to them, and require them to advocate against their sincerely held beliefs. Make the ACLU take gun-rights cases. Practicing law is not speech!

Lisa Simpson’s real future? Paying off a $300k student loan for a degree in Whining Studies by working at Krusty Burger

The Bible is crystal clear on Christ’s views on the exact right American marginal tax rate, but super fuzzy on sexuality and killing babies. https://t.co/FPDur0T8MZ

Franken.
Franks.
Are we doing this alphabetically?