No Democrats, You Don’t Have the Moral High Ground. You’re Not Even Close 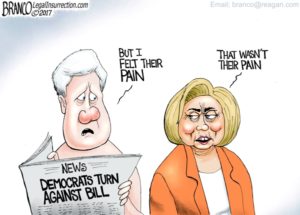 The latest casualties in the Pervnado of the last few months, John Conyers and Al Franken, appear to be products of the Radical Left’s fear that Roy Moore is going to win his special election in Alabama, despite what appear to credible allegations of harassment against Moore. The Radical Lefts new narrative seems to be, “We supported these guys until we learned that they were bad people. Now you’re going to elect this creep even though you know about his past? Shame!”

What our Lefty pals seem to misunderstand is that our response is simple, “Yes we know. And f*** you. You made this OK.”

Why would this be OK? Let’s look at the end game here – what the Radical Left sees are (what someone on Facebook wrote who I can’t remember for attribution) two easily replaced Pawns in safe seats that they’re offering to sacrifice in exchange for a Bishop. This has nothing to do with decency, it’s about power. How do we know?

Surely you know the good senator from New Jersey – the one who just got off of multiple corruption charges thanks to a hung jury, of which the charges included… soliciting underage prostitutes. You’ll notice that you haven’t heard much about Bob in the news, and there’s a reason. You see, through a historical fluke Jersey elected a Republican Governor 8 years ago in Chris Christie. And of course, if Bob were to resign his replacement would be appointed by the governor, and would most likely be a Republican. So of course, the Radical Left’s sudden moral high ground and indignation comes to an abrupt halt when it could hurt their own power. Yes, it’s as simple as that.

Of course, the end game of this Pervnado chess game is seen in calls for President Trump to resign over the harassment claims against him, starting with Senator Chavez from Vermont. Personally, from his personality I’d believe these charges against our president, except that I don’t because I don’t think his accusers are credible. And I’ve reached that conclusion without knowing anything about the accusers, aside that one or two are Clintonistas. Why the skepticism, you say? Because given how much our press loathes Trump and have a “facts be damned” approach to trying to destroy him, if any of the accusers were credible they would have been elevated to sainthood status and a mascot for Democrats. And yes, I know that’s a horrible reason to reach my conclusion but that’s the world that the people who tell me I should hate Trump as much as they do have created.

So you’ll have to forgive me if I doubt the Radical Left’s sincerity over these newfound principles of theirs. It’s nothing but a power play, hoping to use deceit to weaponize Conservatives’ natural decency against us. That won’t be happening. The bottom line is that while we dislike supporting someone like Moore, we like you even less. But I’d prefer to live in a world where we can agree to condemn bad behavior and apply the rules equally. You want us to universally condemn Moore? OK, here are our terms, and you’re not going to like them.

First, the easy part. Menendez resigns, and he does it while Gov. Christie can appoint his replacement before the end of the Governor’s term in January. I know you hate this because you feel that we’re on the edge of The Apocalypse happening because of whatever Trump did that has you angry this week. You need every possible vote for #TheResistance to subvert a legally elected president and subvert our Democracy. This means that every vote in the Senate counts, and losing a Democrat in New Jersey will make it easier for President Trump to push his radical agenda of crazy things like letting the American people keep their own money, getting the government’s regulatory boot off of the country’s throat, not apologizing for our country’s existence, etc. I know that this will be extremely painful for you, but if you want us to take you seriously this is a critical first step. Oh, you thought that was it? We’re just getting started!

You want to call a president unfit for office because of charges of harassment against him? I’m actually OK with this, but before we do that we’ll need to clean your own house to show your sincerity. Bill Clinton is going to need to publicly apologize to every woman he harassed, as well as the one he raped. Hillary is going to publicly apologize to each woman who she smeared or tried to intimidate into silence. This is important, because if you want us to renounce someone who was a sexual predator, you’re going to acknowledge that you knew about and ignored the fact that you supported the #1 enabler of the world’s most famous sexual predator. You don’t get to act all huffy about someone who said “Grab ’em by the p***y” while you were fine with someone from your side who actually did. Don’t worry, we’re almost done.

Some Democrat in Congress, doesn’t matter who, issues a proclamation condemning Ted Kennedy. This needs to be done loudly and publicly. Just like names attached to The Confederacy are getting erased from history, so must the same happen with this horrible human being. Feminist groups will be expected to lead the charge on this one. Hopefully you don’t need to ask why.

There are our terms. I’m fine with living in a world where our leaders are held accountable for their behavior, but you have to be too. If you don’t feel that this is acceptable, that’s fine. Just don’t be surprised when you question our decency and we just point and laugh at you. Because in the words of the great Robert Ellsworth, “We don’t care what you say…”

Apparently, Chris Matthews tried to share that thrill up his leg with a coworker. Trying to show the lady where you got the term “Hard Ball? I would envision any approach by that whiny idiot as harassment.