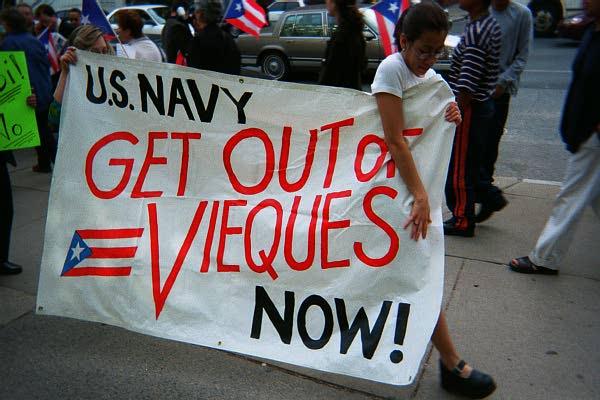 Clinton has been bashing Trump non-stop since the hurricane struck the island. Trump is “not interested” in talking about Puerto Rico says she. She’s “not sure” that Trump knows Puerto Ricans are American citizens. Brian Fallon, one of Hillary’s goons, tweeted

“Trump’s racist neglect of Puerto Rico is threatening lives. It’s time to start caring about the crisis there.”

Yet it is Hillary Clinton who made the Puerto Rican relief effort immeasurably more difficult.

In 1999, a US Marine pilot errantly dropped a bomb off the training range target in Vieques, killing a security guard. This was immediately seized upon by liberals:

Left-wing activists then woke up the ghosts of “colonialism” and flocked to Vieques, craving the headlines and raising dollars for their organizations.  Al Sharpton, Robert Kennedy Jr., actor Edward James Olmos and hundreds of others stormed the beaches to stop training exercises and then served jail time.  Congressman Luis Gutierrez, a Democrat from Chicago was also arrested.  Champion boxer Tito Trinidad wrote “Paz” on his wrist tape for matches.  Human rights activists from Guatemala’s Rigoberta Menchu to South Africa’s Desmond Tutu weighed in.  So did then-Senator Hillary Clinton, visiting Kennedy in a San Juan jail during 2001.

The Navy wanted to continue to use dirt-filled non-explosve ordinance but the then-Governor, Pedro Rossello, said that was “unacceptable.”

Over the almost unanimous objections of the senior military leaders, Clinton terminated the use of the bombing range. His decision was in accordance with the wishes of someone aspiring to become a Senator from New York.

She needed the Puerto Rican vote in New York and he owed her big time after she, er, swallowed her pride in the wake of the Lewinsky affair and stood by him.

Bowing to politics and his wife, Bill Clinton kept the range closed  Without the range, the Navy had no justification to maintain the Naval Base at Roosevelt Roads and it was closed in 2003.

The closure of the base resulted in a financial loss of approximately $300 million per year to the bankrupt Puerto Rican economy. The rest, as they say, is history. Today the base and surrounding area is a described as a “ghost town.” How much easier it would have been to bring in supplies via a functioning Naval Base?

Now we’ll never know, thanks to Bill and Hillary Clinton and Monica Lewinsky. The Clinton’s are the terrestrial version of the Ferengi’s, motivated only by profit as they leave destruction in their wake.

Hugh Hefner died this week.
I don’t think an autopsy was even done.
‘Cause he was 91.
But his last words were, “I have information that will send Hillary Clinton to prison.”

Susan Rice’s housekeeper was on a list to be interviewed by the FBI.
But she won’t make that appointment.
She was found dead.

We can lament many democrat mistakes made in the past, spilled milk, we did nothing to correct them since. Seems every time we give in and give them their stompy foot way it has real bad results.
With a modernized infrastructure and tax lures this could be a retirement paradise a tourist magnet. I dont know if you can ever teach socialists fiscal responsibility.

@Nanny G: OK, just made a meme of that and posted it on my Facebook. Good one.

Charlie Rose is an ass kissing pbs for years. during the second Presidential debate he bad mouthed Trump as inadequate for the position of President.

so what ever happened to the million allegedly donated to Haiti under the whore dog clinton presidency?????

Susan Rice’s housekeeper was ALLEGEDLY not found dead. That’s being reported as fake news. I hope she goes to jail for the unmasking business, if not for the several other crimes she’s committed over the years, but the housekeeper business is supposedly fake.

@M0S #8541: Oh, that money donated to the clinton’s for Haiti is safe, all tucked away in their checking account.

@Deplorable Me: That news as real as the titties in the centerfold.

Back in the 50’s and I was in the Navy it was considered a trip to a tropical isle paradise to go to Puerto Rico. The dimocraps took care of that and made it into a tropical hell. The dimos basically made them into a communist system that totally depended on the government for their livelihood, maintaining the whole island infrastructure just so it would have an outstanding Naval facility there. No facility, no income, now they just clearly are dependent on the taxpayers of the US to bail them out of their total dependence.

I see no self reliance but thats not what will be shown, those that will boil water or distill it, none building makeshift roofs or temp shelters. Plenty know of their government are trying to get out. Cant cause military planes bringing in aid and workers clog the airports.