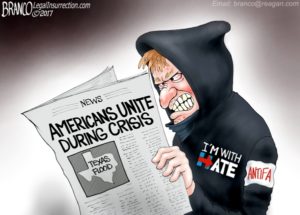 Welcome back, Mr. and Mrs. America, and all our ships at sea! Lots of crazy coming down, but first let’s hop in the Wayback Machine and grab a few stories from the previous week!

There is really nothing I can add to this.

It’s not as though envy serves as a worthwhile impetus for revolution. But one grasps that more easily than the convert-or-die-by-jumbojet-bomb mentality inspiring the 9/11 terrorists.

Privileged people imagine themselves as anointed to rule. When the world rejects their ideas, they lash out at the world. Brat-fits on the playground lead to brat-fits on a bigger playground. That happened 16 years ago in Manhattan, near the banks of the Potomac, and in southwestern Pennsylvania.

This almost reminds me of another group of people who’ve been in the news lately; if only I could put my finger on it…

ABC7 also found lawsuits against multiple other businesses in San Bernardino, Riverside and Orange counties – all related to offers, incentives and promotions given to women. ABC7 reached out to Rolando, who did not return our calls for a comment.

Me: I just don’t see any way Hillary could come off a more vile human being than she has already done time and time again.
Hillary: Hold my double scotch.
Me: You know it’s only 10:00 AM, right?

More hysterics from the Climate Cult? Must be a day ending in a “Y”!

I’ve got a feeling that this is far from the last time Hillary says something that looks like it’s from The Onion. Or that she was rambling while drunk at 10:00 AM.

I think that one of my favorite things about the Trump presidency is the honesty it’s brought out. Finally, Democrats feel completely comfortable wearing their anti-Christian bigotry on full display.

Today’s edition of “Not The Onion!”, although in California this is pretty much a daily occurrance

Ted Cruz should just say that tweet was liked by a computer-smashing intel-stealing IT staffer caught fleeing to Pakistan.